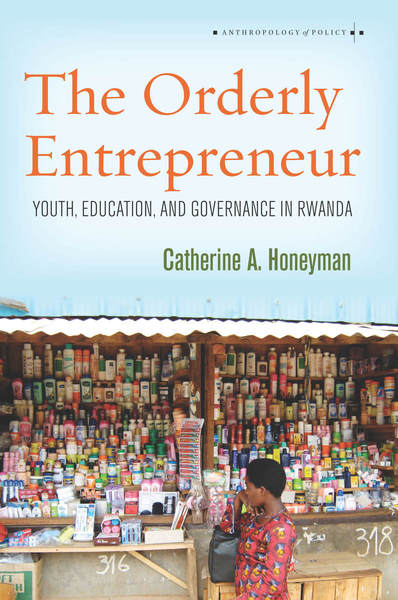 The Orderly Entrepreneur
Youth, Education, and Governance in Rwanda
Catherine A. Honeyman

A few miles outside of central Kigali, our car rolled through a rural town featuring the same cluster of businesses that one can find just about anywhere in Rwanda: tiny shops selling dry goods, a few places to get a cup of tea or fresh milk, and a group of youngish men waiting around for customers to ride on their bicycle taxis. Only the buildings painted with advertisements for a telephone company (bright yellow) and a popular kind of beer (bright blue) added variety to the otherwise dusty brown of all the buildings.

Past the trading center, my research assistant Flora and I continued along a rutted dirt road to a public school, where a few hundred students in uniform were leaving their classrooms to go home for the day. A small group of students remained, occupying the school canteen while they enjoyed a cup of sweet milky tea and square mandazi doughnuts.

These students were members of the first nationwide cohort to study the new course in entrepreneurship implemented by the Rwandan government in 2009, and they would soon graduate from Rwanda’s nine-year basic education cycle. Like their classmates, they had kindly agreed to participate in a focus-group discussion for this research. Our conversation began with the students talking about their families and their hopes for the future. For several minutes, they spoke passionately about the problem of youth unemployment and how it would affect them. “Who do you think is responsible for solving this problem?” we asked.

One student raised her hand: “It’s each one of us, personally. Maybe you don’t sit at home, [but instead] you go sell something [. . .] Create a job for yourself, selling. Or maybe go outside, because there are many people in the countryside that want things, for example cloth. You could go and bring things to sell even in the countryside, not just stay in the city.”

“Me, I think that people could make an association,” her classmate added. “Let’s say, groups of, like, ten people, to look for the kind of work they’ll do together.”

Nodding, another classmate continued: “Don’t refuse any job, do what you find. Don’t underestimate the value of a job, [be willing to] use your arms.”

These students had apparently learned their entrepreneurship lessons well. A consensus seemed to be developing among the group: the responsibility for solving Rwanda’s problems of youth unemployment falls on the individual; all the country needs are more entrepreneurial citizens who understand the value of hard work and take the initiative to create their own jobs.

Checking that we had understood their perspective, we asked one more time: “So—if you had to choose between, for example, the government, the wealthy, employers, or the population in general—who is most responsible for solving the problem of unemployment?”

To our surprise, four other students spoke up simultaneously, apparently directly contradicting their classmates’ earlier remarks. “It’s the government!” they exclaimed.

“Why the government? Let me hear each one of you,” Flora probed.

“Because it’s the government that makes the laws,” one student began. “They make it so that people come to a common understanding, and then that’s how [unemployment] can end [. . .] You see, the authorities, when they tell the population to do this and that—if they say to go make associations, then people will do it. But if they don’t say anything, then they aren’t giving you the right to do it. There could be a time that you create something without permission, and then it fails; you see that they have refused to allow you to do it. And then there are those taxes, too, and everything. But if they established a regulation to say that ‘such-and-such group will do this’—for example, weave people’s hair—then people will say, ‘let’s do that,’ and then they would get together to do it. In that case, poverty could be defeated and there would be work available.”

Again, other students in the group nodded in agreement. A new consensus had apparently been reached: solving unemployment in Rwanda depends not only on entrepreneurial initiative but also on government regulation and a population willing to be regulated.1

Self-reliant yet strongly state-regulated—this particular approach to entrepreneurship and national development is a recurring theme in Rwanda today. In government offices and in policy meetings, on radio and in the newspapers, in the classrooms of every secondary school, and in towns and cities around the country, this same idea is disseminated, discussed, encouraged, and enacted. To understand the outlook for youth livelihoods and even personal identity in contemporary Rwanda, one must first explore this intriguing paradox: in Rwanda, calls for greater entrepreneurial self-reliance and creativity jostle elbow-to-elbow with expectations of increased governmental regulation and controls. What that paradox looks like in practice—and whether it is viable in the long term—is the question at the heart of this book.

Regulated Self-Reliance and the Orderly Entrepreneur

In much of the world, Rwanda is best known for its complex and emotionally fraught history; but what is happening in Rwanda today is no less significant. The first generation of children born after the 1994 Genocide against the Tutsi is just now reaching maturity, hoping to take up their adult roles in Rwandan society and economy. Rwanda’s postgenocide government is also forging an increasingly confident and independent path, characterized by its own emerging philosophy of business-friendly yet strongly state-regulated social and economic development. Even as some Western countries continue to debate the reasons for their recent economic crises, Rwanda has confidently settled on a strategy for twenty-first-century economic growth that draws on the recent experiences of a number of East and Southeast Asian regimes. Combining a strong-state “developmental” approach with certain entrepreneurial ideals learned from free-market neoliberalism, these countries are pursuing a new form of governance that is quickly rising to prominence on the global scene.

Conventionally, developmental and neoliberal approaches to governance have been framed as contradictory (Fishlow, 1994). Neoliberalism emphasizes free-market mechanisms and individual responsibility, and characterizes government as an obstacle to growth. In contrast, developmental states privilege state-centered economic intervention and planned development, with strong confidence in the guiding power of state regulations. Despite these apparent contradictions, however, a number of governments are experimenting with a combination of these two approaches, in what might be called a neoliberal-developmental (Liow, 2011) or post-developmental form of governance (Baildon, 2009; Ismail, Shaw, & Ooi, 2009; Ong, 2006).2 Regardless of the particular label one favors, a number of states with dramatic recent histories of economic growth—including Singapore, South Korea, China, Taiwan, and now Rwanda—seem to be converging on a style of governance that places an ethos of regulated self-reliance at its core.

The following pages explore how this rising style of governance takes shape in practice, as it is re-created in new contexts, and as it is interpreted and reinterpreted by policy makers and citizens alike. Using Rwanda as a case study, I examine the internal tensions of the post-developmental state through an investigation of one iconic policy initiative—the Rwandan government’s decision that a course in entrepreneurship should be required learning during all six years of secondary school. This policy, I argue, exemplifies how transformations in economies and governments are often deeply intertwined with learning processes—both within and outside school walls.

In late 2007, the Rwandan government published a new national policy document, the Economic Development and Poverty Reduction Strategy (EDPRS) for 2008–2012. Among hundreds of recommendations, the EDPRS document called for the secondary school curriculum to be revised in order to include entrepreneurship as a major topic of instruction (Rwanda, 2007). As a result, when today’s Rwandan secondary school students graduate, they have spent nearly five hundred hours learning about entrepreneurship over the course of six years of required classes. During that time, they have learned about entrepreneurial qualities such as initiative and creativity, and they have been introduced to the basics of business planning. They have studied various forms of commerce, basic commercial law, and accounting methods. Yet they also graduate into an economic context in which many formerly common microscale enterprises are now illegal or discouraged, in which some rural forms of entrepreneurship are channeled into specific mandated activities, and in which government oversight of business registration and taxpaying is increasingly far-reaching and effective.

On the one hand, this policy of entrepreneurship education suggests that young Rwandans should be self-reliant; creatively and resourcefully finding their own ways to make a living and move ahead. On the other hand, the same policy—along with Rwanda’s extensive regulatory regime—insists that this very entrepreneurial resourcefulness must be orderly, regulated, and to some extent strategized and planned from above. Today’s Rwandan secondary students, in short, are expected to become a generation of orderly entrepreneurs.

1. From a focus group discussion with female Senior 3 students in School A, August 30, 2010. Students were divided by gender for all focus-group discussions to increase the likelihood that they would express themselves freely.