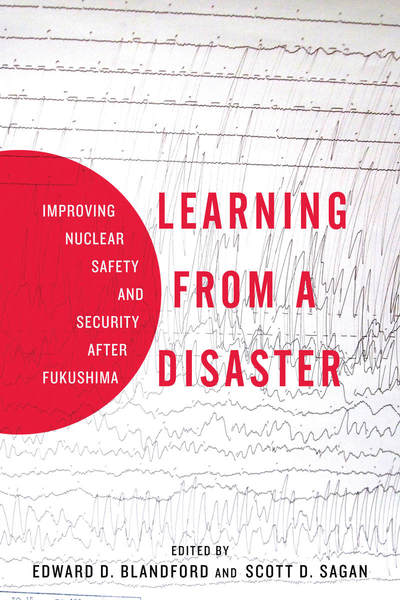 Learning from a Disaster
Improving Nuclear Safety and Security after Fukushima
Edited by Edward D. Blandford and Scott D. Sagan

The introduction discusses four ways in which this book in unusual and valuable: 1) it focuses not on the causes of the Fukushima nuclear accident, but rather on what lessons should and did the Japanese government and other actors learn from the event; 2) the Japanese and American authors present diverse perspectives from different disciplines, including physics, political science, nuclear engineering, and history; 3) the book analyzes both nuclear safety and nuclear security lessons learned (and not learned); and 4) the authors range from being strong advocates of nuclear power to agnostics to skeptics about nuclear power.

This chapter provides an overview of the Fukushima nuclear accident that began onMarch 11, 2011, triggered by the Great Tohoku Earthquake and tsunami. It provides a narrative of the main events at the plant as they unfolded during the first few days of the disaster, during which the reactor meltdowns and hydrogen explosions occurred at the Fukushima Daiichi power station.

2 The Accident That Could Never Happen: Deluded by a Design Basis  Gregory D. Wyss
chapter abstract

This chapter describes two fallacies that occur frequently in the development and application of design bases for high-consequence facilities such as nuclear power plants. These fallacies led many of the designers, operators and regulators of the Fukushima Daiichi plant to believe that a tsunami of the magnitude experienced onMarch 12, 2011 would not be credible. These fallacies and the events surrounding the Fukushima Daiichi accident point to eight safety lessons and three security lessons that should be applied for the design, operation, and regulation of all high-consequence facilities in order minimize the potential for future catastrophic events. Thechapter also describes how design bases can either enable synergy or cause conflict in the interplay between safety and security in system design. Thus, proper formulation of and conflict resolution among competing design bases are key elements of the emerging discipline of Safety, Safeguards, and Security by Design.

This chapter analyzes the sources of emergency response failures during the Fukushima nuclear crisis. The emergency response was plagued by miscommunication between leaders and technical experts. In addition, institutional mechanisms to support the political leadership did not function as they were stipulated in crisis management manuals of the government and TEPCO. Finally, inappropriate risk assessment prevented political leadership from reacting to the unfolding crisis. The dysfunction of leadership during the Fukushima nuclear crisis was a product of the myth of absolute safety and regulatory capture.

This chapter discusses radiation protection in Japan regarding the Fukushima Daiichi nuclear power plant accident, with a focus on the use and abuse of numerical guidelines called reference levels. Informed by historical and sociological studies of administrative standards, the chapter traces the process in which the Japanese government consistently used the reference levels in such a way as to exclude backup plans and informed choices on the part of citizens in a wide range of practices from evacuation to decontamination. It also shows that the Japanese government became a victim of its own policy, lowering the reference levels to restore public trust and belatedly realizing that it could not deliver the promised results. It concludes that the fundamental cause of radiological mismanagement lay in the excessively top-down structure of administration in Japan, and argues for de-centralization and accountability to correct overreliance on numbers.

This chapter discusses why Japanese nuclear authorities have not learned from past experiences, both in Japan and other countries, and identifies how organizational learning failures led to inadequate safety and security measures in advance of the severe accident at the Fukushima Daiichi power plant in 2011. It focuses on Japan's failure to learn from external cases, including the so-called B.5.b measures, International Atomic Energy Agency (IAEA) peer review, and the role of industry in the nuclear safety community in other countries. It argues that Japanese nuclear safety system was isolated from international standards and did not reflect newer global safety protocols. The so-called "myth of safety," lack of a sense of security, complexity of administrative structure, and confusion of responsibilities were named as the reasons why Japanese nuclear safety system could not learn from other countries.

This chapter examines the vulnerability of nuclear power plants worldwide to adisaster like the one that occurred at Fukushima Daiichi. Examination ofJapanese nuclear plants affected by the earthquake and tsunami on March11, 2011, shows that three variables were crucial at the early stages of the crisis: plant elevation, sea wall elevation, and location and statusof backup generators. Higher elevations for these variables, orwaterproof protection of backup generators, could have prevented thedisaster. We collected information on these variables, along withhistorical data on run-up heights, for 89 coastal nuclear power plantsin the world. The data shows that: 1) Japan was relatively unpreparedfor tsunami in international comparison, but there was considerablevariation for power plants within and outside of Japan; 2) Older powerplants and plants owned by the largest utility companies appear to havebeen particularly unprotected from inundation.

Conclusion: Beyond Fukushima: Enhancing Nuclear Safety and Security in the 21st Century  Michael May and Edward Blandford
chapter abstract

The conclusion reviews the main themes relating to the March 11, 2011, Fukushima nuclear accident that appear throughout the edited volume. These themes include Japan's overreliance on rigid standards in emergency preparedness and the myth of absolute safety as a source of that rigidity. The conclusion also discusses ways to deal with risk and uncertainty in both routine and emergency situations as well as the need to adapt standards to differing local situations. Also analyzed are the synergies between safety and security, the difficulties of transnational learning from previous incidents, and the comparative vulnerability to flooding of nuclear reactors worldwide.