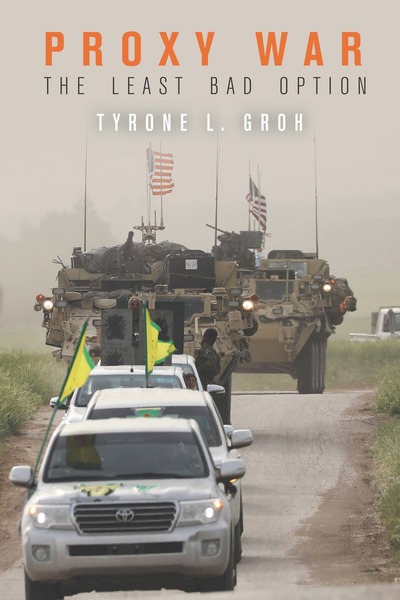 This chapter introduces the book and focuses on the need for a pragmatic yet rigorous study on proxy war. The chapter explains how the term proxy war carries a lot of baggage and how its usefulness has been overblown, largely due to Cold War influences that continue to dominate the contemporary view of indirect interventions involving a third party to influence civil affairs abroad. This view is antiquated and dangerous. Using proxy war as a means of indirect intervention requires considering both the policy's utility—a short-term view that determines if a proxy can provide the ability to intervene—and the efficacy—a long-term view that evaluates the likelihood that supporting the chosen proxy can produce a desirable outcome. Proxy war offers an opportunity to help manage some of the uncertainty associated with indirect intervention, but is rarely a low-cost policy and it is never risk free.

In this chapter, the book proposes four general categories that represent the barriers that lead states to choose indirect intervention: (1) the risk of escalation, (2) a lack of domestic support, (3) a lack of international support, and (4) a lack of capacity. Facing these restrictions, states must decide how much control they desire over the outcome when intervening indirectly. Further, the chapter suggests that proxy war is only one means of indirectly intervening in the affairs of another state and can be broken down into two general types: donated assistance and proxy war. Lastly, the chapter offers a new typology for proxy war (in it to win it, holding action, meddling, and feeding the chaos) and explains how the different types fit into a state's policy to intervene in the affairs of another state.

3 The Evolution of Proxy War Since 1945
chapter abstract

In this chapter, the book explains how war has a way of confounding policy. Barriers influence a state's decision to intervene in the affairs of another state, but the nature and interpretation of those barriers change as the structure of the world order changes. The need for proxy intervention remains, but the conditions under which it operates have changed. Looking at the changes from a systemic perspective offers some interesting insights. To this end, this chapter asks three questions: (1) How does the order of the international system influence the use of proxy war? (2) How does a state's position in that order influence its use of proxy war? (3) How does a state's perception of the barriers affect the choice to engage in proxy war? Looking at these questions leads to a model that describes, and potentially predicts, the conditions under which a state will resort to proxy war.

This chapter presents a theory of how to conduct proxy war in a way that maximizes such a policy's utility and efficacy. Regardless of how well the proxy appears to fit the need, the reliance on another to pursue interests and objectives means that the intervening state must prepare for the additional costs and challenges associated with working through a third party. This chapter explores how certain conditions and methods lead to maximizing a proxy's utility and efficacy. Utility refers to the idea that a proxy can do what is needed—that it can perform the tasks necessary to carry out the intervention. Efficacy describes the proxy's ability to enable the intervening state to accomplish its desired objectives. Therefore, efficacy represents the long-term perspective.

This chapter presents a case study for how the United States failed to persuade the Royal Lao Government to commit to counterinsurgency efforts against the communist Pathet Lao and therefore cultivated an indigenous proxy in the Hmong. International conditions did not support U.S. involvement at any level, yet the United States gained significant benefits from the arrangement with comparatively small costs. This case represents one of the rare instances when an intervening state supports a proxy that is essentially unaffiliated with the sitting government. Although the Hmong had already begun to band together to fight the North Vietnamese and Pathet Lao, it was not until the United States got involved that the Hmong became an influential factor in the Laotian conflict.

This chapter presents a case study for how South Africa used UNITA as a proxy to intervene in the tense civil war in Angola to protect itself from communist influence. Pretoria wanted to prevent the African National Congress from taking over South Africa by force and to minimize Soviet influence in the region. UNITA received relatively overt support, operated with a high degree of autonomy, and had highly divergent objectives. Although the international community rhetorically opposed South Africa's involvement in Angola, the actions of the United States and Western Europe reflected a more tacit approval. Domestically, South Africa's public was reluctantly supportive but only on the condition that the costs remain low. Considering that most states had already rhetorically condemned Pretoria's government and its foreign policy in southern Africa, it is interesting that states failed to raise the international costs of South Africa's indirect intervention in Angola.

This chapter presents a case study for how India initially supported the LTTE (Liberation Tigers of Tamil Eelam) covertly to protect ethnic Tamils in Sri Lanka and then later had to overtly intervene to stop LTTE's operations during efforts to broker peace. For the duration of the conflict, India's support remained covert and plausibly deniable. Inside Sri Lanka, the character of the conflict was almost exclusively ethnic and involved the government in Colombo trying to prevent the emergence of an independent Tamil state. Internationally, the United States, the Soviet Union, and most other global powers, for the most part, remained sidelined. Domestically, India's government had to balance its foreign policy with concerns about its sympathetic Tamil population and the threat of several different secessionist movements inside its own borders. The India-LTTE case reflects history's most costly proxy war policy.

This chapter summarizes the book's findings and concludes that the twenty-first century and its associated advances in information sharing, communication, and social media will not likely create a revolutionary change in the utility and efficacy of proxy war. In the cases of Russia, China, and the United States, intrastate conflicts on the periphery will once again become proxy war hotbeds. Indirect intervention will most likely follow a policy of donating assistance, meddling, or feeding the chaos in states near their competitors. Although a multipolar world order means that there are more states with global interests, the heightened competition in key regions mean that gains can be made in areas that are less strategic. Unfortunately, this probably means that Africa will experience an increase in civil wars propagated and supported by third-party intervention.