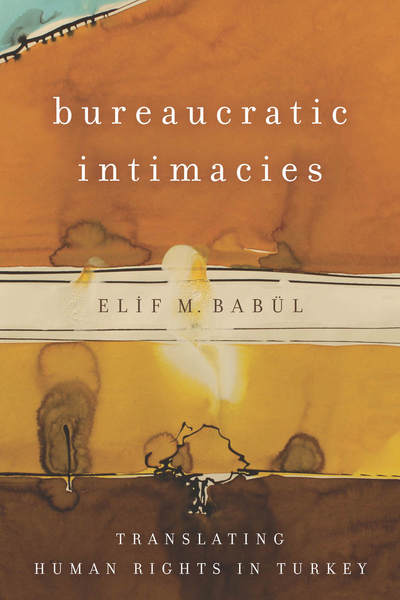 Contents
Excerpt from the Introduction
Setting the Stage

The Bureaucratic Field in Turkey

The cool and dim interior of the Ankara courthouse stood in contrast to the bright, sunny day outside. It was early June 2008. I placed my purse on the moving band as the security guard asked whether I was a lawyer in training. I answered “No.” The sign on the x-ray machine read “Judges, Prosecutors, and Attorneys Exempt.” I told the guard who was examining my voice recorder that I was there to interview Judge Neriman1 from the children’s court and that I had an appointment. Stepping into the building, I found the courthouse surprisingly quiet. The signs on the grey walls directed me to the third floor. I looked for the elevator but ended up taking the stairs when I saw the posted warning: “Authorized Personnel Only.” Climbing up the stairs, I found a small courtroom where the court was in session. I peeked in through the open door and moved silently to take a seat in the back. Judge Neriman saw me entering and gestured with her hand, pointing to the front seats that are usually reserved for the interns. I obeyed her and sat right by the bench.

The defendant was a boy in his late teens with stylish dark hair, fashionably ripped dark jeans, a white button-up shirt, and polished pointy shoes. He was standing in the front to the right, on the other side of the bench from where I was seated. I gathered from the hearing that he worked as an apprentice in a male hair salon and that he was accused of stealing a cell phone from his boss. His attorney, a soft-spoken young woman, explained that the defendant came from the provinces not long ago, without much money or acquaintances. When he stole the cell phone, his salary was past due. He had asked timidly to be paid a couple of times, but his boss delayed it, saying he had more urgent debts to close. The defendant then took the phone and sold it out of despair. Judge Neriman interrupted the lawyer and finished the story herself. Looking over her spectacles and speaking directly to the boy, she said, “But then you confessed to your boss before he found out, after you got paid. And you apologized, right?” The defendant bowed his head to confirm. “I see that you still work at the same place,” Judge Neriman continued, “and I’m sure that you’ve learned your lesson, and you will never repeat this mistake.” The defendant complied again. Judge Neriman then turned to the court recorder directly seated under her, and she started dictating. She summarized the case and the attorney’s defense, adding references to particular articles from the Child Protection Law. Next, she turned to the attorney and asked: “You will probably demand probation, right?” The attorney agreed eagerly. Judge Neriman finished dictating her verdict and she adjourned the court for lunch break.

Once the courtroom was emptied, Judge Neriman came to sit with me, and I interviewed her about the juvenile justice training program she participated in. She had a firm yet pleasant demeanor, which elicited both trust and respect. Her dark blue two-piece dress had black trim around the collar and the cuffs. With carefully coiffed short brown hair and light makeup, she looked elegant and serious. In her early fifties, Neriman has been on the bench for over twenty-five years. She was appointed to the children’s court when children’s courts were established in 2005. She has been involved in organizational meetings, trainings, and workshops since 2006.

When I asked her to comment on the latest training in which we both participated, she said that her experience was mostly positive. Although she particularly praised the multiday, camplike training setting that housed the participants, trainers, and organizers in a hotel outside the city for four days, she complained that the format added to her already-heavy workload. “Before they design such programs, they need to come and see our work environment,” she said. “See, the colleagues substituting for me did not even issue the simplest verdicts. They all postponed cases. Now, instead of thirty files, I have forty that I need to get through this week. This demands quite a sacrifice from us.”

Sacrifice and care were in fact recurrent themes in Judge Neriman’s comments. “I hold trials at least three–four days a week,” she said. “I need to review the files before the trial, I need to write down my verdicts. When am I supposed to do all these things? If I don’t come to the courthouse on Saturday or Sunday, I cannot catch up. I also have health problems. I had to delay attending to my health because of all this.” Judge Neriman talked about both her profession and her commitment to juvenile justice in terms of a selfless endeavor that she carried out despite limited resources and hardship. During the interview, she pointed to different parts of the courtroom, to wrapped doorknobs and felted chairs, which she had done personally to make sure that the furniture would not destroy the painted wall or the floor polish. She recounted that upon her initial appointment, she did not even have a designated courtroom. Through her own personal initiative, she transformed a file storage space into a small courtroom, decorating it with potted plants she had brought from her own house to make it less grim and more child-friendly. To further emphasize how she performed her job under inadequate circumstances, she narrated how she often lent her office to court social workers who needed to meet with children privately to prepare social investigation reports.

“I always convey to my personnel how much I appreciate them,” Judge Neriman maintained. “I sometimes sit down and eat with them. We share. I don’t know if you noticed, but none of them are badly behaved. They’re not spoiled or impolite. They work relentlessly because I tell them how important their work is for what I do. Even if I’m the brain, I tell them that they’re like my hands and arms.” Her attitude towards her staff at times mirrored her approach towards children in the justice system, especially when she talked about her current bailiff—a young man raised in an orphanage who was hired through affirmative action: “The first day he arrived, I told Mehmet what he had to pay attention to, what I expected from him, how he should behave, and I had him watch me run a trial with an experienced bailiff . . . After the trial, I sat him down and told him that he was forbidden to wear heavy scents like hacıyağı [an oil-based heavy perfume that is made from attar of roses and is associated with hajis and/or worn by lower class, conservative people]—because I know that onlar (they—his kind) fancy it. I told him that he should not wear white socks. I told him all of this because I thought since he didn’t grow up with parents, he might be lacking some things that are passed on through the family. He is a very attractive boy. He buys whatever he fancies. One day, I arrived at the courthouse and found him smelling very strongly of hacıyağı. He said, ‘I wasn’t thinking. My friends wore it, so I tried it as well.’ I gave him the afternoon off so that he could go shower. I told him not to repeat it again.”

Neriman emphasized the notion of leadership multiple times during our conversation. Her one criticism about the training program was that it did not highlight enough that judges are actually the head of the system. Although she enjoyed going through training with various government workers who work in different parts of the juvenile justice system, she nevertheless expected the trainers to be more explicit about who leads the system: “Now, physicians in particular have difficulty with this . . . They think that they studied for six years and when they start working they come under the authority of the governor, who only has a four-year education. But this is the law. That governor is there as an administrator, you are here as a staff member who is responsible for health care services. Management is different, health care, being a doctor is different. They have to accept this from the very beginning. Police, gendarme, social worker—they all need to accept that they are staff members within the judiciary. You need to see it from a distance. At the end of the day, it is the judge who issues the final verdict. The prosecutors only open cases; they make demands on the court. But the judges are not like that; they make decisions . . . Everyone has a set role and needs to know what his or her role is. Social worker, your job is to prepare this report. Doctors, likewise, prepare their reports. They don’t interfere with how the judges will evaluate them. The judges may find the reports right or wrong, but they are the ones who will eventually decide . . . There has to be a chief. And the chiefs in this system are the judges. You must first and foremost accept their presence and authority. This might have been emphasized more in the training.”

After the interview, Judge Neriman offered to take me to lunch. I gratefully accepted. “I can also show you around the courtroom on our way out,” she suggested. We first stopped by her office. As she opened the door she warned me that a social worker was inside, interviewing a child. We said a quick hello to the young woman who was sitting with a notepad in her lap across from a boy in his early teens on two couches facing each other. Judge Neriman then took me to the court secretariat, where the staff was busily working. They all stopped to greet us. “Hello friends!” (Merhaba arkadaşlar!) Judge Neriman exclaimed. She then turned to me and repeated how the secretarial staff was essential for the functioning of the court. She introduced me as a university student preparing a thesis and she said that there are many students she helped out in the past. “If you need to see any case files, let me know,” she said. “I can tell the secretariat to release them to you. Of course they erase any sensitive information—names, addresses. I allow many students like you to study my case files.” I thanked her and the staff in advance. On our way to the cafeteria, Judge Neriman answered my question about how she decided to become a judge. “I actually always wanted to be a teacher,” she said, “but life took its course, and I found myself here.”

What I experienced firsthand in the courtroom that morning was enactments of deeply hierarchical relations that condition the worlds of government workers in Turkey. Those enactments were sometimes subtle, other times overt. One could read hierarchies through the spatial arrangements and enactments of deference and authority, as well as the organizational structure of government offices. Along with its hierarchical composition, another significant characteristic of the governmental realm in Turkey was its pedagogical makeup. A tutelary disposition defined the ways in which higher-ranking government workers related to those in the lower ranks and the ways in which most government workers related to citizens. Bureaucratic reform projects such as human rights training programs sought to undo those hierarchies and pedagogical relations in order to transform bureaucracy into a more egalitarian and collaborative field.

1. Here and throughout the book, I use pseudonyms for all the informants I worked with.