STANFORD
UNIVERSITY PRESS
Dangerous Leaders
How and Why Lawyers Must Be Taught to Lead
Anthony C. Thompson 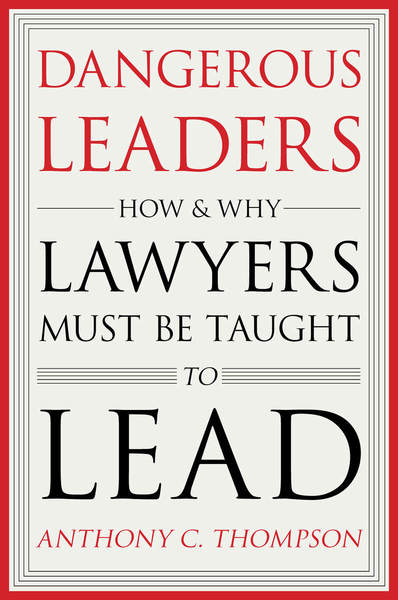 Dangerous Leaders
How and Why Lawyers Must Be Taught to Lead
Anthony C. Thompson

An increasingly uncertain and globalized world demands that lawyers be leaders, yet legal education has failed to prepare lawyers for that responsibility. Consequently, lawyers have made decisions that corrupt organizations and structures, ultimately making them "dangerous leaders." The chapter introduces a new framework called intersectional leadership that will allow leaders to navigate the current complex and unpredictable society. This model has five key components: (1) develop and rely on a team that brings dissimilar experiences to the leader; (2) learn from unlikely sources; (3) collaborate for the greater good, not the leader's incentives; (4) be suspicious of consensus; and (5) have moral courage.

1 Piloting the Boat by Looking at the Wake: Leadership Challenges for the Legal Profession
chapter abstract

The chapter explores how existing theories of leadership overlap and differ from an intersectional leadership model. The intersectional model is distinct in that it does not assume leadership as hierarchical; rather, it recognizes that leaders should be collaborative and situated at nodes of various networks. This chapter details how each of the five dimensions of intersectional leadership enables the lawyer-leader to assume a broader enterprise function and to expand beyond technical skills taught in law school. It posits that in order for a lawyer to advise his or her client effectively, he or she must rely on truly diverse, and at times competing, perspectives not limited to his or her technical expertise. The chapter concludes by examining how the 2008 financial crisis necessitates a more creative and proactive model of leadership to deal with the demands of a volatile, uncertain, complex, and ambiguous global climate.

2 Is There an Echo in Here? Diversity, Tension, and Accountability in the Leadership Team
chapter abstract

This chapter uses two case studies to illustrate how failure to construct diverse leadership teams creates blind spots in judgment that can lead to corrupt practices. The first details how Governor Chris Christie created a culture of insularity within his administration and enabled his officials to retaliate against a town that refused to support Christie's bid for reelection. The second case explains how Assistant U.S. Attorney Jim Letten turned a blind eye to his top trusted officials' misconduct and compromised his investigation and ultimately the administration of justice. The chapter identifies takeaways regarding the risks of insularity and outlines concrete steps that law schools and educators can take to foster more diverse and critical lawyer-leadership teams.

3 "A Fish Rots from the Head Down": Leadership Failures Behind Closed Doors
chapter abstract

This chapter argues that lawyer-leaders must develop practices to ensure integrity in conduct carried out behind closed doors, showing the risks through two examples from the criminal justice system. In each example, prosecutors, although mandated to serve as ministers of justice, permitted their own biases to pollute the environment in which they led—and their behavior cast a wide shadow. Others within an organization look to the leader for guidance on behavior and values; if ugly behavior occurs at the top, it will likely spread across the ranks. When the lawyer-leader sinks to base behavior, this not only drags others down to that level but actually threatens the integrity of the legal system at large. The chapter details several cases in which evidence of racial motivations for striking jurors was used to successfully challenge capital punishment, highlighting the importance of continual integrity and transparency.

4 Getting the Balance Right: Personal Ambition vs. the Greater Good
chapter abstract

This chapter calls for a framework to help lawyer-leaders make decisions when personal interests and greater goals are in tension. It argues that ethics are foundational to a good legal education, particularly given how many lawyers seek elected office. The chapter outlines two instances where public decisions collided with personal ambition. First, Justice French of the Ohio Supreme Court was running for reelection when she ruled in favor of imposing the death sentence without acknowledging her political ambitions of maintaining a conservative court. Second, when then-governor Bill Clinton was running for president and was criticized for being soft on crime, he refused to grant clemency to a man on death row with a severe mental disability. The chapter concludes that lawyer-leaders must not only be transparent when the greater good conflicts with their personal interests but also must subordinate personal goals in service of the public good.

5 If You See Something, Say Something: Leadership Responsibility and Systemic Failures
chapter abstract

This chapter explores the role of lawyer-leaders who may not have an explicit role to monitor breaches of public trust but witness ethically ambiguous conduct. By way of example, the chapter details how Enron's outside counsel failed to take their concerns to Enron's executives about the shell companies that ultimately concealed Enron's fraud. The chapter also details how the obvious judicial misconduct of Judge Ciavarella in juvenile court went unreported for six years, despite many prosecutors, public defenders, court officers, and police witnessing his tactics to send kids to his private detention center. The chapter concludes by arguing that lawyer-leaders must be morally attuned to the entire ecosystem within which they operate and sustain difficult conversations to ensure the integrity of the enterprise.

This chapter explores the challenges that emerge when conflicts are essentially baked into the lawyer's role, and the dangers that result when lawyer-leaders fail to balance their competing demands. Focusing on the role of general counsel, this chapter examines how lawyers have historically served two principal functions: guiding the business through its strategic priorities and ensuring compliance with the law at all times. As the general counsel role has evolved, the obligations have become increasingly multifaceted and involve greater complexity and tension than previously. The author uses the examples of two specific general counsels, from Hewlett-Packard and Wells Fargo, whose choices to favor one role over competing roles and to ignore the position's broad mandate damaged the interests they were assigned to protect. The chapter concludes by arguing that lawyers must hold multiple perspectives simultaneously or risk threatening the integrity of the system that they safeguard.

7 What Got You Here Won't Get You There: Pulling Together the Leadership Lessons for Lawyers
chapter abstract

This chapter debunks the view that lawyers need only rely on their technical expertise to lead. Instead, the chapter argues that lawyer-leaders will need to operate as intersectional leaders embracing the five key leadership attributes that are foundational to the intersectional lawyer-leader. This chapter pulls together the leadership lessons gleaned from the examples in the previous chapters to argue that more is required of today's lawyer-leader than business as usual. The author argues that the intersectional leader must be able to connect people and networks in the service of a common good and shared goal. The chapter also explains that effective lawyer-leaders will need to tap into and hone a set of key skills and attributes that enable them to be emotionally intelligent, cognitively competent, culturally competent, and broadly connected.

This chapter argues that exposing law students to intersectional leadership education is an important first step toward reducing the danger posed by ill-prepared lawyer-leaders. The chapter contends that if law schools seriously intend to prepare the next generation of leaders, they must recognize and embrace the duty to start this process of learning by exposing law students to leadership concepts and lessons through their pedagogy and substantive discussions. Similarly, practicing lawyers who currently function as leaders or have ambitions to such roles will also need to train for this new form of leadership. The chapter urges law schools to provide leadership learning opportunities for students in dedicated courses as well as traditional courses. The chapter suggests that intersectional leadership is a place to start.

Considering the 2016 U.S. presidential election and the Brexit movement in the United Kingdom, and the particular populist leaders they have ushered in, this chapter challenges the notion that appeals to nativism, xenophobia, and division are examples of genuine leadership. The author insists that there are three fundamental components to effective leadership. First, the leader must unite people who may have previously disagreed with the leader. Second, a leader must inspire those whom he or she leads, meaning the entire enterprise, its stakeholders, and its clients. Finally, once the leader has united the organization, enterprise, or country, he or she must move it toward a shared vision of a greater good. Given the decentralized nature of governing and complexity of issues the next generation of lawyer-leaders will face, law schools must teach them intersectional leadership to prepare them for the world that is unfolding.