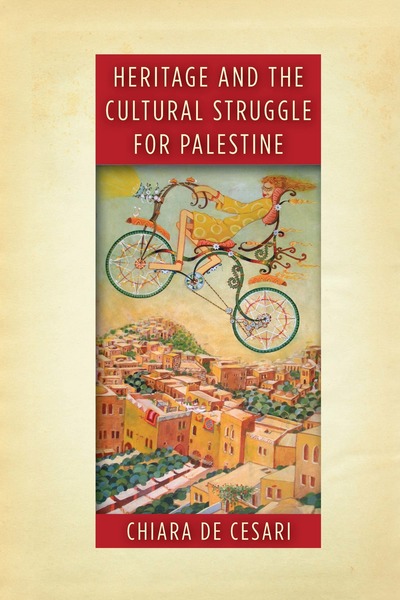 Heritage and the Cultural Struggle for Palestine
Chiara De Cesari

Contents
Excerpt from Introduction
Contents and Abstracts
Introduction: The Stakes of Heritage and the Politics of Culture
chapter abstract

The introduction opens with the story of the Palestinian heritage organization rehabilitating the occupied and colonized Old City of Hebron. This story encapsulates many facets of the book, particularly the relationship between heritage making and Palestinians laying claims to sovereignty (that is, resisting colonization) and instantiating provisional, improvised, resourceful forms of government. It lays out the key argument of the book that Palestinian heritage has transformed from a practice of resistance into a mode of "governing" the Palestinian landscape and society that is deeply connected to transnational regimes of development and a precarious if resourceful process of state building in the absence of a sovereign state. Finally, the introduction outlines the book's key theoretical concerns: how heritage functions in mutating colonial formations and as a form of anticolonial governmentality beyond the nation-state as well as the work of heritage as expanding transnational framework of practices and meanings.

Chapter 1 examines the history of heritage preservation in Palestine in the 20th century. It begins with the work of Palestinian orientalists and ethnographers under the British Mandate in the 1920s and 1930s, to analyze how they rework colonial science in the spirit of a nascent Palestinian cultural nationalism. It then focuses on the Folklore Movement of the 1970s and 1980s and particularly its connection to the national liberation movement and the women's movement as well as its practice of anticolonial resistance and activist preservation in the occupied territories.

Chapter 2 discusses the project of historic conservation and urban revitalization in the Old City of Hebron, which remained under Israeli control after the Oslo Accords because of the presence of several Jewish settlements. The chapter explores informal governmentalities through heritage. Countering the settlers' takeover of the Old City, the Hebron Rehabilitation Committee has restored and repopulated a large part of the city's dilapidated central quarters. But in order to sustain livelihoods in difficult conditions, it has begun to work on socioeconomic development through a broad set of interventions, adopting the language and practices of international development. Over the years, with the Palestinian Authority not being able to work in the occupied Old City, the Hebron Rehabilitation Committee has come to function as a hybrid institution of local government.

Chapter 3 examines the state-building role of heritage NGOs and the complex relationship between these organizations and the heritage body of the Palestinian Authority (PA). It argues that the Palestinian heritage movement or "heritage by NGOs" helps create and sustain not only icons and rituals of cultural nationalism but also a national infrastructure of heritage preservation and a set of national institutions alternative to those of the PA, like inventories, heritage units, master plans, and laws. In addition to preserving Palestinian identity and reclaiming Palestinian lands, West Bank organizations wish to ameliorate the living conditions of historic districts' residents and villagers and so intervene in the spaces and habits of their everyday life. In so doing—and in the context of the PA's structural weakness—they experiment with a range of modes of planning and governance, and enact a form of resourceful statecraft from the margins of the state.

Placing heritage initiatives in the context of a broader cultural revival in the West Bank, Chapter 4 discusses the peculiar history of post-Oslo museums; if the Palestinian Authority has failed to create a major national museum—as a key institution of national representation—also due to a fundamental lack of objects and museum collections, Palestinian artists and cultural producers have instead experimented with different museum formats, creating virtual museums and nomadic museums in exile, thus producing creative national institutions in transnational spaces. These alternative museums walk a tightrope between establishing authority (as institutionality, as rules and regulations, as an authoritative museum voice) and challenging such authority to promote radical, democratic practices.

The conclusion opens with an examination of the Islamic Movement and Palestinian activist preservation in Israel targeting the remains of the Palestinian villages depopulated in 1948 when the Israeli state was established. It compares this heritage work with the work of Palestinian NGOs in the West Bank, which have moved toward development and institution building, or a kind of activist statehood. The conclusion then makes an argument for the relevance of new forms of cultural governmentality and heritage-led development well beyond Palestine.