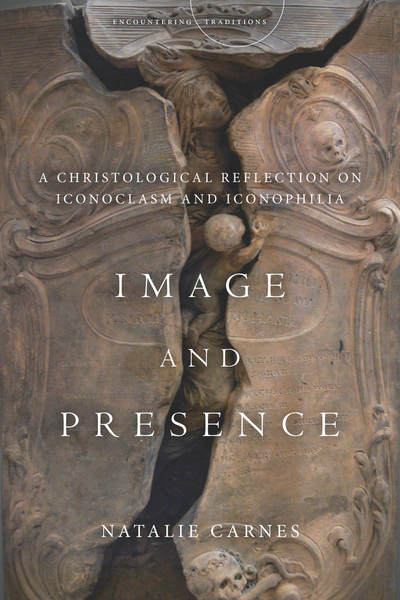 Iconoclasm has become a way of dividing the world into "us" and "them:" Protestant versus Catholic, Modern Westerner versus unassimilated Muslim, the properly critical versus the irrationally zealous. But what if image breakers cannot be so easily distinguished from image lovers? This section argues that certain forms of iconoclasm are intrinsic to iconophilia because negation is central to what an image is. Images negate themselves to give what they are not; by negation, they mediate to the viewer a presence beyond themselves. This iconoclastic structure of imaging is surpassingly revealed, this section argues, in Christ, the Image of the invisible God, whose way of giving divine presence through forms of image-breaking insinuates the implausibility of pitting "us" against "them" in an image war.

This chapter contrasts literal eros (desire for nourishment, sex, or some other material good) with literalized eros (desire that attempts to foreclose any non-literal meanings) to diagnose how modern life with images often goes awry by either denying literal desire, as in certain art institutions, or literalizing it, as in pornography and advertising. The painting tradition of Maria lactans, the breastfeeding Mary, dramatizes Christ's alternative relation to desire. Suckling at the bared breast of Mary, the Christ-babe of these images summons and negates—without eradicating—a literal desire that then becomes more than literal. Literal eros is thus not replaced but rather opened, deepened to become the divine eros that bears the arriving presence of Christ to the viewer. In this way, it parallels the movement of Christ himself, who binds together the economies of human and divine desiring.

2 Came Down from Heaven and Was Made Human: Abiding Presence
chapter abstract

God who in Christ abides with creatures as a creature becomes visible without ceasing to be invisible, thus negating the visible to open it up to the invisible. In this way, Christ the Image refuses the totalization or closure of the visible. This chapter elaborates these claims by tracing the historical and conceptual links between Christ, humans, and images. Drawing on Byzantine debates and the literature of Flannery O'Connor and Walker Percy, it argues that image, Christ, and humans share a logic of amphibiousness. Fidelity to the dual natures of these amphibians requires certain forms of iconoclasm—particularly, apophaticism and confession, which recuperate idols by making them proper images, faithful to Christ the Image, who renders God visible without reducing God to that visibility, who becomes flesh without being exhausted by flesh, who abides in the world while transcending it.

On the cross, Christ becomes an image who rives and is riven, who breaks and is broken. At one level, the cross is humanity's supreme iconoclastic act, for by it, humans mutilate the Image of God. And yet, in such breaking, God is made uniquely manifest, for Christ reveals God to be the divine love that retains its character as perfect love even under the most violent pressure. In this way, the cross is also, on the one hand, God's iconoclastic act—for God breaks the power of sin and violence—and on the other, an image of that iconoclastic love. Through analysis of Reformation iconoclasm against crosses, poetry about the cross, and cruciformity in late medieval saints' writings, this chapter argues that the negation of negation on the cross invites a wide iconophilia sustained by a certain narrow iconoclasm that participates in the breaking of brokenness.

The Image who rose again bears a new, deepened form of abiding presence in which visibility is once again negated—this time to express not just the uncircumscribability of the divine (as in Chapter 2) but also the uncircumscribability of the visible itself. Three types of imaging—icons, the least of these, and acheiropoieta—witness to the resurrection as an imageless, fecund moment that negates visibility in such a way that it also births new forms of images. The resurrection both invites iconoclasm and generates new images of transfigured visibility. These are images of and for mercy. To receive these images rightly, the beholder must also be transfigured; she must ascend to the invisible yet visible God through a descent in love to the visible yet invisible neighbor.

The Image who will come again in glory negates all desire so that such desire might become the infinite desire of Christ—and so that all people might become images of Christ's arriving glory. Christ arrives, then, in a desire that refuses idolatry, a desire that is opened infinitely up to encounter, ever anew, its infinite object. Christ is disclosed as the Image that consummates what all images, qua images, seek. Desisting idolatry requires discerning iconoclasms of fidelity and iconoclasms of temptation, which are illumined through the two major families of iconoclasm in modernity: the Baconian and the Wittgensteinian. Taking as its focal point Nicolas Poussin's 1633–34 painting The Adoration of the Golden Calf, this chapter engages W.J.T. Mitchell, Bruno Latour, Jean-Luc Marion, and Gregory of Nyssa to articulate what kind of life one might have with images and iconoclasms while waiting for divinity to arrive.

Conclusion: The Image of the Invisible God
chapter abstract

While the politics of modern religious identity may equate Catholics with presence and Protestants with absence, this concluding chapter points to the ways presence and absence exist in a reciprocal relationship with one another. The Protestant who breaks images does so in part to assert the universal availability of the divine: God cannot be confined to this image or that statue. Similarly, the Catholic who lights candles before a statue and the Orthodox who kisses an icon do so to direct attention elsewhere, to what cannot be seen and touched. Iconoclasm needs iconophilia lest it degenerate into iconoclasms of temptation and despair; iconophilia and images need iconoclasm lest they become idolatry. This chapter argues that the paradoxical togetherness of iconoclasm and iconophilia, presence and absence, is the iconoclasm of the incarnation writ large: that God can become a visible human without ceasing to be the invisible divine.