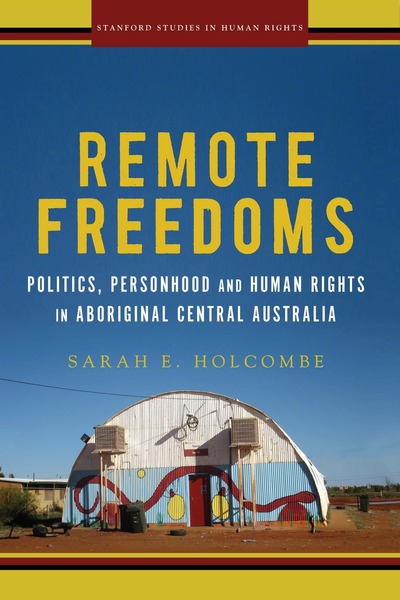 Contents
Excerpt from the Introduction
Foreword

Contemplating human rights in the abstract is a luxury that only the most isolated occupants of the ivory tower can afford . . . moral or cultural relativism does not need to underlie the view that that the understandings of human rights are particular.

This book is an exploration of the diverse work of human rights in several remote Aboriginal communities in central Australia. It attempts to make visible the implicit and the tacit and to start a conversation about the possibilities and the limitations of human rights to address the multiple and intersecting forms of social vulnerability that many Aboriginal people in remote central Australia experience. To do this I have worked with Anangu (as Pintupi-Luritja speakers refer to themselves) in the communities of Papunya and Mount Liebig and some members of the diaspora from these places in Alice Springs. Although this book is at once particular to central Australia and to these remote communities, it is a narrative with global reach. Human rights language, discourse, and institutions have become fundamental to the work of states and state sovereignty, most notably through the United Nations. Human rights underpin the tacit contract of modern citizenship in democratic liberal states, and they are the benchmark, though arguably largely symbolic, by which states are measured as “global citizens.”

For Anangu this tacit contract of citizenship is increasingly being made explicit through the regulatory dimensions of rights and the acknowledged public goods of representation, accountability, and transparency. These liberal practices are framed through the responsibilization discourse, the work of which can increasingly be found through an extensive raft of Indigenous affairs policies and, likewise, increasingly through Indigenous nongovernmental organizations (NGOs). This regulatory dimension of human rights is now the dominant discourse in the channeling of neoliberal forms of citizenship. The growing body of critical scholarship on the entailments of human rights, as that “which we cannot not want” (Spivak, cited in Brown 2000: 230) and as the ideological gloss for an emerging empire through the concealment of powerful interests (Douzinas 2007; Englund 2006), is a recognition of how encompassing the discourse has become.

On the other hand, for marginal and subordinated groups globally, the language of human rights is the language of progressive politics and social justice, largely replacing the earlier discourses of revolution and socialism. As Hodgson explains:

Despite the existence of alternative modes of understanding, defining, and promoting justice, “human rights” have become the dominant model for making positive (for free speech for example) and negative (such as against bodily violence) claims against individuals and collectivities (primarily states) in the contemporary world. (2011: 4)

One only has to watch a film such as 12 Years a Slave1 or to recall the horrors of the Holocaust from the Second World War to be reminded why we require universal standards of equality and human dignity and why the United Nations system of human rights has been one of the great moral achievements of the twentieth century (Kymlicka 2007). It is the hope inspired by this emancipatory discourse deployed to fight oppression and to act as morally generative that invigorates movements for social justice (Speed 2006). The tensions between the bounded and domesticating form of human rights, and its enfranchising and emancipatory possibilities, are ever present within this book.

This book is energized by Goodale’s statement that “ethnography of human rights practices [are a] fertile source of new ideas about the complex relationships between normativity, agency, and social and political intentionality” (2012: 468). It seems to me that new ideas are needed to reconsider the conundrum of structural and intersectional “disadvantage” (to borrow a policy term) that has come to characterize the Anangu world. Arendt’s now iconic phrase, “the right to have rights” or the right to belong to a sociopolitical community that can guarantee these rights, unfolds in central Australia within the nexus of the state and the local Aboriginal community and family. In this context, it is telling to recast the issue in terms of “why Anangu don’t seem to ‘claim’ their rights.”

Thus, this book explores the tensions and contradictions between the possibilities that human rights offers within its parameters and limitations as it identifies intersections and ruptures from the norm. As Santos has said: “The other possible world may be many things, but never a world with no alternatives” (Santos 2006: 12).

So What Exactly Are Human Rights?

A number of the core human rights principles can be traced back to the Magna Carta, which established some fundamental principles, including the distinction between church and state, the rights of all free citizens to own and inherit property, the principles of due process and equality before the law, and so on. This charter was a turning point in the historical development of modern democracy and the freedoms of individuals. In 2015, an exhibition commemorating the 800th anniversary of the Magna Carta was held at the Old Parliament House in Canberra. The principles embodied in this charter developed in a concerted way during the Enlightenment of eighteenth-century Europe and coalesced in the French Declaration of the Rights of Man and Citizen of 1789 (see Hunt 2007). The philosopher John Locke is widely considered as one of the founders of contemporary rights discourse. Locke’s doctrine of natural rights that are essentially rights to liberty is regarded as the first firm statement of the ideas of Western liberalism and a symptom of the growing individualism of Anglo culture (Raphael 1965). Locke’s three principle “natural rights” are the rights to life, liberty, and property. Such rights are today associated with civil and political rights, or “first-generation rights.”

The French Declaration incarnated the promise of universal human rights (per Hunt 2007: 17), which then consolidated with the emergence of the United Nations (UN) after the Second World War. After the horror of Nazi Germany’s extermination of millions of Jews, Sinti and Romani (gypsies), homosexuals, and persons with disabilities, governments committed themselves to establishing the United Nations with the primary goal of bolstering international peace and preventing conflict. Eleanor Roosevelt, the widow of US President Franklin D. Roosevelt, led the development of the Universal Declaration of Human Rights (UDHR), which was adopted by the then fifty-six members of the United Nations in 1948. So-called second-generation rights—economic, social, and cultural rights—were articulated during the development of the UDHR and so are more recent than civil and political rights. Both sets of rights have their own conventions and, at the time the Universal Declaration of Human Rights was developed, these two tiers of rights were reflective of Cold War politics. In 1993, at the end of the Cold War, there was an attempt to reconcile these two opposing ideologies and the qualitative division between these two conventions with the Vienna Declaration: “All human rights are universal, indivisible and interdependent and interrelated.”

The Australian government is a party to the International Bill of Rights (which includes the Convention on Civil and Political Rights and the Convention on Economic, Social and Cultural Rights). Yet, there is little systematic relationship between the rights articulated within the International Bill of Rights and law in Australia (see also Byrnes, Charlesworth, and McKinnon 2009). Nonetheless, these normative concepts do work on a range of levels: as discursive political tools, as tacit elements of contemporary mainstream “culture,” as a set of principles to which various governing bodies abide, as mere rhetoric, and as a moniker for modernity and globalization. Part of the reason this discourse is tacit, and in certain contexts not legitimate, is that Australia is without a national bill or charter of rights. Yet, the discursive effects of human rights are real as they structure the relations of power between Aboriginal people and the state, as revealed through interventionist sociolegal policies.

Many of the core principles of human rights are intrinsically permissive as they alternately speak to what it means to be human—consciousness, mortality, and family—and what it means to be a modern political person. The discourse of rights, as ideology and as politics, permeates all aspects of modern life so that they are almost common sense. In the modern nation state the concepts of rights are part and parcel of everyday speech and everyday institutions. Because we invoke these concepts frequently, we rarely think about their meaning.

It is this commonsense element that scholars such as Arendt (2003) and, more recently, Gundogdu (2012) have termed the aporias of rights. This Socratic mode of thinking starts with ordinary concepts of political life, in this case human rights, and calls into question their conventional understandings, opening up possibilities of thinking them anew (Gundogdu 2012: 5). Notwithstanding the aspirational intent of the Universal Declaration of Human Rights as it espouses the “inherent dignity, the equal and inalienable rights of all members of the human family,” there is, however, nothing intrinsic, natural, or inherent in humans that leads to a conference of “rights.” They are fundamentally sociopolitical constructs.