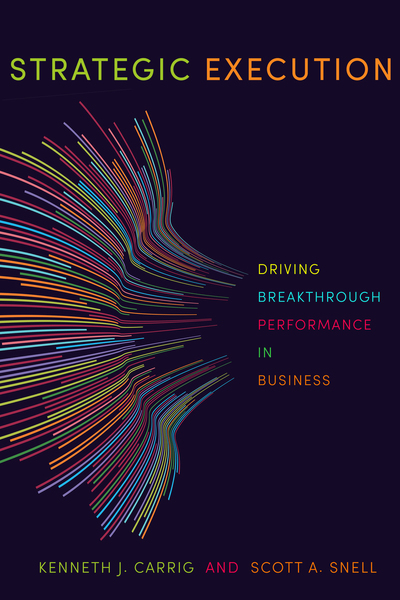 EVERY GOOD BOOK begins with a compelling premise. Here’s ours: The greatest challenge of CEOs and top management teams is helping their organizations execute better. This challenge either supersedes or is instrumental to most any other issue these executive teams face, whether it’s achieving better financial performance, market growth, sustainability, innovation, or leading through disruption. To achieve any of those outcomes, we know they first need to crack the code on execution.

It’s not as easy as it might sound. As we began discussing the issues with a broad group of colleagues and business leaders, their interest in the topic was overwhelming. They were searching for answers. And what surprised us is that they weren’t sure if they were framing the question the right way. So we’ve been on a quest to better understand the challenge of execution, and find the best ways to address it.

Here’s how it all began: A few years ago, during a strategy review process at SunTrust, our analysis of the banking financial services industry revealed something interesting. Strategy alone did not differentiate high- from low-performing firms. Instead, the true differentiator between winners and losers turned out to be how well the strategy was executed. The data on this were pretty compelling, and the fact is we weren’t doing all that we should.

Although the financial services industry has always been competitive, the financial crisis of 2008 and the years of the Great Recession placed unprecedented pressure on traditional players, including SunTrust. A confluence of legislative, regulatory, economic, and technological changes—as well as continued consolidation—drove mounting challenges to profitable growth. During the crisis, as revenues declined and the costs of meeting regulatory requirements rose, many banks experienced a spike in their efficiency ratios (a critical measure of performance defined as noninterest costs divided by gross revenue). A high ratio is a bad thing, and SunTrust’s was among the worst in the industry.

Despite improvements in subsequent years, SunTrust still lagged behind other competitors. The bank’s regional scale alone was not enough to explain its disadvantage. Compared to competitors of similar revenue and headcount, SunTrust fell in the lowest quartile in efficiency. The bank’s strategy wasn’t to blame either. If anything, SunTrust had some strategic advantages in terms of its reputation and the markets it served. That bank simply wasn’t as productive as its peers. And wasn’t executing like it should.

Bill Rogers became CEO in 2011, and immediately brought the leadership team together in a three-day offsite to undertake a comprehensive review of the bank to determine the best path forward for SunTrust. The team used the time—away from the daily whirlwind—to do a frank self-evaluation and thorough investigation of the underlying causes of the performance gap. At first, the temptation was to rebalance the strategy and business mix—after all, the financial crisis exposed some deep concerns in industry fundamentals.

But the team ultimately had an epiphany of sorts, and we learned some important lessons in the process that changed the way SunTrust approached strategic reviews from then on. SunTrust needed to pick a place in the market where it could win, and then focus intensely on becoming the best at that.

Like many companies, SunTrust had been spending too much time analyzing the “what” of strategy—the goals, targets, objectives, and metrics of the business. Nothing wrong with that, of course, but by comparison, there wasn’t enough time spent on the “how” of the business. Not enough time on the “who,” the “when,” and ultimately, the “why.” Collectively, these questions define the domain of execution.

And that’s where SunTrust was missing the mark. Over several years, Rogers and team refined the bank’s approach to strategy execution to integrate and balance these priorities for execution excellence. The approach became essentially an operating framework for the strategy sessions. And more than that, it became a key approach to running the business every day, baked into the culture.

SunTrust’s results were impressive. The company’s overall performance improved from last quartile to median performance or better in all key indicators. It achieved a substantial improvement in its efficiency ratio, decreased costs, and enhanced customer value. As a result, SunTrust achieved market-leading performance in shareholder value among the top ten banks.

But even with this progress, there was less celebration than you might imagine. Why? Because the job is never done. As SunTrust improved, it continued to look for additional performance breakthroughs. As Rogers put it, “From a performance standpoint, we’ve clearly outperformed. You know, we’re not there [yet]. I want to be best. You know, we’re not best. We are really better. We’re a lot better.”

In this book, we’d like to tell more of SunTrust’s story. And of other companies like it. The reality is that SunTrust’s journey is not particularly unique. Winning in business and sustaining success is complicated and difficult. Nobody is immune from the challenges of execution. Even perennial powerhouses like General Electric, Boeing, or even Apple stumble from time to time. The key is how they respond.

How pervasive is the execution challenge? A recent Conference Board Survey of CEOs identified execution capability as the number one concern facing today’s business leaders. The joke was that execution is so important, it was ranked number one AND number two in the survey. Another study found virtually the same thing. More than four hundred global CEOs in Asia, Europe, and the U.S. ranked executional excellence at the top of the list of some eighty different challenges, surpassing innovation, geopolitical instability, and top-line growth.1

The data on this are fairly compelling, and there is good reason for concern. Here are just a few more data points:

• Kotter reported that 70 percent of all strategic initiatives fail because of poor execution.3

• A Booz and Company study found that employees in three out of every five companies rated their organization weak at execution because strategic and operational decisions are not quickly translated into action.4

Add it all up, and the conclusion seems to be glaringly obvious: (1) execution is important both strategically and operationally, (2) many of us, regardless of industry sector, need to be better at it, and (3) poor execution is a leading cause for concern among CEOs.

But rather than fall into the trap of “admiring the problem” and not addressing the solution, we followed up on these studies with our own investigations. We convened a series of C-suite roundtables with senior executives from a variety of companies. American Express hosted one roundtable in New York City; Marriott hosted one in Washington, DC; McDonalds hosted one in Chicago; Hewlett Packard hosted one in Palo Alto; and SunTrust hosted one in Atlanta (see the list of participating companies in Table 1.1).

We invited executives from a range of industries to get a cross-section of perspectives from manufacturing, service, technology, health care, government, etc. Most of the participating companies were fairly large (Fortune 500) and recognized for success in their industries, so our sample was skewed a little bit by that. But we made no effort to simply select and benchmark top firms, even though many were the best at what they do. Rather, we wanted a diverse set of companies with a range of experiences, who could share their successes and struggles, what they had tried, what had worked, and what they continue to learn.

WHY SO MUCH INTEREST?

The roundtables generated a lot of interest and enthusiastic participation from senior executives. It became clear to us that the goal of execution excellence was something most organizations were trying to achieve, and something few believed they had truly mastered.

In part we wanted to use these forums to road-test our ideas, as a sort of reality check. But generally we just listened. We had learned a lot from the SunTrust experience, but we wanted to absorb how others saw the problem and how they approached the challenges of execution.

Many participated because they wanted to learn as well, and they came with more questions than answers. The groups were kept small, and everything was confidential, not for attribution beyond the room. Because of those stipulations, the conversations were frank, unvarnished, confronting at times, and honest. These were smart people with vast experience and enormous responsibility, who took the time to share with one another and offer their insights. Perhaps most telling, there was less “advice giving” than one might have imagined. No one claimed to have all the answers.

We invited participants to first engage in a divergent process, laying out the many factors underlying execution successes and failures. Then we moved toward convergence, urging the participants to combine and compartmentalize related factors to consolidate and synthesize their lists to the most important drivers of execution excellence.

And we learned a ton.

WHAT HAVE WE LEARNED?

We learned a number of things from these roundtables, and heard several common themes repeated from one session to another. Subsequent to that, we created an online diagnostic survey, and have since worked with a broader set of executive teams in Europe, Asia, and North America to help them work through the execution challenge. And we have taken a deeper dive into five “spotlight” companies to learn from their experiences, to ground our research in practice, and to shine a light on the perspective from their CEOs and leadership teams.

1. D. Sull, R. Homkes, and C. Sull, “Why Strategy Execution Unravels—and What to Do About It,” Harvard Business Review (March 2015), https://hbr.org/2015/03/why-strategy-execution-unravelsand-what-to-do-about-it.