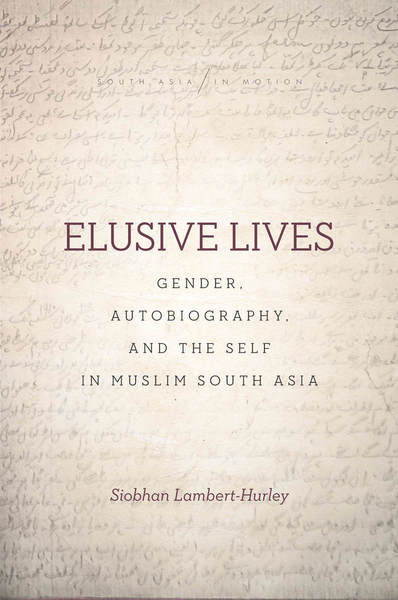 Elusive Lives
Gender, Autobiography, and the Self in Muslim South Asia
Siobhan Lambert-Hurley

What does it mean to write autobiography in a cultural context, like Muslim South Asia, that idealizes women's anonymity? Framed as "the ultimate form of unveiling," the introduction links the book to a feminist project of decoding a gendered self and a history of the everyday. South Asian Muslim women are defined as a category before their autobiographical writings are introduced as a largely modern phenomenon connected to Muslim reformism. The book's analysis is situated within the context of Muslim autobiography and historical approaches to autobiography. Methods and sources are also considered in terms of the book's move beyond individual authors and texts to a broad base of materials constituting the autobiographical sample. It elucidates the complicated and sometimes haphazard research process by which materials were recovered from smaller libraries and private collections in India, Pakistan, and Bangladesh—with the home, the street, and the market as an archive.

A major concern of theorists has been to define autobiography as a genre apart from other literary forms. Applying these debates to Muslim South Asia, chapter 1 considers how to find and fit "real-life" historical sources into the theoretical boxes dreamt up by academics often limited to European and North American materials. In doing so, it explores the range of possible sources to be included in a "life history archive"—from autobiographical biographies and biographical autobiographies to travelogues, reformist literature, novels, devotionalism, letters, diaries, interviews, speeches, film, and ghosted narratives. Ultimately, it settles on the term autobiographical writing to capture the constructed life in written form while linking to autobiography's global canon. The heterogeneous practices of South Asian Muslim women—not always complete, coherent, linear, self-centered, or driven by personality—are thus opened to analysis.

2 The sociology of authorship
chapter abstract

This study is limited to the autobiographical writings of South Asian Muslim women. The majority of authors from the sixteenth century into the twenty-first century may be characterized as elite: upper- or middle-class or, in the context of Muslim South Asia, sharif to indicate "noble" status. Many were also highly educated—often to the degree level and beyond in the twentieth century. In most cases, this education enabled authors to pursue an occupation when few women and even fewer elite Muslim women did so: as women at court, educationalists, writers, politicians, and performers. The function of autobiography as a vehicle for sharif redefinition above all, but also nationalism, historicism and didacticism, literary creativity, and performance is thus highlighted alongside a more general impulse: to narrate a life momentous for Muslim women living at a particular time and place.

In what ways does an author's physical location, religious affiliation, linguistic choice, and (un)intended readership affect why and how South Asian Muslim women write their lives? In terms of motivation, this chapter demonstrates autobiography's links to sharif redefinition in the reformist and princely locations that act as hubs for women's autobiographical expression. It also points to how socioeconomic, cultural, and historical specificities enabled women's autobiography to flourish within certain Muslim locations in the modern era. Women's associations with urban conurbations underline the city's role in offering cultural leadership to autobiographical expression and a home to religious minorities wanting to "talk back." In terms of autobiographical construction, performative models are employed to argue for the importance of specific audiences in shaping how Muslim women crafted their autobiographical outputs at different historical moments: from the colonial to the postcolonial, the reformist to the nationalist, the regional to the global.

4 Staging the self
chapter abstract

How do different literary milieus—published/unpublished, magazine/book, translated/edited—shape an autobiography's form and content? This chapter underlines how different processes of production introduced new actors—editors, translators, cowriters, and publishers—that could be as complicit as the author in the construction of a gendered Muslim self. A detailed case study of Begam Khurshid Mirza's autobiography—which appeared in four iterations—is employed here to consider "a performer in performance." The analysis shows how the author's identity and assumptions as a Pakistani actress, wife, and mother could be overwritten by a protective family, feminist editors, and an Indian press keen to tailor her interests, perspectives, emotions, and sexuality to their own expectations. The chapter's conclusions, though elaborated with reference to Muslim South Asia, have important implications for how historians and gender scholars interrogate individual texts for women's agency and subjectivity.

Gender theorists have long articulated a "difference" model applicable to women's autobiography—but do women actually write their lives differently than men? This chapter interrogates this theoretical frame by using a closed case study of one extended family in which the cultural milieu was largely shared to examine how autobiography's form, style, and content were contingent on gender and time. Chosen for analysis is Bombay's Tyabji clan on account of its many and varied contributions to the autobiographical genre, including family diaries, travelogues, speeches, memoirs, autobiographies, and articles that date from the mid-nineteenth century to the near present. Ultimately, the model for theorizing women's autobiography in terms of gender difference is shown to fall short when applied to the Tyabji case. By essentializing women and men across cultures and time, it fails to recover the specific subjectivities associated with different global locations at particular historical moments.

The coda returns to the metaphor of unveiling to explicate the gendered historical phenomenon of autobiographical writing in Muslim South Asia. It argues that to write autobiography—to narrate childhood, marriage, domestic life, everyday rituals, trials and tribulations, perhaps even one's thoughts and feelings—is to transcend the most severe limits on women's bodies and voices alike. At the same time, it uses the ambiguity of unveiling in real-life situations to point to how the unveiling in autobiography may not be total or straightforward. It may be symbolic, convoluted, partial, or paradoxical. It may be undertaken only by particular individuals or groups for particular purposes at particular moments. Moreover, the historical parameters—when and where, but also how and why—are crucial to understanding how this bold act was constructed and construed.