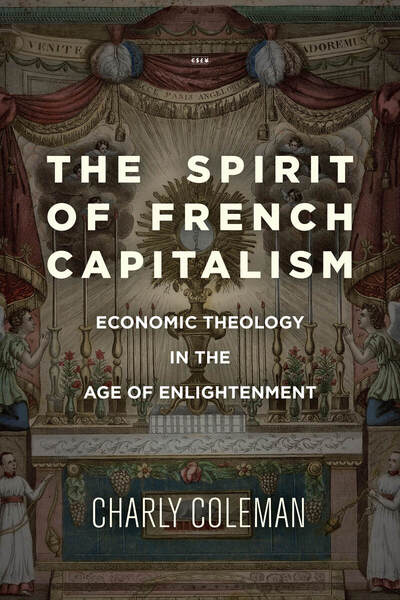 Against assertions of Anglo-American exceptionalism, this book shifts attention to the economic writings of theologians in France, the most powerful Catholic kingdom in eighteenth-century Europe. In so doing, it argues that Catholic economic theology prepared the ground in which the master-ideas of Enlightenment political economy took root. Beyond wielding enormous financial power, the church administered an infinitely reproducible treasure of grace through the sacraments. In contrast to Max Weber's thesis in The Protestant Ethic, I make the case for a distinctly Catholic ethic that animated the spirit of capitalism by valorizing the enjoyment of consumption over delayed gratification. Only by engaging with Catholic economic theology can we begin to understand how the quintessential capitalist fantasy of unbridled consumption first coalesced—in ruminations on the mystery of the Eucharist, the generative faculties of money, the legality of usury, the allure of commodities, and the limits of luxury.

1 The Economy of the Mysteries
chapter abstract

In response to Protestant challenges, the Catholic Church avowed that the Eucharist operated as a sign that brought the body and blood it signified into being. Yet the prelates at the Council of Trent did not merely reiterate ancient teachings; rather, their deliberations marked a shift in emphasis from the visceral or fleshly aspect of the rite to its economic valence. Reverence for the host surged among the thousands who enlisted in religious and lay confraternities. Members incurred devotional as well as financial obligations, the fulfillment of which made one eligible to receive indulgences granted by the pope. Their liturgies articulated a new Christian variant of materialism, with the Eucharist as its venerable base. Professional theologians defended transubstantiation by justifying the doctrine as a means of spiritual enrichment that assured consolation in this life and eternal beatitude in the next.

The value of frequent communion remained a source of deep controversy throughout the seventeenth and eighteenth centuries. In the 1640s, Antoine Arnauld challenged abuses in the administration of the Eucharist and penance, drawing the lines of a protracted theological battle between the Jansenist militants of Port-Royal and the Society of Jesus. A century later, the Jesuit Jean Pichon's defense of frequent communion elicited a response no less violent than had Arnauld's criticism of the practice. During the same decade, it fell to the French crown to adjudicate between the parlement of Paris and the Gallican episcopate in cases involving the refusal of the sacraments to Jansenists. This dispute carried sweeping implications for the limits of royal as well as clerical authority, and even compelled ruminations over whether subjects had a right to communion akin to that of property.

3 The Spirit of Speculation
chapter abstract

Sacramental theology exerted a surprising influence on the reception of John Law's System, proponents of which depicted banknotes and company shares as yielding previously unfathomable riches. A Eucharistic-alchemical complex lent itself to describing these instruments and their myriad effects. Priests-cum-alchemists explicitly likened the philosopher's stone to the consecrated host. Cartesians such as Jean Terrasson justified the infinite extension of matter with direct references to the sacrament. In defending Law's reforms, he went so far as to transpose his metaphysical doctrines into an economic theology of money. He held that, like the Eucharist, paper's efficacy followed from its dual nature as both visible and transparent—that is, as a means of exchange that not only passively reflected but also brought into being the very existence of wealth. The spiritual ideal of boundlessness drove participation in Law's System, emboldening investors to place their faith in accumulation without limit.

The eighteenth century offered novel answers to the perennial question of usury, which the church formally banned but in practice permitted. Pope Benedict XIV's 1745 encyclical on the legitimacy of interest-bearing contracts prompted soul-searching among clergy and laity alike. The archbishop of Paris commissioned lengthy compendia on how priests and parishioners should conduct themselves in commercial transactions. Theologians who favored interest—including Turgot, an ex-seminarian—highlighted the peculiar character of money as a substance that could maintain and even augment itself. Defenders of tradition denied that financial instruments could share in the representational productivity of the sacraments, thereby implicitly confirming the association. Even as credit relations grew more impersonal, the French economy could not subsist without faith in money's capacity to breathe life and value into matter.

5 The Cult of Consumption
chapter abstract

Devotional objects such as crucifixes, rosaries, and religious images, the market for which escaladed after Trent, served as an incitement to spending for pleasure. Instruments of piety possessed value not only as productions of artisanal labor authorized by church and state but also as keys unlocking spiritual treasures. Like the Eucharist, the rosary in particular attracted mass devotion on the part of the laity. Once established as a remunerative observance, the demand for prayer beads set an entire economy in motion. Confraternities were founded with the ideal of saying the rosary in perpetuity. Trade corporations and religious orders sold the necklaces in shops and along pilgrimage routes. Successive popes actively encouraged the market by issuing indulgences for little more than the donning of an accessory. Huguenot skeptics like Jean-Frédéric Bernard and Bernard Picart took note of the church's permissiveness as proof of its spiritual venality.

6 Luxury and the Origins of the Fetish
chapter abstract

Eighteenth-century luxury debates remained fertile ground for economic theologians. Priests led the charge in condemning luxury as the symptom of a deep-seated spiritual illness, with women as its most dangerous vector. Those afflicted fell prey to a delusion that worldly idols could bring the fulfillment that only celestial riches promised. Theological appraisals of feminized luxury acquired new force in the middle decades of the eighteenth century, as French subjects immersed themselves in a glittering market for goods. Like their clerical contemporaries, philosophes sought to distinguish legitimate sources of wealth from wasteful profligacy. Rousseau joined the Physiocrats not only in elevating agriculture as nation's material base but also in avowing jouissance as the guiding virtue of economic activity. Turgot supplemented the landed theory of value with his observation that proprietors were motivated less by pastoral virtue than the pleasures that money could buy.

Although the idea of the commodity fetish is often attributed to Karl Marx, ecclesiastics had long denounced luxury as idolatrous while, at the same time, inscribing profusion in the very materials of the sacrament. Marx drew on this tradition in Capital, a text that employs Catholic terms, even transubstantiation, to account for the allure of manufactured goods and belief in the power of money to reproduce itself through mere circulation. Walter Benjamin would further develop these insights in his work on nineteenth-century sites of consumption, especially the Parisian arcades. Émile Zola would do the same for department stores. Even today, French fashions remain deeply indebted not only to religion, but especially to the rich history of Catholic devotion. Designers such as Coco Chanel, herself raised by nuns, further exemplify the associations between France and luxury in the popular imagination.