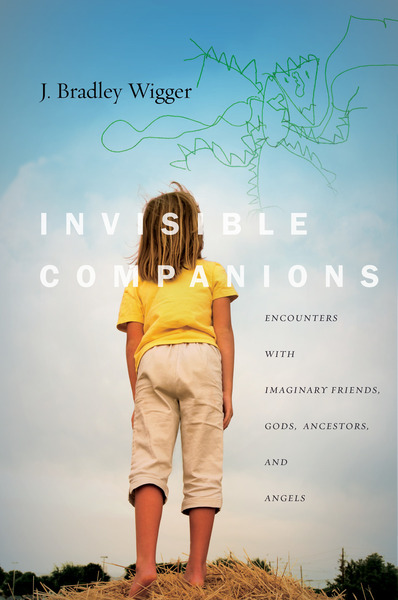 Nathan, who created the drawing, was also four years old when we met. He called Quack-Quack one of his “pretend friends,” to distinguish him from the kind I’d be able to see without the help of crayons. And there were more: Tadpole, who was one year old and one inch long; Jump-Jump and Jump-Jax, brothers who were eight; and Daisy, a robin who was one hundred years old and Nathan’s favorite, his “best pretend friend.” While Nathan is not the boy’s real name—new names were made up for all the children discussed here to protect their anonymity—the names of the imaginary friends, paradoxically, are real.

As I walked across the campus where I teach, I wondered whether it had been a mistake suggesting the school as a location for the interview with Nathan. Not only are we a theological training ground, we train marriage and family therapists as well, and I was about to meet Nathan and his father in our counseling center, which clearly says Counseling Center at the entrance. It was otherwise ideal for talking with children since the center not only had a room with toys and stuffed animals, but it also had cameras and a one-way mirror for observation, much as you see on cop shows. A parent could stay on the other side of the mirror while the conversation with the child took place. That was great for preventing a parent from answering for a child, but the more I considered the context, the more I worried that Nathan’s dad would think that we think that something is wrong with a child with an imaginary friend, let alone, as it turned out, a boy with several.

Nathan himself was too young to read, at least too young to read the big words of the sign. A bright, outgoing boy, he wore an Indianapolis Colts sweatshirt for the interview and a nearly constant smile. He was delighted to talk about his pretend friends. And despite my concern, I quickly discovered that his father was more than okay with my interviewing Nathan, whatever the context. Dad was actually excited by my interest as he too had befriended imaginary companions as a child. He loved the idea that Nathan could help a project designed to better understand children and their imaginative play. In fact, they had hoped Nathan’s older brother, Sam, seven years old at the time, would talk to us as well. He too had several pretend friends. But Sam declined the invitation. According to his parents, Sam was shyer about his friends. Even though imaginary characters were fully accepted into this household, Sam was old enough—and self-conscious enough—to realize that others might not be as hospitable to his imagination as his family. And the more I would dig into this research, the more I would realize the price children pay for cognitive “development.” Growth into the adult world comes with suspicion and anxiety for things invisible. I wonder at times what kind of mind is actually developing if invisible characters and friendships have to leave to make room for it, or even if they do manage to hang on for a while, you can’t talk about them. In the end, I did find older children who were willing to talk about their imaginary relationships with me, yet they did so with caution, as if there were a sign over my head saying Slow: Adults NOT at Play.

You may or may not be surprised to learn that on a few occasions, I had adults approach me: “In your research, have you run across any adults who have imaginary friends?” An academic who can lose herself in imaginary adventures with her friend; an artist who finds continued inspiration from her childhood invisible horse; a pastor who found a healing presence in the form of a wise elder woman from his home country; and a therapist who regularly interacts with dream figures in what Carl Jung called active imagination. In these instances I was surprised by the eagerness of these high-functioning citizens of the adult world to share their stories with me. Mine was certainly research focused upon children and childhood imagination, but it was as if these adults were wanting to stay connected to something or someone, to a friendship that still held meaning and power. Something as simple as my interest in invisible friends made me a friend, an ally, to their own imaginations.

Even so, I discovered after the interview with Nathan that he too, as open as he was, had held back. Talking with his father, I commented upon all the wonderful pictures his son had drawn of these five different friends. His father responded, “Well, on the way to our interview, Nathan told me he actually has five more friends, but he wasn’t going to talk about them. When I asked him why not, Nathan said, ‘They told me not too.’”

Nathan was one of forty children between two and nine years old that our research team interviewed over the course of a year, children recruited from local schools and churches where I live in Louisville, Kentucky. Nathan’s menagerie of friends challenged two assumptions I had held before arranging any interviews. One assumption was that a child would only have one imaginary friend, perhaps a kind of alter ego, but singular nonetheless. After all, Cora had only Crystal. “He has several friends,” Nathan’s mother said to me as we were setting up a time, “but I’ll let him tell you about them.” The second assumption was that imaginary friends would be more or less human. His mother hadn’t mentioned their animal nature. When I asked his father, privately, about all the animals, he explained that Nathan’s pretend friends had once been human, but about the time he started going to preschool, they became animals. “Maybe it’s because he has lots of kid friends now?” his father wondered aloud. I soon discovered that Nathan was not alone in having multiple nonhuman friends.

Andrea was four at the time of the interview and had been playing with her imaginary friends for about a year, according to her mother, beginning with Biah-Biah—a girl who was sometimes an M&M with arms and legs. Perhaps she drew the idea from the television commercials featuring animated versions of the candy. But, like Nathan, she had multiple “imagination friends,” as she called them, some candyish, some human and otherwise. There was a girl, Lacey, who wore old-fashioned skirts, and Han, who had no eyes and got in trouble a lot. Her friend Eliana, according to Andrea, was under her sleeve during the interview, while Hein was under the carpet. In addition, there was Teapot (“I call her Tea,” Andrea explained), “who was a boy and is now a girl—she changes.” Her mother thought Andrea got the idea for Tea from the animated film Beauty and the Beast, which featured a singing teapot, Mrs. Potts. Though Andrea had based two of her imagination friends upon characters anyone could see on film or television, nonetheless she pointed out that “you can’t really see them.” In addition, she provided another drawing of Han at the end of the interview because, she explained, he looked different from when she drew him the first time, the day before.

For some children, naming their friends is not a priority. Three-year-old Eva liked to play with her “babies,” as she called them, often having tea parties with them. “She loves to serve tea to each of them,” her mother explained. She went on to tell how Eva, “right before Christmas, went through a period of setting up a chair, like a teacher, and reading to all of her friends.” It may be no accident that her mother is a teacher, a professor at a nearby college, and books and reading fill their home. Eva’s mother also had imaginary friends as a child, but for her the names were more important—and memorable. She listed them as she counted on each finger: “Eenie, Meenie, Miney, Punny, and Potsah.” She laughed a little as the names came to her so easily, some three decades later.

I thought of Lucy, a kind woman of seventy-something in our church who sits right behind me. A couple Sundays earlier she told me, “Jane told me about your research, and I’m so excited. I told her I’ve got to tell Brad about my imaginary friends.” Her eyes beamed as if she were a child again. “I had meetings with them!” Presbyterians are organizationally notorious for the number of committees and meetings we have, and we both chuckled at the idea of her young self playing to stereotype.

“Pretend friends”: Nathan’s phrase “pretend friends” raises the issue of terminology for this phenomenon, for which there is great variability—among children and parents themselves as well as in the literature over the past century (see Appendix). Rather than trying to neaten this variability, I have chosen to reflect it by using various terms, including the simple abbreviation IF, which can stand for invisible friend or imaginary friend. Research team: I am very grateful to Ada Asenjo, Katrina Paxson, Lacey Ryan, and Jannine Sayago-Gonzalez—the interview team who helped recruit children to interview as well as helped to interview them (and record the sessions so that I could watch or listen later). Ethical standards: The project was reviewed and approved by the Institutional Review Board of Louisville Presbyterian Theological Seminary. Parents or guardians provided informed consent for any interviews conducted; children too provided verbal assent for interviews and use of the drawings.