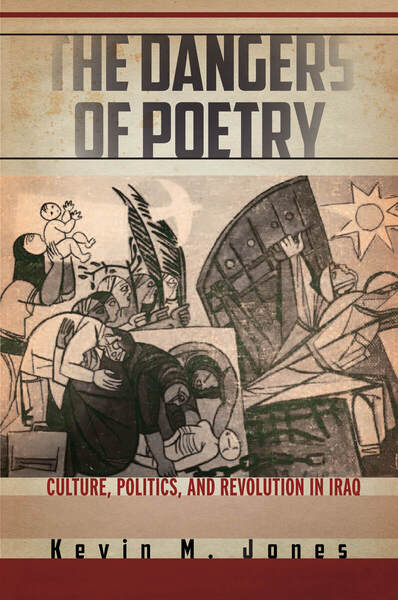 Contents
Excerpt from Introduction
Contents and Abstracts
Introduction: "The Spirit of the Rebel Poet"
chapter abstract

The introduction outlines the concept of rebel poetry and the relationship between poetry and the political struggles against colonialism and dictatorship in modern Iraq. It traces the broad contours of Iraqi political history and explains how poets shaped the cultural politics of important national debates and discourses. It challenges the traditional distinctions between high culture and mass culture that have traditionally consigned poetry to intellectual and literary history and shows how the unique cultural landscape of modern Iraq allowed poetry to maintain a liminal position between these distinct cultural strata. The introduction argues that the public role of poetry in modern Iraq made poems social acts as well as literary texts and that the very popularity of poetry made it a dangerous cultural endeavor.

This chapter details the engagement of Iraqi poets with the Arab Nahda of the late nineteenth and early twentieth centuries. It provides a brief account of the social role of poetry in late Ottoman Iraq and a survey of the neoclassical poetry revival in Egypt and Syria. The chapter shows how Iraqi poets used the Nahda press to articulate their own relationship to modernity and reveals how new appreciations of the singularity of Iraq's poetry tradition inspired proto-nationalist conceptions of Iraqi culture. Finally, the chapter examines the efforts of a new generation of young Najafi poets to promote the pioneering role of their own Najafi predecessors and reconstruct the historiography of the Arab Nahda for a broader Arab audience in the early twentieth century.

2 Rebel Poetry: Colonialism and the Poetry of Rebellion, 1914–1920
chapter abstract

This chapter uses the concept of rebel poetry to illustrate the utility of anticolonial poetry as a method of public protest and public communication in the aftermath of World War I and the British occupation of Iraq. The chapter shows how Iraqi poets navigated divided political loyalties to rally popular support for the Ottoman Empire or the nascent Arab nationalist movement during the war and how poets accepted or rejected colonial patronage to support the British occupation. Most important, the chapter shows how prominent rebel poets challenged colonial rule and how the colonial state responded by regulating both public space and culture discourse. It also examines how Iraqi poets employed the new secular vocabulary of nationalism to challenge sectarianism and articulate their own vision of anticolonial modernity.

This chapter explores the patronage relationships between poets and political elites through the evolution of the panegyric in the colonial state. It looks at how the Hashemite state subsidized popular poets in order to cultivate their own political legitimacy and how dissident poets challenged the state through creative public performances. It argues that modern protest poetry emerged from the dissident panegyric, which became subversive when poets praised political elites for their commitment to policies that those elites could not or would not actually support. The chapter also shows how poetic engagement with social issues like women's education and veiling shaped popular opinion and contributed to growing social cleavages between generations and how patronage rivalries contributed to new sectarian tensions in Iraqi political life.

4 Patriots and Traitors: The Cultural Politics of Nationalism, 1932–1945
chapter abstract

This chapter argues that the rhetoric of "patriotism" and "treason" that dominated nationalist politics evolved in the public poetry surrounding two seminal events in modern Iraqi political history, the Bakr Sidqi coup d'état of October 1936 and the Rashid Ali movement of April 1941. The chapter documents the popularity of each movement and shows how partisan support for military intervention was shaped by the shared logic of anticolonial nationalism. It documents the social and political consequences that socialist and nationalist poets faced and examines how political persecution inspired the new socialist-nationalist alliance of the "national front" politics that would dominate opposition politics in the 1950s. The chapter also shows how the relaxation of state censorship of the Left during the World War II allowed leftist poets to articulate a new political vision that fused anticolonial nationalism and socialist internationalism.

This chapter describes the era of the poetry of public spaces, when dissident leftist poets participated in massive popular protests and galvanized their audiences with defiant acts of public dissidence. The chapter also documents the rise of free verse poetry and analyzes the relationship between modernist aesthetics and the politics of commitment in Iraq. It shows how a young generation of modernist poets joined the Iraqi Communist Party and embraced the socialist internationalism promoted by communist poets in Europe, Asia, and Latin America. The chapter also addresses how a new generation of nationalist poets increasingly gravitated toward socialist ideals, embracing the Sartrean ethos of commitment and joining their communist comrades and rivals in articulating the new cultural politics of the national front.

This chapter explores the collapse of national front politics and the violent cultural conflict that followed the revolution of July 14, 1958. It shows how relatively minor ideological disputes over the meaning of "Arab unity" evolved into a vicious cultural confrontation between communists and nationalists. The chapter documents the role of nationalist poets in constructing an anticommunist cultural discourse that emphasized the sexual immorality of their rivals. Their own vision of "muscular nationalism" portrayed the nationalist Bath Party as custodians of national honor and progressive advocates of women's liberation. Communist poets struggled to combat these allegations by defending the progressive aspects of their agenda, but they remained hesitant to address questions of gender and sexuality directly. The poetry wars of this period critically shaped the cultural politics of national liberation and presaged the sectarian violence of the coming decades.

Conclusion: "We Are What Flows through Every Soul and Spirit"
chapter abstract

The conclusion documents the tragic fate of many poets who participated in the anticolonial struggle for national liberation during preceding decades. It documents the experience of torture, imprisonment, and exile suffered by communist poets after the Bathist coup d'état of February 1963 and shows how the legacy of communist poetry was systemically erased from the historical and literary record in subsequent decades. The conclusion also discusses why the singular historical phenomenon of rebel poetry was ever possible in Iraqi and why it was no longer possible after 1963. It concludes with a discussion of poetry and dissent in contemporary Iraqi society.