STANFORD
UNIVERSITY PRESS
Between Empire and Nation
Muslim Reform in the Balkans
Milena B. Methodieva 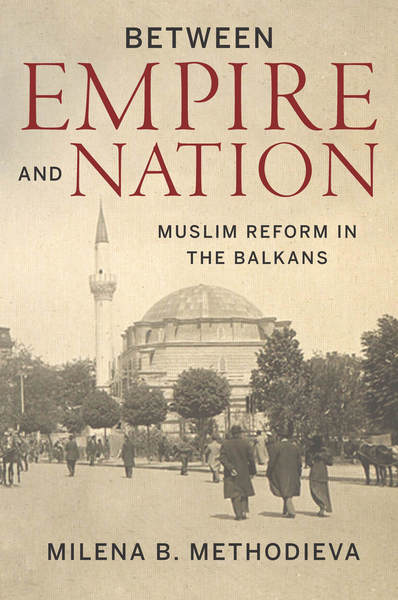 Between Empire and Nation
Muslim Reform in the Balkans
Milena B. Methodieva

In addition to providing an overview of the existing scholarship on the Muslims and Turks in Bulgaria, the introduction presents the subject of this book. The book follows the history of the Muslims in Bulgaria (mostly Turks but also Pomaks, Tatars, and Roma) in the first crucial decades after the establishment of modern Bulgaria on former Ottoman territories. More specifically, it focuses on the activities of a movement for cultural reform and its efforts to reshape local Muslim society, a phenomenon neglected by scholarship so far. The book seeks to bring out the history of Bulgaria's Muslims from the confines of "minority studies," and put it in a new framework of inquiry, while underscoring how the community also remained a part of the Ottoman world.

This chapter begins with an overview of the Ottoman imperial context and the processes leading to formation of Muslim communities in the Balkans. Then it turns to the events leading to the establishment of modern Bulgaria. The Bulgarian uprisings of the 1870s and the Russo-Ottoman War of 1877–78 were crucial events. They had important consequences for intercommunal relations, as well as for the emergence of civilizational and humanitarian discourses that influenced the views of Bulgarians, Ottomans, and Bulgaria's Muslims. Hailed by Bulgarians as their "liberation war," the Russo-Ottoman War was a formative experience for the Muslims as it was accompanied by violence, mass flight, and destitution. The chapter underscores the unique features of the 1878 San Stefano and Berlin Treaties that sought to provide guarantees for the protection for all communities, including, for the first time, the Muslims.

The newly established Bulgarian state came to encompass a sizable Muslim population. In spite of further emigration, in the early 20th century there were 600,000 Muslims in Bulgaria. A living legacy of Ottoman rule in the region, they became the country's most sizable minority that was implicitly connected with the Ottoman state. This chapter follows Bulgaria's efforts to administer and govern these Muslim populations, particularly in view of doubts about their loyalties and concerns that they could become the channels of Ottoman intervention in its internal affairs. It also looks at the question of the place the Muslims and different Muslim groups assumed in the emerging Bulgarian national imagination. The Ottomans, for their part, were faced with the question of finding new ways to maintain connections with this community.

3 Doing Away With Empire
chapter abstract

The chapter examines how the transformations in the Bulgarian cities and countryside affected the Muslims and their institutions. From the first years of its establishment Bulgaria embarked upon an ambitious program of urban development whose goal was to do away with the vestiges of Ottoman imperial presence and bring the appearance of Bulgarian cities in line with European models. But these efforts were not targeting defunct institutions or obsolete practices; in reality, they affected Muslims and their institutions. In the countryside one of the most notable developments was the transfer of considerable amount of land from Muslim into Bulgarian hands. The chapter concludes with a discussion of public health measures, particularly those related to Muslim pilgrimage. These policies produced a sense of crisis among the local Muslims and in turn, they acted as a catalyst for the emergence of reform initiatives.

The chapter traces the origins of the reform movement in Bulgaria to three interrelated developments: the emergence of an independent Muslim press which served as the means for the spread and coordination of reform initiatives, the rise to prominence of a younger generation of Muslims, most of them teachers and journalists, who were the primary driving force of these endeavors, and the spread of the Young Turk opposition organization to Bulgaria. The reformist Muslims saw a common cause with the Young Turks, many turning into sympathizers of the opposition organization. Young Turk anti-establishment rhetoric and their emphasis on the importance of modern science resonated with many reformist Muslims. This chapter presents the biographies of some of the most important figures involved in the events under discussion.

The chapter explores in detail the activities of the reform movement. The first important task was the reform of Muslim education. Other initiatives included evening literacy and vocational training classes. The k

One of the most important goals was to encourage Muslims to participate in politics in the name of higher patriotic ideals. The Bulgarian political context presented opportunities and obstacles. Bulgaria was a parliamentary electoral democracy and Muslims became involved in political life from the very beginning. Although some Bulgarians were skeptical about Muslims participation in elections and the national assembly, Bulgarian political parties routinely courted Muslim votes. Certain prominent reformist figures argued for the establishment of a Muslim political party which would be the only proper advocate of Muslim interests, however, such ambitions were not realized. At the same time, reformers contested the position of the established Muslim leadership resorting to common tactics popular in the local political environment. The chapter looks at some of the major campaigns launched by Muslim reformers, as well as the actions of their Muslim adversaries.

The chapter explores the emergence of new ideas about community and belonging among Bulgaria's Muslims. For many reformist Muslims the homeland was the most sacred ideal; it could be Bulgaria, the Ottoman Empire or an abstract place. During the period under consideration "Muslim" was the most common term of self-designation regardless of the Muslims' background. But at the beginning of the 20th century "Turk" started to acquire wider popularity within certain circles, while an argument between Turks and Tatars provides an opportunity to explore the different perceptions of identity. At the same time Bulgaria's Muslims became increasingly aware of being part of a larger world in which many of their coreligionists shared similar challenges. The chapter looks specifically at the contacts with Crimean Tatars and the Muslims of Habsburg Bosnia, and visions of Pan Islamic unity. The chapter ends with the reactions to the Young Turk revolution.

The elation of Bulgaria's Muslims with the revolution was short-lived. Soon after, Bulgaria declared independence, raising fears about a possible war with the Ottoman Empire. In this tense environment Muslim life came to a standstill. Tensions dissipated with the signing of a Bulgarian-Ottoman convention recognizing Bulgaria's independence. The Bulgarian and the Ottoman authorities negotiated an agreement concerning Muslim religious organization and the vakıfs in Bulgaria. In reality, it largely formalized the existing situation, although the Ottomans and the Muslims had objected to it. This conclusion evaluates the period and events under discussion, as well as its significance for subsequent events.