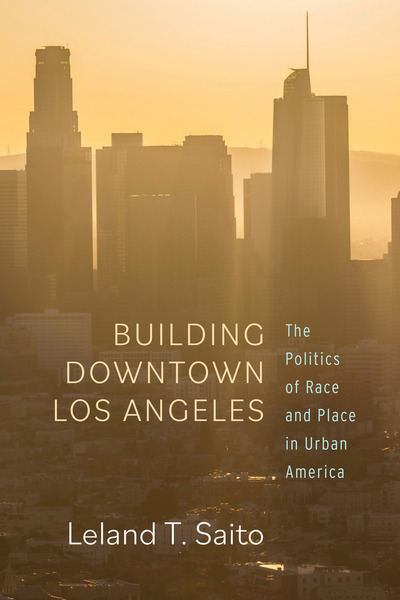 This chapter discusses the two main themes of the book. First, growth interests are working to transform downtown Los Angeles into a place of entertainment, culture, and commerce for affluent consumers and residents. Second, a progressive grassroots coalition is working to create policies to help build Los Angeles as an inclusionary place in terms of race and class and counter the history of displacement generated by large projects supported by growth interests. A pivotal event that illustrates the rise of the growth with equity coalition is the Community Benefits Agreement negotiated with the developer of L.A. Live, an entertainment district. I also discuss the relationship between policies, place, and race in a term that I coin: racial-spatial formation. As part of this process, I examine how policies are created, the ways in which race and class influence policy formation, and how those policies generate racial and spatial consequences.

In this chapter, I examine how Los Angeles city officials and downtown business interests led the campaign to build the Convention Center. The Center was a key part of the city's strategy to reverse urban decline due and rebuild the downtown core into a center of entertainment and commerce for affluent business travelers, tourists, and residents. I discuss the flawed financial analysis that predicted that the Convention Center would generate revenues that would pay for most of the costs for building and running the center, and instead, how the Center became a major financial burden for the city. I examine one of the major issues with the Center, which was a lack of hotel rooms within walking distance. I examine how city reports and Los Angeles Times articles described the site in negative terms, such as "blighted," which supported the destruction of the neighborhood and displacing residents.

This chapter examines a private developer, Anschutz Entertainment Group, and the construction of the Staples Center and L.A. Live, how these projects contributed to massive private investment and economic growth in downtown Los Angeles, and city support in the form of subsidies and eminent domain for these projects. Also examined is the displacement of residents by these projects and the continued destruction of the neighborhoods of lower income racial minorities.

This chapter examines the rise and decline of the downtown growth coalition. The chapter also examines the emergence of a growth with equity coalition to push for policies to protect the interest of lower-income residents, and the importance of unions, Latinos, and community organizations for this effort.

In this chapter, I examine the negotiations between the developer of L.A. Live and a community coalition for a Community Benefits Agreement (CBA). I suggest that this CBA represents a fundamental change in urban politics and inequality regarding development and illustrates the rise of a progressive coalition in the Los Angeles region and a key accomplishment in the coalition's support of growth with equity. I examine city policies, such as a living wage ordinance and an earlier Benefits Agreement with the Hollywood and Highland project, that laid the foundation for the L.A. Live CBA.

I document and analyze the CBA results, and the changing contexts that frame the positive early impressions and later mixed reactions. I examine the CBA results in terms of affordable housing, local hiring program, and establishment of a land trust. I suggest that CBAs are an important policy tool. However, because CBAs are too resource intensive for community organizations to negotiate and monitor with the many major projects occurring, in cities with strong progressive coalitions, I suggest that the next step is incorporating some of the major aspects of CBAs involving wages and hiring practices in city policies in projects involving significant public subsidies and/or large contracts. I examine hiring programs with these projects that are aimed at increasing the number of women and racial minorities in union jobs.

This chapter examines Anschutz Entertainment Group's effort to build an NFL stadium. Although the effort failed, it shows the strong support of Los Angeles city and California State officials for these kind of projects. Play Fair at Farmers Field Coalition emerged to represent the interests of community residents that would be impacted by the stadium. I examine how this group negotiated a CBA with AEG. I also examine demographic change in downtown Los Angeles caused by development. The main change was the growth in the number of Whites, who have become the largest group, while their numbers declined in the city. The number of Asian Americans has more than tripled, growing at a much faster rate than in the city. For Latinos, previously the largest group, their numbers held steady, which is the opposite of the city trend showing strong growth.

In this chapter, I revisit some of the main themes of the book, including racial-spatial formation, Community Benefits Agreements, the importance of the growth coalition, political support for large development projects, and the rise of the progressive coalition. I also discuss that as Latinos improve their economic status, my belief that affluent Latinos will support issues important to low-income and working-class residents. I examine current legislation on housing, and discuss the importance of race-specific policies to address racial inequality. I finish by discussing how changing views about social justice have the potential to create new possibilities for developing policies that are based on the idea that economic prosperity can work together with greater economic and social inclusion.