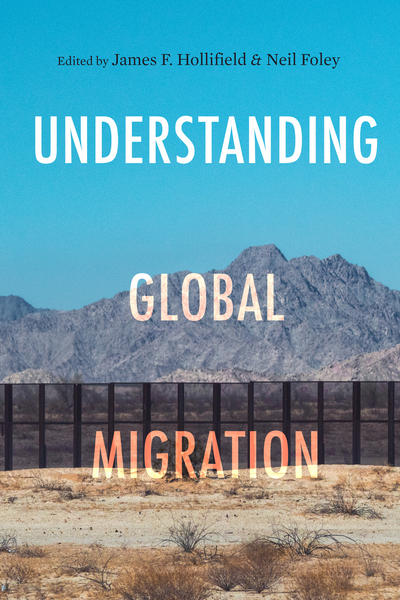 MIGRATION INTERDEPENDENCE AND THE STATE

UNDERSTANDING GLOBAL MIGRATION looks at the rapidly evolving trends in international migration in the twenty-first century, the root causes, the drivers and dynamics of migration, its consequences for human and economic development, and the challenges and opportunities that the movement of people presents for states and regions. The book covers major topics in global migration: the exodus of refugees from the Middle East and Africa to Europe; the surge in child migration from Central America through Mexico to the United States; the exodus of Venezuelans in Latin America; the fluid populations and boundaries of South and Southeast Asia; the displacement of populations in Africa resulting from climate change, failed states, and other natural and man-made disasters; the effects of pandemic on mobility and migration; and the rise of new migration states and regimes. A principal takeaway from this book is that there is not a single “migration state,” following the classic Western, liberal, and settler model, but rather a range of ways in which states grapple with migration in different historical and geographical contexts.

The book is based on a series of propositions. The first proposition of the project is that the state matters. International migration and mobility raise a host of economic, humanitarian, and security concerns for states in the global North and South. The garrison state was linked with the trading state in Europe in the eighteenth and nineteenth centuries. The twentieth and twenty-first centuries have seen the emergence of the migration state (Hollifield 2004a, 2012), where managing migration is vital for national development. The migration state is an “ideal type” that takes different forms in various regions of the globe, from the “liberal” state in classic settler nations to the “postimperial” state in Europe (evolving into a liberal type) and Turkey, to the “postcolonial” migration states in Africa, the Middle East, and South Asia, to the “developmental” migration state in East and Southeast Asia.

The second proposition is that we must put contemporary migrations into a historical and comparative perspective: Looking at recent migration “crises,” it is important to keep in mind la longue durée: The migration “crises” of the late twentieth and early twenty-first centuries pale by comparison with the upheavals associated with imperialism, the Industrial Revolution, the two world wars, and decolonization, which resulted in genocide, irredentism, the displacement of tens of millions of people, and the radical redrawing of national boundaries, not only in Europe but around the globe (Lucassen 2005).

Since the 1940s, international migration has been increasing in every region of the globe, feeding the fears of some who give voice to a sense of crisis—a crisis that is more political and social than economic. We know that migration is not a new phenomenon in the annals of human history (Gabaccia 2015). Indeed, for much of recorded history and for many civilizations, the movement of populations was the norm. Only with the advent of the nation-state in sixteenth-and seventeenth-century Europe and the imposition of the nation-state system through European imperialism did the notion of legally tying populations to territorial units (sovereignty) and to specific forms of government become commonplace. In the nineteenth and twentieth centuries, passport and visa systems developed and borders were hardened and closed to nonnationals, especially those deemed to be hostile to the nation and the state (Torpey 2000). Almost every dimension of human existence—social-psychological, demographic, economic, and political—has been reshaped to conform to the dictates of the nation-state (Kohn 1962), which in “settler societies” resulted in the displacement and dispossession of Indigenous peoples and in genocide (Dauvergne 2016).

The third proposition is that since 1945 human rights have become a central feature of migration governance: Do the recent waves of migration rise to the level of a crisis that threatens the political and social order in various states and regions of the globe? What are the drivers and dynamics of migration in a world that, until the global pandemic of 2020, was relatively open in market terms, with human rights playing an increasingly important role in human mobility? What are the consequences of population movements and forced displacement for human development? How can states manage the flows in light of the fact that there are strong economic pressures for openness and strong political, legal, and security pressures for closure—what Hollifield (1992) has called “the liberal paradox”? The global pandemic has heightened the dilemmas of migration governance, making trade-offs between openness and closure more difficult.

The fourth proposition is that migration has contributed to greater interdependence among states and regions: Migration is a force driving interdependence between regions and states. As states and societies became more liberal and open, migration increased, contributing to political and economic interdependence. With the strong nativist backlash against immigration in “the West,” migration is seen to be contributing to resurgent nationalisms and to a backlash against globalization (Norris and Inglehart 2019). How long will this backlash persist, will it spread around the globe, and will it undermine any chance for global governance and the ratification of the UN global compact on migration and refugees? Will the closure of borders and restriction of human mobility due to the global pandemic become permanent, reinforcing trends toward greater closure to protect public health? Will the pandemic and the populist backlash lead to the “end of liberalism” and the collapse of the rules-based, international liberal order?

The fifth proposition is that in the twenty-first century, migration is more vital for sustained economic and human development than at any time in history: Will migration be destabilizing, leading the international system into greater anarchy, disorder, and war; or will it lead to greater openness, wealth, and human development? Much will depend on how migration is managed in the core liberal democracies, and on whether there is a return to global migration governance in the post-Trump era. One takeaway from this book is that to avoid a domestic political backlash against migration in liberal societies, the rights of migrants must be respected and states must cooperate in global migration governance. Even as many states innovate and become more dependent on migration, they continue to face the challenges of the liberal paradox with its rights-markets dynamic and the need for societies to be economically open and politically closed (to protect the social contract). Does the liberal paradox apply in countries and regions where liberalism never took root? The authors in this volume seek to address these questions from a comparative, historical, theoretical, and policy standpoint, looking across regions and countries.