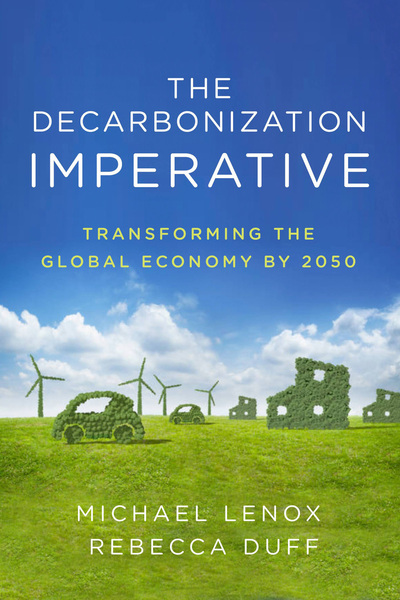 I MAGINE IT IS THE YEAR 2050. You travel to work in your electric vehicle. At home, the car is powered by a solar panel on your house which is connected to a smart grid that trades electricity so that you have electricity on cloudy days and you power others when you have excess. The home itself is made of and filled with low-carbon materials: mini-mill-produced steel, green cement, sustainable timber, and green plastics. The food on your table comes from sustainable farming that minimizes the need for nitrogen-based fertilizers and includes protein from sources other than beef.

Fanciful? Perhaps. Necessary? Absolutely. Because if we are going to avoid the worst effects of climate change, we are going to need to effectively “decarbonize” the global economy by 2050. Think about this for a second. This doesn’t mean a modest, or even a drastic, improvement in fuel efficiency standards for automobiles. It means 100 percent of the cars on the road being battery-powered electric vehicles or some other non-carbon-emitting powertrain. It doesn’t mean a substantial increase in renewable solar and wind energy. It means 100 percent of our global electricity needs being met by renewables and other zero-carbon-emitting sources such as nuclear power. It means global electrification and material substitution in the industrials sector, eliminating scope 1 emissions—emissions in production—across steel, cement, petrochemicals, the backbone of the global economy. It means electrifying all residential and commercial buildings. It means sustainable farming and preservation of carbon sinks while still feeding a growing global population.

This is the challenge of our age. This book is about how we might realistically get there.

Every day the evidence accumulates. Hurricanes. Floods. Droughts. Extreme weather not observed in anyone’s memory. The five hottest years ever recorded have occurred since 2015.1 By 2020, global average temperature had increased 0.5 degree Celsius compared to the 1986–2005 average.2 Sea levels have risen by five to eight inches on average globally since 1900.3 While these changes are seemingly minor in scale to some, scientists warn that they portend more significant disruptions by the end of the century if action is not taken.

The consensus is near universal among climate scientists. Since the beginning of the industrial age, human activity—in particular, the burning of fossil fuels—has increased the concentration of carbon dioxide and other greenhouse gases in the atmosphere. Prior to the last century, the parts per million of carbon dioxide in the atmosphere varied between 180 and 280 ppm, never exceeding 300 ppm. In 2013, carbon dioxide concentration passed 400 ppm and continues to grow unabated.4 This increased concentration precipitates the greenhouse effect, by which these gases trap solar radiation coming to earth from the sun, leading to global warming and changing the climate in regions throughout the world.

The implications are dire. Warming threatens to increase desertification in some regions and multiply the number of days of life-threatening heat waves around the globe. Warmer air holds more moisture, raising the risk of extreme weather events such as hurricanes and floods. Warming leads to thermal expansion of the ocean and the melting of landlocked water on glaciers and the vast ice sheets of Antarctica and Greenland which together leads to rising sea levels. Warming increases the risks of diseases and pests that threaten trees, crops, and human health.

The direst impacts to our quality of life are likely to be economic and sociopolitical. Imagine the disruption to supply chains and the flow of goods as extreme weather interferes with manufacturing operations, shipping lanes, and trade routes. Imagine the destabilizing impacts on governments of a refugee crisis created by the displacement of millions due to rising sea levels. Imagine the wars that might erupt as precious commodities such as potable water become scarcer in certain parts of the world. Imagine the rise of nationalist governments that try to protect their own in a world of rising climate crisis.

These outcomes are not that hard to imagine. Some have argued that the emergence of the Arab Spring and consequent civil war in Syria began when bread and other food prices skyrocketed in the face of increased droughts in the region that limited the supply of grain. The war led to a refugee crisis that spread to Europe in the summer of 2016, resulting in a battle over immigration policy and leading to the rise of several nationalist political movements that threatened well-established democratic institutions. There is a reason why the US military views climate change as one of the greatest geopolitical risks of the foreseeable future.5

To help mitigate the worst impacts of climate change, scientists have argued that we should try to limit global warming to 1.5 degrees Celsius. To do so will not be easy. From 1750, at the dawn of the Industrial Revolution, to 2014, we emitted approximately 545 gigatons of carbon equivalents into the atmosphere.6 In 2019 alone, we produced 9.5 gigatons of CO2 globally.7 Despite global efforts to reduce greenhouse gas emissions in the past decade, emissions continue to rise. While there are a number of natural processes that absorb carbon dioxide and offset our emissions, including oceanic and terrestrial sinks, the average net release of greenhouse gases over the last ten years was 4.9 gigatons of carbon (GtC) per year.8

Clearly, our annual carbon emissions far outstrip the earth’s natural capacity for absorbing those emissions. As a result, we continue to spend our “carbon budget”—the amount of emissions before significant warming is unavoidable. The best estimates suggest that we must hold CO2 concentrations below 430 ppm to limit warming to 1.5 degrees Celsius.9 The International Panel on Climate Change (IPCC), the United Nations body for assessing the science related to climate change, estimated in 2018 that we had a remaining carbon budget of 118 GtC to have a 66 percent chance to keep concentrations below that target.10 Once that budget is spent, we will have to reduce annual global net emissions to zero from that point forward.

Net-zero emissions could be achieved either by reducing our greenhouse gas emissions or by increasing carbon sinks to absorb emitted carbon dioxide (or some combination of both). This book follows the lead of others and refers to the process of achieving net-zero emissions of greenhouse gases as “decarbonization.” Given our remaining carbon budget and the rate we are spending it, it is hard to avoid having to decarbonize the global economy by some point in the not too distant future.

On our current trajectory, with greenhouse gas emissions increasing roughly 0.5 percent per year, we will spend our carbon budget by the year 2040 if not sooner. Global economic downturns, such as the pandemic-induced downturn in 2020, only give us a temporary reprieve from emissions, pushing out the date only a year or two. Assuming that efforts are made to change our current trajectory, the budget can be stretched out further. In 2018, the Center for Climate and Energy Solutions (C2ES), in partnership with the RAND Corporation and the Joint Global Change Research Institute, released a report looking at scenarios to get us to decarbonization by 2050. The IPCC has targeted 2050 for decarbonization as well.

Figure 1.1 shows what a path to 2050 may look like. Starting in 2021, we will need to begin significantly reducing global emissions. The longer we delay significant emissions reductions, the sooner our “net zero” date arrives. If annual emissions continue to increase over the next few years, our day of reckoning may come as soon as 2035. What is clear is that we need to significantly change the trajectory of global emissions and to do so quickly. The next decade is absolutely critical.

Some argue that the time to mitigate climate change has passed. Decarbonizing the global economy by 2050 is darn near impossible. We will never achieve the Paris Accord target to limit global warming to 2 degrees Celsius, let alone 1.5 degrees. We must own up to this fact and focus on adaptation not mitigation. We must prepare for sea level rise that will swamp many existing cities. In some cases, this will require massive infrastructure investments in sea walls to try to hold the ocean at bay. In many cases, this will lead to evacuating and abandoning cities and regions deemed too difficult, or expensive, to save.

Yet while adaptation will most certainly be necessary, mitigation is still imperative. For if we fail to eliminate greenhouse gas emissions, increasing concentrations in the atmosphere will only accelerate and intensify the impacts of climate change. While there remains much uncertainty about the impacts on climate as greenhouse gas concentrations increase, climate scientists believe that the impacts are likely to be nonlinear with concentrations. This means the impacts could be orders of magnitude greater than under the 2 degrees Celsius scenario. Consider in the extreme, if all glacial ice and ice sheets melted, sea levels would rise by over two hundred feet, swamping millions of acres of land and displacing much of the world’s population.

While decarbonizing the global economy by 2050 is daunting, it remains necessary.

5. “Response to Congressional Inquiry on National Security Implications of Climate-Related Risks and a Changing Climate,” US Department of Defense, RefID: 8–6475571, May 22, 2015, https://archive.defense.gov/ pubs/150724-congressional-report-on-national-implications-of-climate-change.pdf?source=govdelivery.