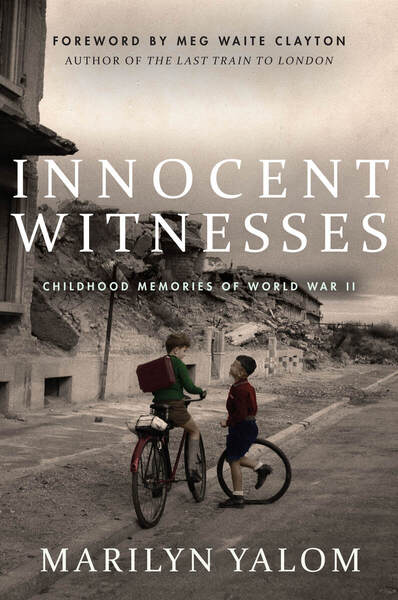 I BELONG TO A GENERATION of people who were children during World War II. Whether living in the United States like me, or in Europe like some of the friends I acquired later in life, we all carry permanent memories of the years between 1939 and 1945. To this day, despite subsequent U.S. military interventions into Korea, Vietnam, Iraq, Afghanistan, and elsewhere, World War II remains “our” war.

This book is an effort to understand the effects of that wartime experience on children living in Europe and the United States. It is based exclusively on first-person accounts recorded by people I have known closely as adults, and on decades-long conversations with them. I could not have known these individuals when we were children during the war, but even then their experiences, as I imagined them, affected my inner world, and later I went in search of their stories.

Each of these stories presents a micro-history of World War II as filtered through a child’s sensibility, and each draws us into the world of a particular child. Of course, I knew each of these wartime witnesses only as adults and must rely on their retrospective accounts as they remembered them. Yet, despite the hazards of memory, which I shall discuss in this book’s epilogue, I came to trust the essence of their accounts. Children’s eyes take in the everyday workings of war, and when reopened through memory, help the rest of us witness war’s brutal realities.

Certainly, there have been many other books presenting the experience of wartime children. I am thinking particularly of Svetlana Alexievich’s brilliant Last Witnesses: An Oral History of the Children of World War II, first published in Russian in 1985 but not translated into English until 2019. Last Witnesses is comprised of about one hundred short statements by Russian children, each remembering the cruelty of German invaders who did not spare their fathers, mothers, or even their fellow children when it suited Nazi aims. One comes away from this book with an overwhelming sense of suffering, a children’s tragic chorus on an epic scale.

My book does not pretend to such dimensions. Rather, it offers a smaller number of rich, intimate accounts, through which we see deeply into the experience of children trying to grow up and understand the world around them, just as their families and countries are scrambling to survive. In addition to my own story, it offers the histories of six people whom I came to know as colleagues and friends, each of whom has written a revealing and compelling memoir. Let me introduce you to each of the authors, whose memoirs you will read in this same order.

Alain Briottet was born into a middle-class family living in Paris. His father, an educator and a reserve officer in the French army, was taken prisoner by the Germans in 1940, incarcerated in Pomerania (then part of Germany, now in Poland), and not released until 1945. Alain’s memoir, Sine Die (published in French, Éditions Illador, 2016), describes how his family fled to a village in central France during his father’s imprisonment, how his mother participated in the Resistance, and how they survived with great hardship under the collaborationist Vichy regime. A portion of his book is published here in my translation.

Philippe Martial was a young boy of five when the war started, and he spent the war years living in Normandy with his maternal grandparents. His father had died just before the start of the war, in 1939, while serving as a French army medical officer in French Somaliland. His death left his widowed wife with three small children, Philippe and his younger twin sisters. In Normandy under German occupation, they suffered the common deprivations of war—cold and hunger—and the insults of the local children, who had never seen others with dark skin and frizzy hair. Philippe’s account includes memories of German soldiers billeted upon his family, terrifying bombardments, and the exhilarating liberation of the village by American soldiers. In his eighties, Philippe wrote a short memoir of the war years, which I have translated from the original French into English for this book.

Winfried Weiss was born into a modest German Catholic family from Bavaria. His father, a policeman, was a member of the Nazi party who disappeared on the Russian front in November 1943, just after Winfried’s sixth birthday. Until that time, Winfried remembered a happy childhood in a community of like-minded individuals, all fully committed to Hitler, all enemies of France, Britain, and the United States, and all contemptuous of Jews. Many years after we met, I helped Winfried write and publish A Nazi Childhood (Capra Press, 1983 and Mosaic Press, 2010), a lyrical literary memoir deemed “shocking” when reviewed by Nobel laureate Doris Lessing. His story offers us entrée into a world that is both foreign and familiar, inviting and, yes, shocking.

Stina Katchadourian was born into the Swedish-speaking minority of Finland in 1937. Her father had a stable position in the Finnish forest industry when he was called up for military service in 1939. He spent the next six years defending Finland against Russian aggression. While her father was away, her mother moved the family around the country as far north as Lapland and then eventually to Sweden. Those turbulent years are vividly described in Stina’s memoir, The Lapp King’s Daughter (Fithian Press, 2010).

Susan Groag Bell came from an affluent family in the Czech city of Troppau. Though her parents were Jewish by birth, she had been baptized and raised as a Lutheran. This did not protect her from being dismissed from school as a Jew after the German takeover of Czechoslovakia in 1938. The following year, she fled with her mother from Czechoslovakia to England, where her mother found employment as a housekeeper and Susan was accepted gratis into a private girls’ school. Her lawyer father, who stayed behind, became a victim of the Holocaust. Susan credited my “editorial pencil” with helping her to improve her account of that time, which was published as Between Worlds: In Czechoslovakia, England, and America (Dutton, 1991), and from which I’ve excerpted the narrative contained here.

Robert Berger was separated from his parents by the Nazis when he was a teenager. As a Jewish boy in Hungary posing as a Christian, he witnessed atrocities that would haunt him for the rest of his life. He and my husband, Irvin Yalom, became friends in medical school, and many years later, they co-wrote I’m Calling the Police (Basic Books, Kindle, 2011), which evokes the tragedies of Berger’s adolescence. A shortened version of that work appears here.

Surprisingly few of these childhood stories focus exclusively on the terrors of war. As we were children, we also went on with our innocent lives, enjoying the pleasures of family and friends and routine activities. Wherever we were, we found ways to think of our situations as “normal”—at least until some overwhelming catastrophe destroyed even that illusion.

Children remember what they ate, and what they didn’t eat, and especially the torments of hunger, and the selfishness of individuals who begrudged them their food. They remember the unexpected kindness of strangers who took them into their homes, and the freezing cold of unheated rooms. They remember a rare toy given to them on their birthday or at Christmas. They remember their play with other children, some of whom disappeared from their lives due to displacement or death. They remember the sound of sirens and explosions and the bright flares that illuminated the night sky.

Unlike people who were adults during the war, innocent children do not have to justify their actions in their later accounts. They were not responsible for the atrocities that war had visited upon them and on the millions of others whose lives were maimed or cut short. Rather, they were caught up in the events around them, trying to grow and discover the world during extraordinary circumstances, which often felt ordinary, if not pleasant. Reading their accounts, we learn a great deal about what it is to be human, without the lenses of geopolitical history or moral outrage through which we ourselves, looking back, might view these events.

Since their accounts were written later in their lives, the authors presented here all have an eye to the storytelling devices that compel readers. The selections I have chosen from their memoirs lay out their stories as clearly as possible, often with the child and adult perspectives intertwining to create a rich, multilayered voice that neither would offer alone.

I came to know all these children personally after they had grown up, and I have marveled at their ability to transcend the past and become thoughtful and accomplished adults. From their memoirs, it is possible to speculate on the circumstances that helped them survive. Which adult figures representing safety and hope guided them through the worst of times? What personal qualities helped them become functioning adults? How did they deal with their traumatic wartime memories? These are questions I shall address at the end of the book.

Now that several of these people have passed away and since the rest of us will undoubtedly be gone in the near future, I feel a special obligation to communicate their stories. The wartime memories conveyed in this book come from friends who spent their childhood years in France, Germany, Hungary, Czechoslovakia, England, Finland, Sweden, Norway, and the Netherlands. In addition to their recollections, I add my own wartime memories—those of an American girl safely protected in Washington, DC, while bombs dropped on my counterparts abroad.

We are the last individuals who can remember World War II, and before long we shall all vanish. I leave behind this testimonial in the hope that our stories will alert others, once more, to the senseless tragedies of war. Given the present historical moment, with its rising tide of nationalism and escalating conflicts, these stories may serve as cautionary tales, forcing us to ask whether our children and grandchildren will also be the victims of power-hungry adults. Must children continue to lose their soldier fathers and, now, their soldier mothers as well? How many will be displaced from their homelands in this age of refugees? How many will be separated from their families and placed in camps on the borders of the countries in which they seek refuge? How many will be persecuted because of their skin color? How many will be forced to suffer hunger, cold, bodily injury, and death?