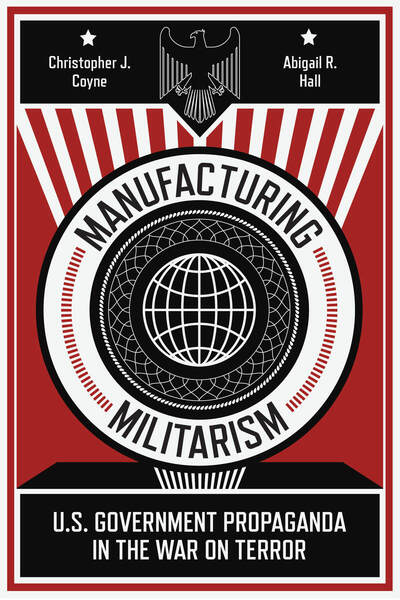 Its Meaning, Operation, and Limits

Since America’s earliest days, war and propaganda have been intimately connected. Before the Revolutionary War, propaganda was used to shape public opinion in order to unite the colonists against the British. Among the most famous propaganda pieces from this time period is Paul Revere’s 1770 engraving titled “The Bloody Massacre Perpetrated in King Street,” which depicted events from the Boston Massacre and was intended to galvanize support against the British. The engraving shows British Captain Thomas Preston standing behind an orderly line of seven Red Coats with his sword raised to indicate an order to fire at the colonists standing before them. The colonists are depicted with looks of fear and sadness on their faces, some lying on the ground in pools of blood. The British soldiers, in contrast, are depicted as enjoying inflicting harm on the colonists.

The image was meant to present the British as the violent aggressors against the passive colonists. Moreover, the massacre was presented as a coordinated and planned effort carried out by the British soldiers at the superior officer’s order. In reality, the Boston Massacre began as a disorderly street fight between American colonists and a single British soldier who called for reinforcements. The situation escalated into bloodshed after colonists antagonized and assaulted the soldiers. A soldier fired into the crowd, and several other soldiers followed suit, killing five colonists and wounding several others. However, there is no formal evidence that Captain Preston ever ordered his men to fire, and all but two of the men involved were acquitted of any wrongdoing. While Revere’s engraving misrepresented the realities of the events surrounding the Boston Massacre, it had the desired effect of rousing anti-British sentiments among the colonists.

Propaganda appeared throughout the revolutionary period and was used during the American Civil War. While the specific content varied, the defining feature of propaganda during this period was that it was highly decentralized. There was no coordinated government effort to develop and disseminate propaganda. Instead, propaganda was produced by a variety of government and private organizations in an uncoordinated and ad hoc manner.1 This changed during the world wars, when propaganda became an institutionalized aspect of the U.S. government’s arsenal.

Soon after entering World War I, President Woodrow Wilson signed Executive Order 2594 on April 13, 1917, which established the Committee on Public Information (CPI), also known as the Creel committee. The purpose of the CPI was to systematically influence domestic public opinion in support of the U.S. government’s participation in World War I.2 The reach of the CPI spanned numerous media outlets, including newspapers, movies, radio, posters, and short four-minute public talks by trained volunteer orators—the “Four Minute Men.” Its purpose was to frame conscription, economic rationing, war bonds, victory gardens, and other wartime measures in a positive light with the aim of convincing citizens that the various aspects of the government’s war effort, and the sacrifice they entailed, were crucial to the maintenance and extension of America’s core principles.3

The CPI was officially disbanded by executive order in August 1919. A growing backlash against its operations led many in government to make public claims about abandoning the use of war propaganda in the future. This criticism was short lived, however, with the onset of World War II. Over the course of the war, a multipronged apparatus disseminated government-approved information despite an official policy indicating that the government was not to issue propaganda.

On June 13, 1942, President Franklin D. Roosevelt signed Executive Order 9182, which authorized the Office of War Information (OWI).4 The purpose of the OWI was to consolidate and distill information related to the war effort. Specifically, the executive order declared that the OWI should “formulate and carry out, through the use of press, radio, motion picture, and other facilities, information programs designed to facilitate the development of an informed and intelligent understanding, at home and abroad, of the status and progress of the war effort and of the war policies, activities, and aims of the Government.”5 The OWI, which was split into domestic and international branches, had near monopoly control over the dissemination of war-related information. Through its various operations, the OWI sought not just to provide information to American citizens but to do so in a manner that would encourage public support for the government’s war activities.

A separate but related part of the wartime propaganda apparatus was the Writer’s War Board (WWB), established in December 1941 at the urging of the U.S. Treasury Department. The board was privately organized and operated, meaning it did not have a formal government budget (although the government subsidized the writer’s offices and staff). This private civilian status, however, should not be mistaken for independence from government influence. The WWB operated through the OWI and served as a “liaison between American writers and U.S. government agencies seeking written work that will directly or indirectly help win the war.”6 Indeed, the WWB “received governmental funding and functioned, according to one member, as ‘an arm of the government.’”7 In total, the WWB leveraged the skills of around five thousand writers who sought to influence public opinion through a wide range of media outlets, including newspapers, magazines, books, and radio.8

The operations of the OWI and WWB were complemented by other government-sponsored propaganda. For example, the U.S. government commissioned Academy Award–winning filmmaker Frank Capra to direct a series of documentaries, under the general title Why We Fight, to justify America’s involvement in the war to soldiers and the general public. Following the end of World War II, the operations of the OWI and WWB ceased. But that was not the end of U.S. government propaganda.

In 1948 Congress passed the U.S. Information and Educational Exchange Act (Public Law 80-402), also known as the Smith-Mundt Act, which institutionalized the U.S. government’s foreign propaganda efforts, including Voice of America, the largest U.S. international multimedia broadcasting institution. Those concerned with the negative consequences of government propaganda were partially placated by the insertion of a stipulation in the bill that information produced for foreign broadcast was not to be disseminated domestically.

During the Cold War and the Vietnam War the U.S. government operated, and publicly acknowledged, the United States Information Agency (USIA), which was established in 1953 by order of President Eisenhower. The mission of the USIA was “to understand, inform and influence foreign publics in promotion of the national interest, and to broaden the dialogue between Americans and U.S. institutions, and their counterparts abroad.”9 The activities of the USIA were split into four categories. The first dealt with the dissemination of information including taking over the operations of the Voice of America program, that had been approved as part of the aforementioned Smith-Mundt Act. The second dealt with exhibits and cultural products, and the third focused on the publication of print media. The final division focused on motion pictures. The activities of the USIA were subject to the ban on domestic dissemination established under the Smith-Mundt Act. This, however, is not meant to suggest that there was no domestic government propaganda.

Starting in the early 1950s, the U.S. government, under the auspices of the Central Intelligence Agency (CIA), began Operation Mockingbird. This large-scale international initiative recruited leading journalists and reporters to serve as spies and to actively disseminate propaganda in support of the American government’s anticommunist efforts at home and abroad.>10

The reach of Operation Mockingbird was extensive, with connections in at least twenty-five American news outlets and wire agencies—including the New York Times, the Washington Post, and Time magazine—and control over fifty foreign newspapers.11 The program also sought to influence the content of commercial film productions. Operation Mockingbird was a covert operation, meaning that it was not subject to congressional oversight. Similarly, members of the public were unaware of its operations until a series of reports starting in the late 1960s revealed the government’s secretive propaganda efforts to manipulate public opinion.

Also during this time, the Department of Defense (DOD) engaged in a wide range of domestic propaganda activities under the guise of “public relations,” including such things as locating news crews in Southeast Asia to produce newsreels for distribution in the United States, a domestic speakers bureau to facilitate speeches by military and civilian officers in support of the war effort, a publications division to assist with the creation and dissemination of pro-military materials written by members of the armed forces, and a “Projects Division” responsible for providing and coordinating military-related personnel for public events, such as fairs and parades.12 The DOD also ran programs for American civilians to tour and actively participate in interactive demonstrations at its facilities with the aim of connecting with the general public to foster support. The agency also held “freedom forums” throughout the country to “educate” the public regarding threats and U.S. war efforts to address them.13

The propaganda activities of the DOD were unchecked by Congress and not subject to the stipulations of the Smith-Mundt Act banning the domestic dissemination of propaganda. As Senator William Fulbright wrote,

It is interesting to compare [the] American government’s only official propaganda organization, the U.S. Information Agency with the Defense Department’s apparatus. USIA is so circumscribed by Congress that it cannot, with the rarest of exceptions, distribute its materials within this country. . . . But the Department of Defense, with more than twice as many people engaged in public relations as USIA has in all its posts abroad, operates to distribute its propaganda within this country and without control other than the executive, and floods the domestic scene with its special, narrow view of the military establishment and its role in the world.14

It was this expansive, institutionalized propaganda apparatus that so concerned Fulbright. His concerns remain relevant, as what he called the “Pentagon propaganda machine” is alive and flourishing.

A recent report by American Transparency found that over the seven-year period from 2007 to 2014, the U.S. government spent over $4.3 billion on public relations.15 Further, the report indicates that, based on the number of employees, the U.S. government is the second largest PR firm on the globe. Of the ten federal agencies who spend the most on external PR services, the Army ranked second, spending $255 million, and the Department of the Navy ranked seventh, spending some $80 million. The Department of Veterans Affairs, Department of the Air Force, U.S. Coast Guard, and the Missile Defense Agency also ranked in the top fifty contracting agencies.16

While the specific details regarding how this money was spent are not publicly known, what is clear is that the U.S. government continues to spend a significant amount of taxpayer dollars promoting itself to the American public. In addition, as we will discuss throughout this book, the U.S. government’s approach satisfies the distinctive features of the “firehose of falsehood” model of propaganda. This approach consists of a “high numbers of channels and messages and a shameless willingness to disseminate partial truths or outright fictions.”17 As such, Senator Fulbright’s concern that few Americans “have much cognizance of the extent of the military sell or its effects on their lives” remains as valid today as when first raised decades ago.18

2. For a firsthand account of the operation of the CPE, see Creel 1920.

10. See Wilford (2009) for a discussion of the history and activities of Operation Mockingbird.

17. Paul and Matthews 2016. The authors limit their discussion of the “firehose of falsehood” model to Russian propaganda internationally. But the same characteristics they highlight as part of this model also apply to the U.S. government domestically and abroad.