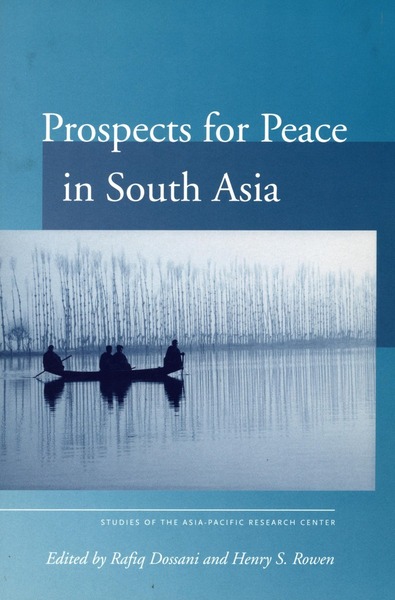 PROSPECTS FOR PEACE IN SOUTH ASIA

Rafiq Dossani, Senior Research Scholar at Stanford University's Asia-Pacific Research Center (A-PARC), responsible for developing and directing the South Asia Initiative.  Research interests: Domestic politics and security policy interactions in South Asia, technology policy and the globalization of business services.  His most recent book is Telecommunications Reform in India.  Dossani serves as an advisor to the Indian Ministry of Information Technology and the Pakistan Telecommunications Authority.  Dr. Dossani has a Ph.D. in Finance from Northwestern University.

Henry S. Rowen, Director Emeritus of A-PARC.  He is a senior fellow at the Hoover Institution and a professor of public policy and management emeritus at Stanford's Graduate School of Business.  Rowen was assistant secretary of defense for international security affairs in the U.S. Department of Defense from 1989 to 1991.  He was also chairman of the National Intelligence Council from 1981 to 1983.  He served as president of the RAND Corporation from 1968 to 1972 and was assistant director, U.S. Bureau of the Budget, from 1965 to 1966.

His current research focuses on economic growth prospects for the developing world, political and economic change in East Asia, and the tenets of federalism.  He recently wrote "Catch Up. Why Poor Countries are Becoming Richer, Democratic, Increasingly Peaceable, and Sometimes More Dangerous," published in August 1999 by A-PARC, and co-authored "Cool on Global Warming" with John Weyant for The National Interest (Fall 1999).  He is the editor of Behind East Asian Growth: The Political and Social Foundations of Prosperity.  Among his numerous publications, his other noteworthy writings include "The Short March: China's Road to Democracy," The National Interest (Fall 1996); "Inchon in the Desert: My Rejected Plan" The National Interest (Summer 1995); "The Tide Underneath the 'Third Wave'" Journal of Democracy (January 1995); The Impoverished Superpower: Perestroika and the Soviet Military Burden (1990), co-edited with Charles Wolf, and The Future of the Soviet Empire (1987), also co-edited with Charles Wolf.

Chandrashekhar Dasgupta, Distinguished Fellow at the Observer Research Foundation, New Delhi.  Dasgupta was a member of the Indian Foreign Service from 1962 to 2000, serving as ambassador/high commissioner to the European Union, Belgium, and Luxembourg (1996-2000); China (1993-96); Tanzania (1984-86); and Singapore (1981-84).  Research interests: security policy in South Asia.  Publications: War and Diplomacy in Kashmir, 1947-48.

C. Christine Fair, at the time of writing was a political scientist at RAND.  At present she is a senior South Asia analyst at the United States Institute of Peace.  Dr. Fair has accumulated several years living, working, and conducting research in Pakistan, India, as well as Sri Lanka and Nepal.  At USIP she is working on a number of projects that seek to expose the roots and sources of militant Islam in Pakistan, including a critical translation of major publications of Jaish-e-Mohammad and Lashkar-e-Taiba.  She holds an MA in Public Policy and a Ph.D. in South Asian Languages and Civilizations, both from the University of Chicago.

Robert L. Hardgrave, Jr., Temple Professor Emeritus of the Humanities in Government and Asian Studies at the University of Texas at Austin.  He is a specialist in the domestic and international politics of South Asia.  Publications (books): The Dravidian Movement; The Nadars of Tamilnad: The Political Culture of a Community in Change; India Under Pressure: Prospects for Political Stability; and (with Stanley A. Kochanek) India: Government and Politics in a Developing Nation, now in its 6th edition.

Syed Rifaat Hussain, Chairman of the Department of Defense and Strategic Studies (DSS) at Quaid-I-Azam University in Islamabad, Pakistan.  He also served as the Minister of Information at the Embassy of Pakistan in Washington, D.C. from 1994-1997.  He has a Ph.D. in International Studies from the University of Denver.

Charles H. Kenendy, is a Professor of Political Science at Wake Forest University.  He received his Ph.D. from Duke University in 1979.  Professor Kennedy has written about South Asian comparative political and governmental systems since 1975, and has authored, co-authored, or edited sixteen books, which deal with South Asia.  His most recent include Pakistan: 2004, Pakistan at the Millennium, and Government and Politics in South Asia 5th edition.

Peter Lavoy, Director of the Center for Contemporary Conflict at the Naval Postgraduate School, Monterey.  Publications: Planning the Unthinkable: How New Powers Will Use Nuclear, Biological and Chemical Weapons.  His next books are Learning to Live with the Bomb: India, the United States and the Myths of Nuclear Security and Asymmetric Warfare in South Asia: The Causes and Consequences of the Kargil Conflict.  He is on the editorial board of Asian Security and Defense Studies.  He has a Ph.D. in Political Science from the University of California, Berkeley.

Barbara D. Metcalf, Professor of History at the University of Michigan.  Research interest: History of South Asian Muslims.  Recent publications (books): Islamic Contestations: Essays on Muslims in India and Pakistan; (co-authored) A Concise History of India, Islamic Revival in British India: Deoband, 1860-1900.  She has a Ph.D. from the Department of South and Southeast Asian Studies, University of California, Berkeley.

Vali Nasr, Professor, Department of National Security Affairs at the Naval Postgraduate School, Monterey.  Research interest: Political Islam and Middle Eastern and South Asian politics.  Recent publications (books): The Islamic Leviathan: Islam and the Making of State Power, The Vanguard of the Islamic Revolution: the Jama'at-I Islami of Pakistan, and Mawdudi and the Making of Islamic Revivalism.

Howard B. Schaffer, Director of Studies and Deputy Director, Institute for the Study of Diplomacy, Edmund A. Walsh School of Foreign Service, Georgetown University.  Earlier he worked as a U.S. Foreign Service officer, served as U.S. ambassador to Bangladesh, political counselor in India and Pakistan, and deputy assistant secretary of state responsible for South Asian affairs.  Publications (books, both biographies): Chester Bowles: New Dealer in the Cold War; Ellsworth Bunker: Global Troubleshooter, Vietnam Hawk.  He has a B.A. from Harvard College and has done graduate work at Columbia and Princeton.

Karthik Vaidyanathan is a graduate student at the University of California at San Diego.  Previously, he was a research assistant at RAND.