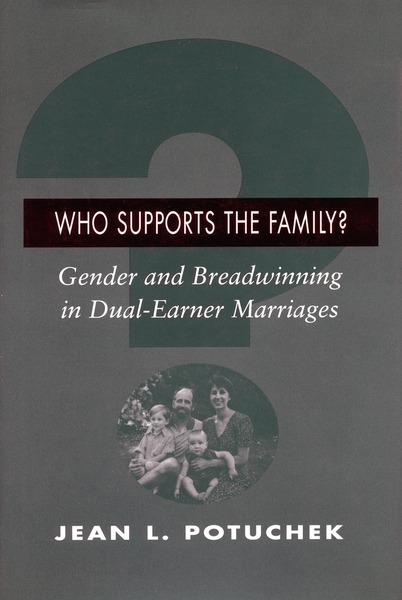 Who Supports the Family?
Gender and Breadwinning in Dual-Earner Marriages
Jean L. Potuchek

In a dual-earner marriage, why is a wife’ s paid employment much less likely to be defined as "breadwinning" than her husband’s? This book uses data from a study of 153 dual-earner couples to examine the allocation of responsibility for breadwinning and the social construction of gender in their marriages.

The author carefully distinguishes breadwinning from paid employment and uses the insights of gender construction theory to illuminate that distinction. Gender construction theory sees gender as a system of social relations that is continually and actively created in the social interactions of daily life. Using both quantitative and qualitative analyses, this book demonstrates that despite the prevalence of dual-earner marriages, breadwinning is still widely used as a boundary that creates gender by distinguishing the meaning of men's employment from that of women's.

The author argues that though the extent to which breadwinning is used as a gender boundary is strongly influenced by adult experiences and circumstances and by the material conditions of couples' lives, it is not determined by these factors. Rather, the meanings attached to husbands’ and wives’ employment are actively constructed through a process of negotiation that is characterized by both contention and cooperation. Moreover, this is a highly dynamic process; the breadwinning boundary is renegotiated and reconstructed in response to disagreement, to changing circumstances, and to shifts in other, related gender boundaries.

Through its detailed analysis of breadwinning and its development of gender boundaries as a theoretical concept, this book provides new insight into gender relations and makes a contribution to gender construction theory. At the same time, it is engagingly written and provides moving glimpses of the real-life dilemmas of dual-earner couples.