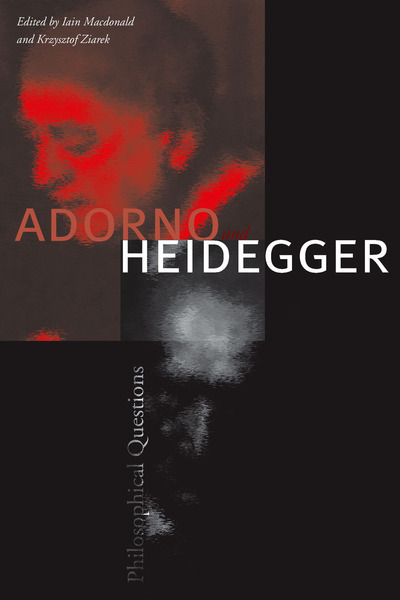 Adorno and Heidegger explores the conflictual history of two important traditions of twentieth-century European thought: the critical theory of Theodor W. Adorno and the ontology of Martin Heidegger. As is well known, there has been little productive engagement between these two schools of thought, in large measure due to Adorno's sustained and unanswered critique of Heidegger. Stemming from this critique, numerous political and philosophical barriers have kept these traditions separate, such that they have rarely been submitted to scrutiny, let alone questioned. The essays making up this collection are fresh and original attempts at coming to terms with the nuances and difficulties that these two towering figures have bequeathed to the history of European thought. The volume's authors deal with a variety of issues ranging from epistemology to esthetics, to ethics, to intellectual history and modernity, providing the reader with detailed insight into a thorny debate in the history of recent European thought.

Iain Macdonald is professeur agrégé in the Department of Philosophy at the Universite de Montréal and Adjunct Professor in the Department of Philosophy at McGill University. He has published in English and French on Hegel, Adorno, and Heidegger and is currently working on a book dealing with the Adorno-Heidegger question. His research focuses on the intersection of epistemology, metaphysics and normativity.

Krzysztof Ziarek is Professor of Comparative Literature at the University at Buffalo. He is the author of Inflected Language: Toward a Hermeneutics of Nearness (1994), The Historicity of Experience: Modernity, the Avant-Garde, and the Event (2001), and The Force of Art (Stanford, 2004). He has also written two books of poetry in Polish, Zaimejlowane z Polski and Sąd dostateczny

“Partisan scholarship has perhaps made it too easy to simply separate Adorno and Heidegger, and this volume admirably makes the case that such a separation is theoretically and historically erroneous. This fine collection of essays by an important and diverse group of experts brings us to the next stage of evaluating Heidegger and Adorno’s work.” —Stephen H. Watson, University of Notre Dame

“Adorno’s polemical antagonism to Heidegger hid what now appears as a fateful proximity between their two philosophies. The drive toward concreteness, the critique of technological modernity, the critical power of art, an ethics without principles, the need for remembrance are among the philosophical tropes binding Adorno and Heidegger together. Macdonald and Ziarek have put together an exhilarating collection of essays exploring these and related topics. For the English-speaking reader, the dialogue between Adorno and Heidegger begins with this volume.” —J. M. Bernstein, New School for Social Research 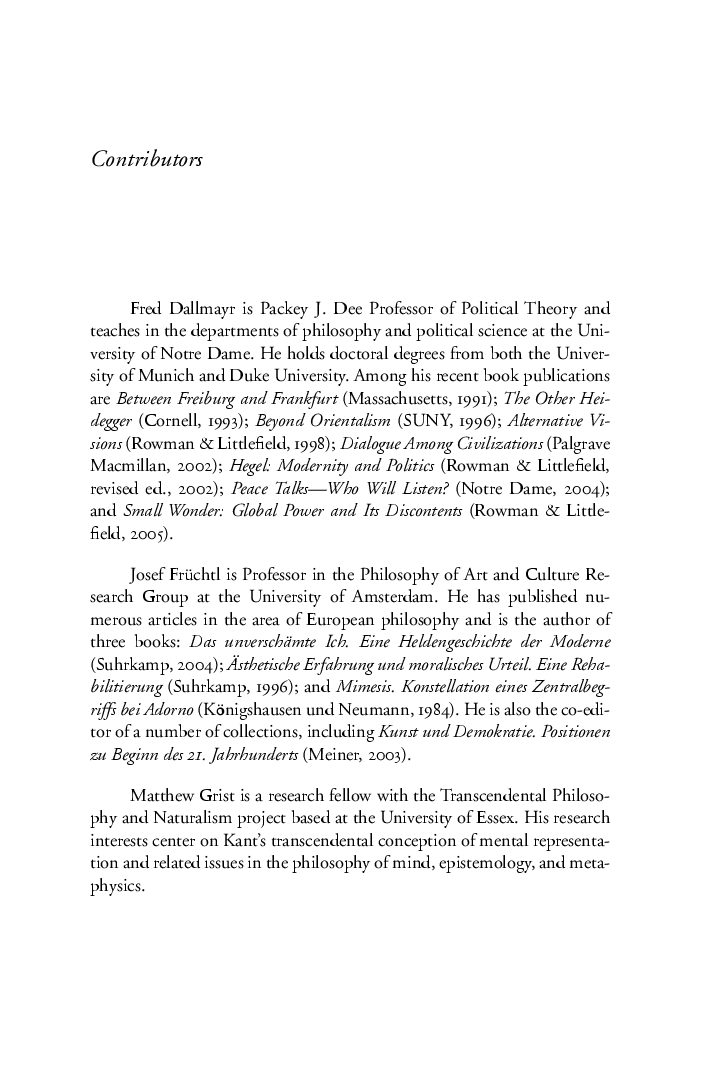 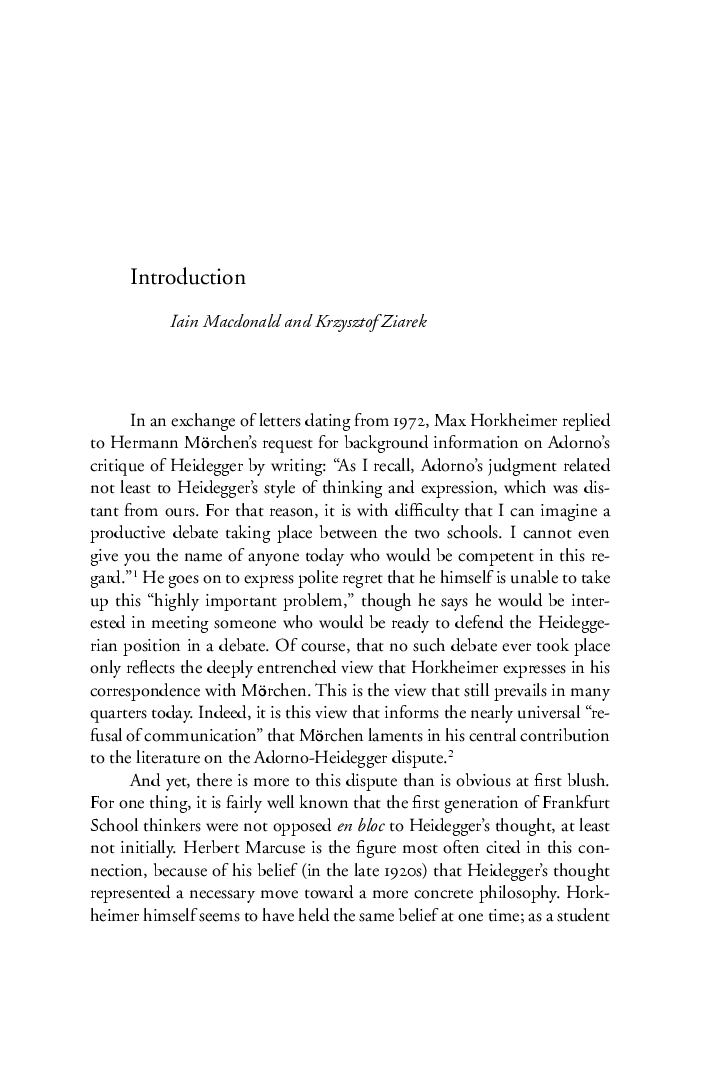 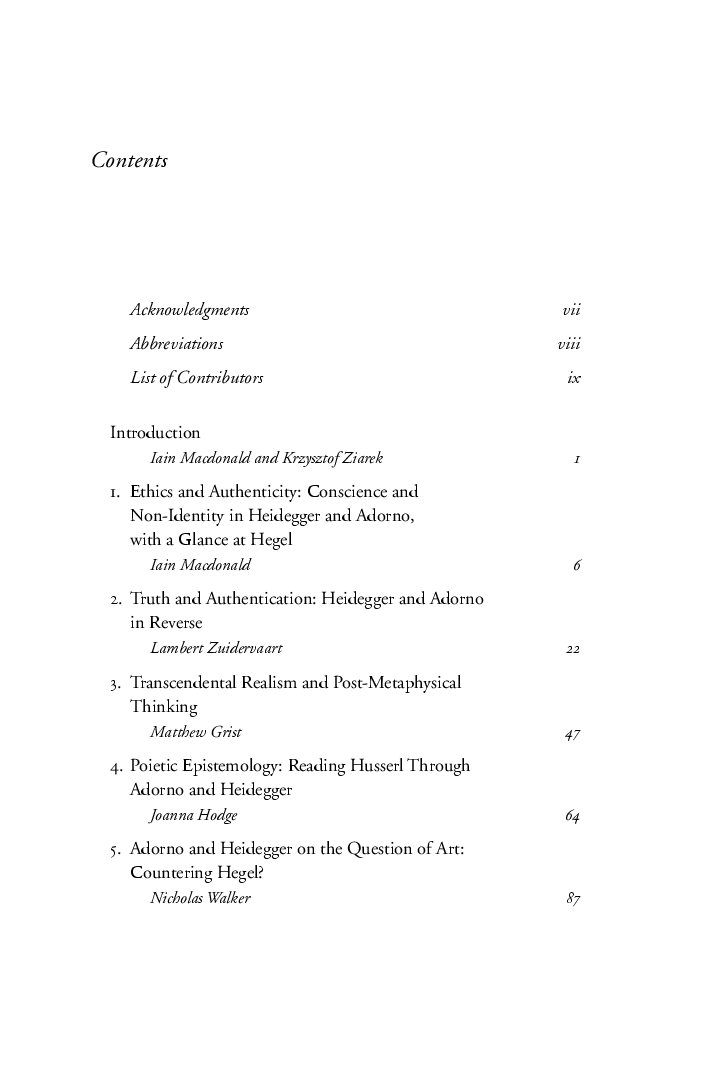