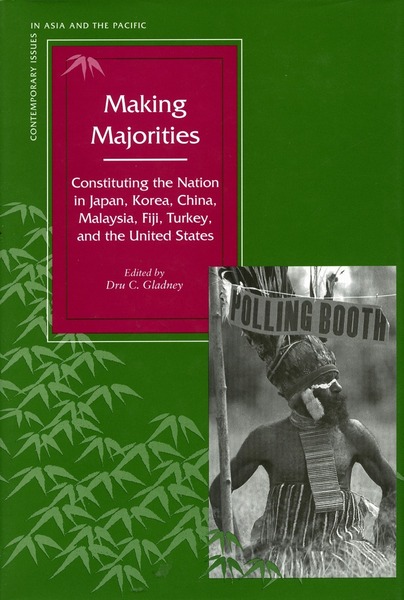 Majorities are made, not born. This book argues that there are no pure majorities in the Asia-Pacific region, broadly defined, nor in the West. Numerically, ethnically, politically, and culturally, societies make and mark their majorities under specific historical, political, and social circumstances. This position challenges Samuel Huntington’s influential thesis that civilizations are composed of more or less homogeneous cultures, suggesting instead that culture is as malleable as the politics that informs it.

The fourteen contributors to this volume argue that emphasis on minority/majority rights is based on uncritically accepted ideas of purity, numerical superiority, and social consensus. Emphases upon multiculturalism can become ways of masking serious political, ethnic, and class differences merely in terms of cultural difference, and affirmative-action policies can isolate, identify, and stigmatize minorities as often as they homogenize, unify, and naturalize majorities.

This book analyzes how minorities are made and marked across cultural, regional, and national boundaries from Hawai‘i to Turkey, a region that encompasses extraordinarily diverse populations and political developments and that is often regarded as composed of relatively homogeneous majorities.

This volume details discourses of majority and minority, allowing exploration of a number of questions of more general concern in the humanities and social sciences, including: How does one become officially “ethnic” in many states in Asia? How are understandings of majority and minority cultures created and shaped in specific political and historical contexts? How does the state shape the way people think of themselves? How do people resist, transform, and appropriate these official representations?