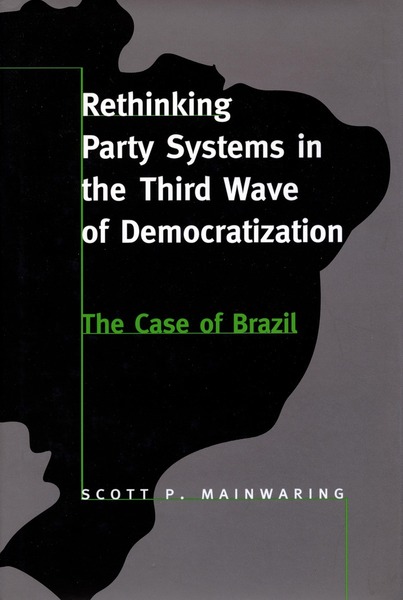 Rethinking Party Systems in the Third Wave of Democratization
The Case of Brazil
Scott P. Mainwaring

Among the many countries that underwent transitions to democracy in recent decades, only Russia is as important to the United States and the world as Brazil. The fifth-largest country and population in the world, with nearly one-half the inhabitants of Latin America, Brazil has the world’s ninth-richest economy. Given the nation’s size and influence, its capacity to achieve stable democracy and economic growth will have global impact. Understanding democracy in Brazil is therefore a crucial task, one which this book undertakes.

Theoretically, the author argues that most party systems in the third wave of democratization, after 1974, have distinctive features that require us to reformulate theories about party systems generally; previous works have paid scant attention to the importance of variance in the degree of institutionalization of party systems. The author also argues that many third-wave cases underscore the need to focus on the capacity of the state and political elites to structure and restructure party systems from below.

Empirically, the author studies the Brazilian party system and democratization, with particular reference to the 1979-96 period. He underscores the weakness of the party system and the resulting problems of democratization. He argues that the party system is poorly institutionalized, explores the reasons for the difficulties of party building, and addresses the consequences of weak institutionalization, which leads him to reaffirm the central significance of parties in the face of widespread skepticism about their importance.

Scott P. Mainwaring holds the Conley Chair of Government and is Director of the Kellogg Institute for International Studies at the University of Notre Dame. Among his recent publications is Building Democratic Institutions: Party Systems in Latin America (co-editor, Stanford, 1995).

“This is a first-rate analysis of modern Brazilian politics. . . . As Mainwaring makes clear, both theoretically and through abundant empirical evidence, the incapacity of parties to act collectively is centrally connected to the issues of presidential power, federalism, political corruption, and the progressivity of social power.”—John Carey, Washington University, St. Louis