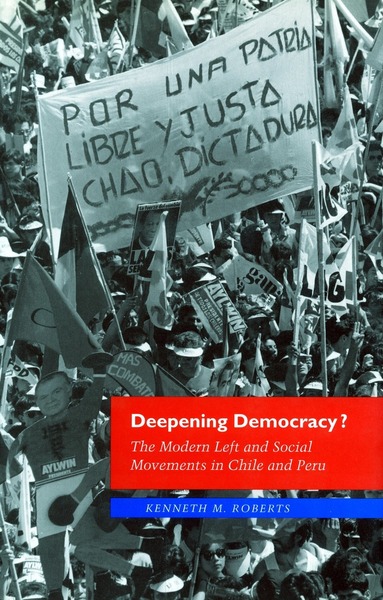 As a wave of transitions from authoritarian rule swept across Latin America in the 1980's, the idea of "deepening democracy" emerged as a guiding principle of the political Left and social movements in much of the region. With its emphasis on grass-roots participation and popular empowerment, this idea gained force among social and political actors who sought to reconcile the Left's traditional commitment to radical change with its newfound respect for representative democracy. The vision of progressive democratic reform helped revive leftist parties whose revolutionary dreams had been crushed by military repression and whose traditional political and economic models had lost appeal with the world-wide crisis of communism.

Through a comparative analysis of two very different cases, this book shows why the deepening of democracy proved so difficult to achieve in practice. Although the Chilean Left helped defeat a military dictator and form a new democratic regime in 1990, it faced great odds in promoting reforms because of the structural and institutional constraints bequeathed by the dictatorship. In Peru, a powerful leftist coalition with close links to social movements failed to build upon its success in municipal elections, and was ultimately undermined by political and economic crises that tore apart the Left's social networks.

Deepening Democracy? suggests that the new project of the Left is heavily contingent on the organization of collective actors in civil society, a process that has been disrupted by the effects of economic crises, market liberalization, and electoral competition. The book sheds new theoretical light on the structural and institutional forces that have not only hampered the political success of the Left, but also limited the scope and quality of democratic practices in contemporary Latin America. Thus, it shifts scholarly attention from the conditions for democratic transition and consolidation in Latin America to the character and consequences of democratic rule.

"Deepening Democracy is at its core a masterful explanation of the distinctive dilemmas of the Peruvian and Chilean democratic regimes in the neoliberal era."