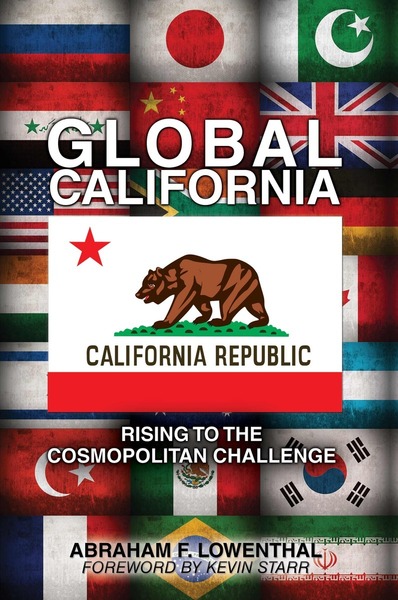 California is at the cutting edge of technological change, demographic transformation, and international engagement. It has the country's largest population, and is its biggest producer of agricultural and manufactured goods, its main exporter and importer, and a leading center for higher education, research, the media, and philanthropy. Its population is the most international; more than a quarter of the state's residents were born in another country. But habits of thought and structures date from the mid-twentieth century, when California was turned inward. California today lacks ideas, institutions, and policies commensurate with its global stakes and clout.

Global California addresses an important subject: how the citizens of a state with the dimensions and power of a nation are affected by international trends, and what they can do to identify and promote their own interests in a rapidly changing world. In this fresh, well-informed, and balanced analysis, Abraham Lowenthal deals with numerous thorny issues—from globalization, trade, and infrastructure to immigration, environmental pollution, climate change, and California's ties with neighboring Mexico and the dynamic Asian economies.

A recognized authority on foreign affairs, Lowenthal argues that the real choices are not whether to cheer globalization or condemn it. Rather, Californians need to think strategically and act effectively to gain as much as possible from international engagement while managing its risks and costs. They need to build "cosmopolitan capacity" to understand and respond to global challenges and opportunities.

Too much is at stake for California—its citizens, government, firms and non-governmental organizations—to leave thinking and acting on international affairs to the federal government and to East Coast think tank experts. This volume shows Californians how to succeed in an ever more interconnected world.

Abraham F. Lowenthal, Professor of International Relations at the University of Southern California and president emeritus of the Pacific Council on International Policy, has combined two different but intersecting careers: as a scholar who has published a dozen previous well-regarded books on Latin America and inter-American affairs and U.S. foreign policy, and as a founder of think tanks at the nexus between the worlds of ideas and actions, including the Inter-American Dialogue in Washington and the Pacific Council, a West Coast leadership forum. In this book, Lowenthal brings together his two careers to develop innovative analysis and recommendations for both policy and institutions.

"Policy-makers and opinion-shapers throughout the American West and beyond will find much of interest and importance in this engaging and innovative book."

"Informative, creative, and compelling... food for thought and ideas for action. —George P. Shultz, Former Secretary of State and Secretary of the Treasury

"Ground-breaking, timely and important Charts a way forward for cooperation between state and local officials, business and civic leaders, Congress and the new Administration."

"Carefully researched, well-written and compelling, Global California is a must-read for policymakers nationwide. There are lessons here for every state in the union."

"This original and fascinating book shows how to strengthen California's capacity to think globally and act locally."

"The center of gravity of the world economy is shifting from the Atlantic to the Pacific. Global California explains well how California is well-situated to play a leading role in the 21st century. A timely, innovative and comprehensive volume."

"California's importance and influence are routinely obscured from a distance because it is subsumed within the United States. This pioneering study serves to uncover the Golden State's true significance and distinctiveness."

—Laurence Whitehead, Official fellow in politics at Nuffield College at the University of Oxford and editor of the Oxford Studies in Democratisation series

"Policy makers, scholars and engaged citizens around the world should read this book. The forces that will most shape that future—climate change, migration, trade and outsourcing, the rise of India and China, interdependence with Mexico—uniquely affect California, and California has exceptional influence on them as well. An invaluable work."

"As a clarion call to California, it is perhaps the best I have read in three decades. It should be discussed not only in Sacramento but also in the popular press, in business and labor circles and in community organizations and educational centers."

—from the Foreword by Kevin Starr, University of Southern California and former State Librarian of California

"In this stimulating book, Lowenthal looks at California's international interests and asks what Californians can do to advance them. No secessionist, he reiterates his support for the supremacy of the federal role in foreign policy. But he points out that California, with an economy large enough to in theory earn it a place in the G-8, has serious international concerns of its own. Lowenthal identifies a range of specific interests that Californians share and proposes methods of addressing them within the current constitutional structure."

"Global California is a ground-breaking book, a key resource for policy makers and for all who want to understand global trends and how to address them proactively."

—Jon M. Huntsman, Jr., Former Governor of Utah and Ambassador to the People's Republic of China

"An eye opener should embolden Californians, and other centers of economic and political power, to be more active players"

"I highly recommend Global California as a blueprint for thought and action by business, civic and community leaders throughout our state."

"A very full account of the ways in which California, more than any other part of the United States, is linked to the global cultural, economic and transportation systems Very clearly organized and pleasantly written."

"Abraham Lowenthal's book should be required reading for the next governor of California." 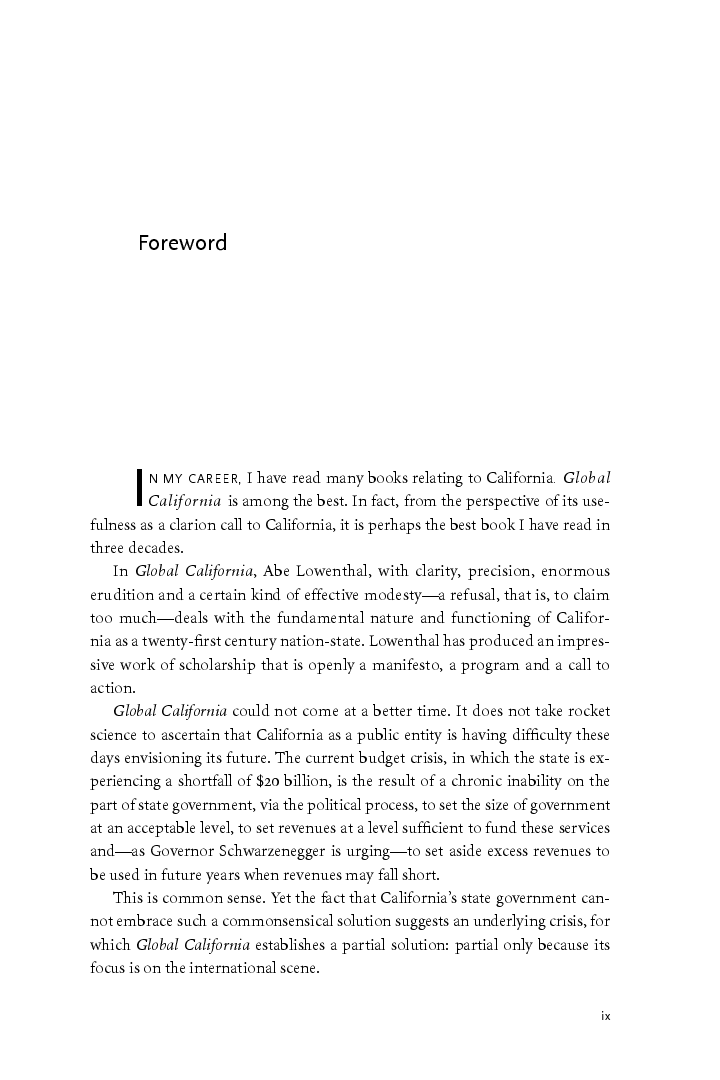 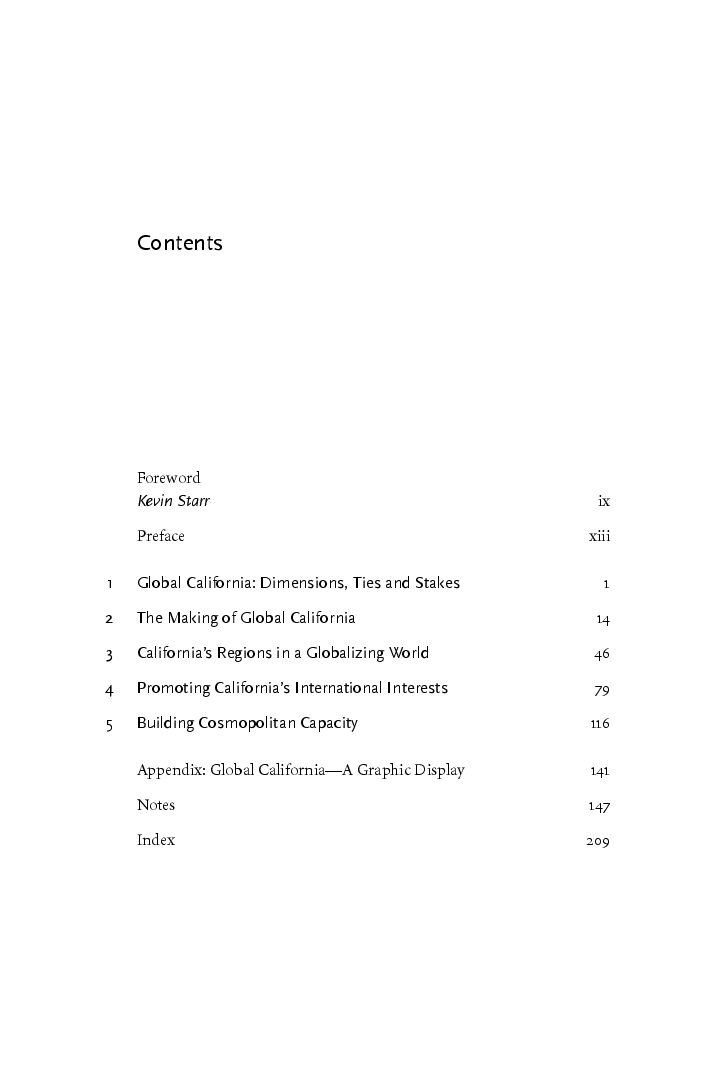