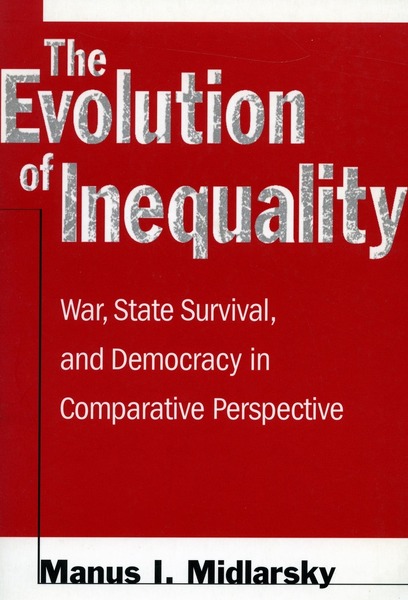 The Evolution of Inequality
War, State Survival, and Democracy in Comparative Perspective
Manus I. Midlarsky

This book studies the structural inequalities between states as they evolve and influence the political process. Through the prism of inequality, it analyzes various forms of political violence including war and revolution, the origins and dissolution of states, and the sources of cooperation between states. The ultimate genesis of democracy is shown to be a consequence of the processes detailed in the book.

Using the emergence of inequality as a theoretical wedge into the substantive material, the author develops a theoretical-probabilistic argument linking scarcity and inequality. He presents evidence for this relationship in the form of an exponentially declining probability of attaining valued commodities under conditions of scarcity. Moreover, the greater the scarcity, the more rapid the decline. This is shown to be a recipe for the emergence of inequality under conditions of scarcity and requires no assumptions beyond those of scarcity and randomness. In other words, we need make no assumption concerning human nature or structural economic relations in order to derive the existence of inequality.

"There is a lot here to sink your teeth into. This examination of inequality and how it shapes so many aspects of international relations and world politics is innovative and path-breaking."