Whether Islam is compatible with democracy is an increasingly asked question, but ultimately a misguided one. In this book, Asef Bayat proposes that democratic ideals have less to do with the essence of any religion than with how it is practiced. He offers a new approach to Islam and democracy, outlining how the social struggles of student organizations, youth and women's groups, the intelligentsia, and other social movements can make Islam democratic.

Making Islam Democratic examines in detail those social movements that have used religion to unleash social and political change, either to legitimize authoritarian rule or, in contrast, to construct an inclusive faith that embraces a democratic polity. It provides a fresh analysis of Iran's 1979 Islamic revolution—how it has evolved into the pervasive, post-Islamist reform movement of the early twenty-first century, and how it differed from Egypt's religious "passive revolution."

Focusing on events from the Iranian Revolution to the current day, with a comparative focus on Islamism, post-Islamism, and active religious expression across the region, Bayat explores the highly contested relationship between religion, politics, and the quotidian in the Middle East. His book provides an important understanding of the great anxiety of our time—the global march of "Muslim rage"—and offers a hopeful picture of a democratic Middle East.

Asef Bayat is Professor of Sociology and Middle Eastern Studies and holds the Chair of Society and Culture of the Modern Middle East at Leiden University, the Netherlands. He is the author of Life as Politics: How Ordinary People Change the Middle East (Stanford, 2009) and Street Politics: Poor People's Movements in Iran (1997).

"Asef Bayat's Making Islam Democratic deserves the close attention of social scientists working at the intersection of religion, politics, and society. Bayat's central aim is to challenge the pervasive question of whether or not Islam is compatible with democracy. Through a rich comparative study of social movements in Egypt and Iran, Bayat persuasively argues that the persistent question of Islam and democracy is one that is fundamentally misguided . . . Bayat's rich empirical analysis is among the best of recent work on social movements in the region . . . Bayat's study therefore contributes to a growing body of literature concerned with the various trajectories of Islamist movements and parties throughout the region. While most political scientists examine how political institutions shape the likely political trajectories of Islamist parties, Bayat's focus on the social trajectory of these movements provides a rich addition to the literature."

"This is an excellent political and sociological comparison between Egypt and Iran based on direct personal observation of both countries, which gives this work a subtlety and authority lacking in many academic accounts of the region . . . Bayat skillfully interweaves social, economic and political change with intellectual debate in both countries. He pays close attention to the idiom of debate on religion and politics, yet he shows successfully that Muslim politics is better understood by how Muslims practice politics than by how they define it."

"Asef Bayat is a privileged observer of two crucial arenas of Muslim politics and society. Iranian by birth and education, he lived through the 1979 Revolution and studied its politics closely. Subsequently he lived and worked in Egypt, and got to know that country intimately. Switching his focus between the two, Bayat provides a powerful contrast between different kinds of Islamic society."

"Relying mostly on experiences in Iran and Egypt and using a variety of Persian, Arabic, and Western sources, Bayat has written a masterly and intellectually challenging comparative analysis of social movements, including post-Islamic ones, and their impact on the ongoing debate over democratization in the Muslim Middle East."

"Making Islam Democratic is a breakthrough book at the level of Robert Putnam's Making Democracy Work. Part autobiographical and always incisive, Making Islam Democratic shows the opportunities and obstacles to making Islam compatible with democracy, focusing incisively on practice—how political and religious activists and thinkers in Iran and Egypt have struggled over peoples' imaginations and competed for the control of key institutions that define core social and political values. This book is a must-read for anyone concerned with the future of democracy in Muslim-majority societies."

"In a commanding and detailed overview of the contemporary Middle East, Asef Bayat provides a unique account of the region today, in terms of ideologies, social movements and state power. Almost alone amongst scholars of the region in having expertise on both Iran and the Arab world, and with a deep commitment to combining regional knowledge with social theory, Bayat has produced a work of originality and quality. His exploration of the category 'post-Islamism,' when so many in the Middle East and the West stress the impact of Islamism itself, sets this work apart from so many prevailing, repetitive and introverted, discussions of the region."

"Unquestionably the best book I have read on Islamic trends in Iran and Egypt. Bayat, combining sociological sophistication with sharply detailed observation, offers hearty fare for those who are tired of the thin gruel served up elsewhere."

"Asef Bayats lucid and authoritative study sheds much-needed light on the vexed topic of Islam and democracy. Though Bayat sees no necessary hostility between the two, Muslims in the Middle East are in practice caught between authoritarian regimes, authoritarian Islamist oppositions, and foreign military occupation. Nonetheless, focusing on Iran and Egypt, he sees grounds for hope, mainly in post-Islamist social movements which may establish a presence in civil society sufficient to force concessions from the regimes. Since their problems have recently become our problems too, this excellent book should be very widely read."

"Bayat offers a new approach to the study of Islam and democracy by asking how social movements such as students' and women's groups could make Muslim societies (rather than 'Islam' per se) democratic. The author's decades of professional experience in Iran and Egypt assist him in establishing a balanced approach in his comparative study."

"This book is a must-read for serious students of the politics of the Middle East, both inside and outside the academy. Every graduate student working on the politics of the region needs to read it. The chapters analyzing Iranian and Egyptian politics over the last three decades are brilliant synopses, full of rich empirical detail while presenting clear arguments about their different trajectories."

"Making Islam Democratic is a key acquisition for any college-level collection strong in Middle East studies. It offers . . . a fine analysis of the contemporary Iranian revolution and its evolution."

"Bayat is an innovative urban social movement theorist whose field research has contributed to a better understanding of social change in the Middle East and the theoretical significance of bottom-up movements as opposed to top-down organized political change . . . Highly Recommended."

"Bayat's approach also abandons the clear dichotomies between state and nonstate actors and between behavioral and ideological moderation. The result is a sharp analysis that accounts for substantial change within a society that continues to hold a strong religious identity, both socially and within the state." 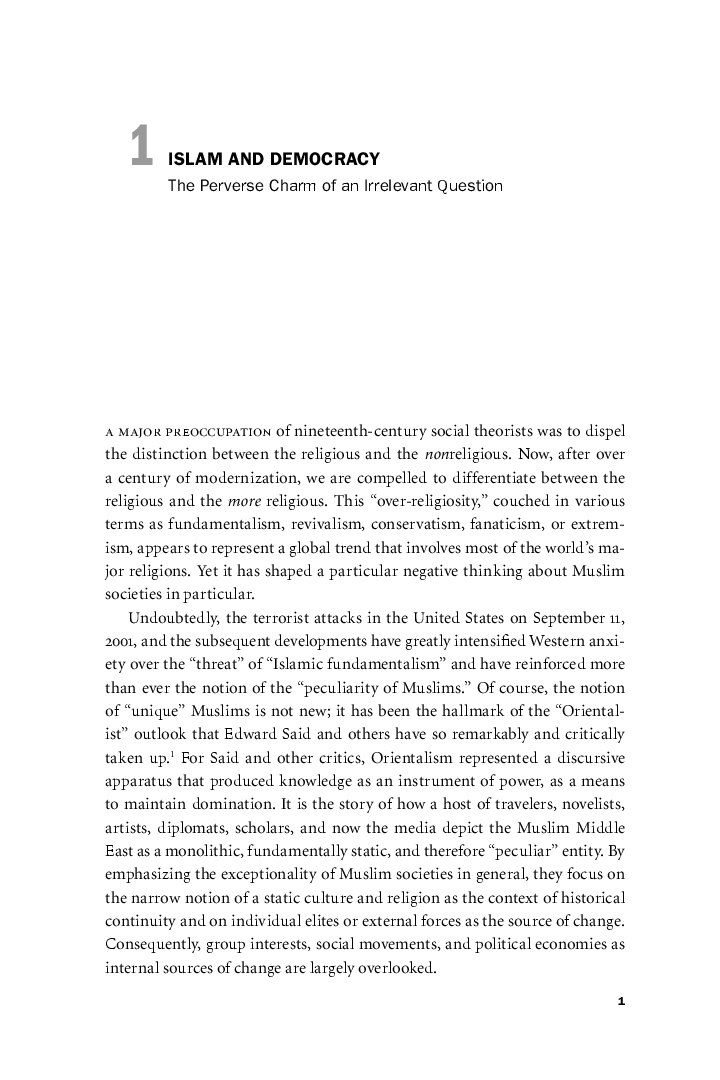 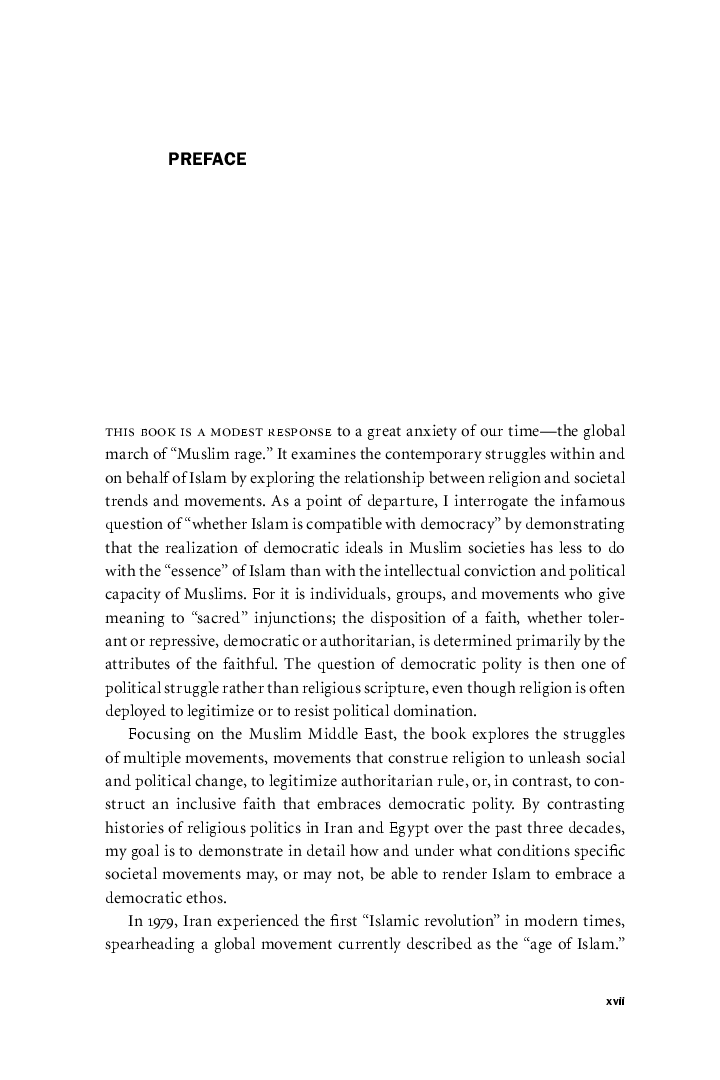 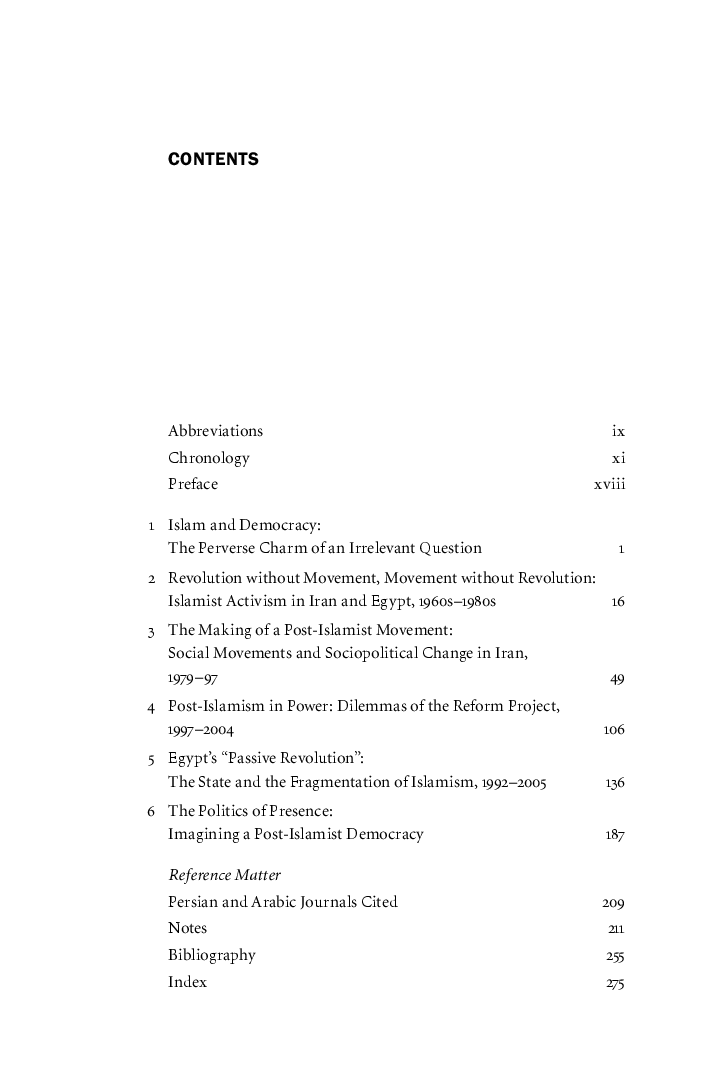