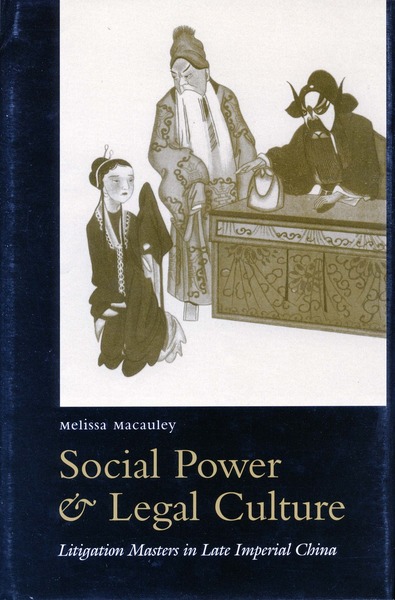 Winner of the 1999 Outstanding Academic Title Award, sponsored by Choice.

Asserting that litigation in late imperial China was a form of documentary warfare, this book offers a social analysis of the men who composed legal documents for commoners and elites alike. Litigation masters—a broad category of legal facilitators ranging from professional plaintmasters to simple but literate men to whom people turned for assistance—emerge in this study as central players in many of the most scandalous cases in eighteenth- and nineteenth-century China. These cases reveal the power of scandal to shape entire categories of law in the popular and official imaginations.

The author characterizes litigation masters as entrepreneurs of power, intermediaries who typically emerge in the process of limited state expansion to provide links between local interests and the infrastructure of the state. These powermongers routinely acted in the interests of the local elite and the male lineage. But cases preserved in criminal archives also reveal a clientele surprisingly composed of the subordinate actors in legal disputes—widows fighting in-laws and other men, debtors contesting creditors, younger brothers disputing older ones, and common people charging the rich. Challenging earlier scholarship claiming that the Chinese legal system simply maintained the hegemony of elites and the patriarchal order, this study shows how the legal tools of domination were often transformed into weapons of social resistance and revenge.

The book also examines the manifold ways in which legal practice, Confucian ideology, and popular entertainments like opera and storytelling coalesced into Chinese legal culture. Popular traditions in particular did not simply reflect legal culture but actively influenced it, shaping common presumptions about law that transcended differences of class and region. Exploring Chinese legal culture in the structural contexts of commercialization, changes in property transactions, and ineradicable litigation backlogs, the author explains why litigation was condemned by all classes of Chinese men and women even as all classes litigated.

Melissa Macauley is Assistant Professor of History at Northwestern University.

"A fascinating account. . . . [Macauley] has put forth sophisticated arguments which will guide the next round of archival discoveries in Chinese legal and social history."

"Macauley's book will be important reading for those who want to understand both the stereotypes and the realities of legal culture of imperial China. It is wonderfully rich in archival material, and its treatment of case materials constitutes document reading at its very best."

"This work pushes the reader to move beyond interpretive clichés to consider new ways of looking at Qing law, legal institutions, and judicial administration, and Macauley has broadened the methodological and interpretive approaches to all three."