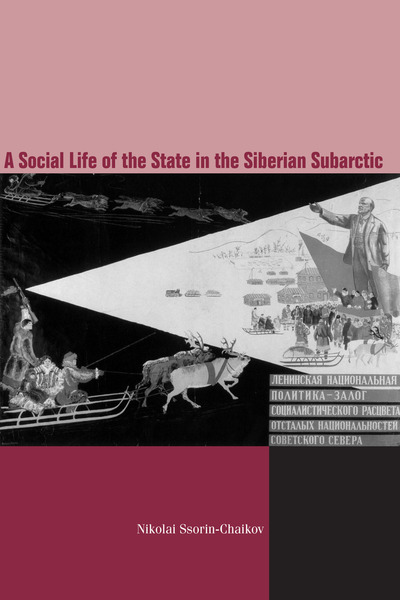 The Social Life of the State in Subarctic Siberia
Nikolai V. Ssorin-Chaikov

Current cultural theory makes much of the role of the imagination of the "primitive" and the "indigenous" in the making of modern empires. In this study of Russian and Soviet governance of the Evenki hunters and reindeer herders of Northern Siberia, the author explores the reverse side of this social imaginary, exploring what he calls "cultures of statehood" among the very people whom the state consistently rendered stateless. He examines the political uses of state institutions and the practices of identification with the state by indigenous Siberians who are traditionally described as stateless kin-based peoples whose cultures are determined by long-term adaptation to the harsh northern environment and for whom the proximity of state institutions is solely a cause of suffering. Ssorin-Chaikov's goal is not merely to undo the displacement of indigenous lifestyles and identities to the imagined landscape beyond and before the Russian/Soviet state. It is, rather, to chart forms of government that expand alongside displacement, to examine the social life of the state in everyday contexts extending well beyond formal institutions, and to theorize statehood from a unique vantage point.

Nikolai V. Ssorin-Chaikov is Lecturer in Social Anthropology at Cambridge

"Ssorin-Chaikov merits the highest commendation for producing this oustanding work of scholarship."

"The Social Life of State is an impressive book. It makes intelligent and well-balanced use of archival material along with the fieldwork observations, and it is highly successful in problematizing the volatility of 'authenticity' as a social and cultural category for the indigenous populations as wells as for the Russians."

"[T]he book is engaging, well written, and perceptive. It is an important contribution to improving our understanding of indigenous life in the Soviet and post-Soviet Subarctic."