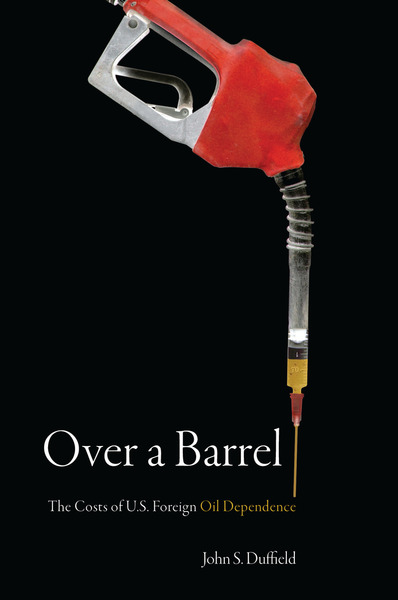 Over a Barrel
The Costs of U.S. Foreign Oil Dependence
John S. Duffield

Winner of the 2008 Outstanding Academic Title Award, sponsored by Choice.

The United States is highly dependent on foreign oil. Well over half of the oil and petroleum products consumed in America—approximately 12 million barrels per day, or more than 600 gallons for every man, woman, and child each year—now come from abroad. And the U.S. government projects that the level of imports will only continue to rise, reaching between 16 and 21 million barrels per day by 2025.

What precisely are the costs of U.S. foreign oil dependence? Unfortunately, no one has yet offered a satisfactory answer to this vital question. As a result, the costs to the United States of its dependence on oil from abroad have gone largely unrecognized and, in fact, are much greater than most people realize. Some costs, like the annual bill for oil imports—and, by reflection, the price that motorists pay at the pump or the size of homeowners’ heating oil bills—are obvious and quantifiable. A number of others, however, are not so apparent or easy to measure. For example, it is difficult to put a price tag on the costs of coddling oil-rich authoritarian regimes at the expense of promoting representative government, human rights, and other important values.

This book seeks to remedy this oversight by providing the first comprehensive analysis of the costs—both economic and policy-related—of U.S. foreign oil dependence and how they might be reduced. It shows that since the 1970s, the economic costs alone have run into the trillions of dollars. Successive administrations have tended to neglect the opportunities at home to reduce these costs by limiting demand. Instead, they have emphasized foreign and military policies that have proven both highly expensive and largely unsuccessful.

One positive conclusion the author draws is that the opportunities for reducing oil consumption remain largely unexploited and the costs of U.S. foreign oil dependence can still be substantially reduced at relatively little expense. At least as important, however, will be rethinking and revising the expensive foreign, security, and military policies and commitments that have developed around U.S. foreign oil dependence over the past three decades.

"Making the obvious but often overlooked point that depending on imported oil carries more than economic consequences at the gas pump and the home furnace, Duffield notes the costs to American consumers, such as skyrocketing heating bills from government foreign policy and military efforts to protect unreliable overseas supplies. So far, those policy responses have increased rather than decreased costs. ...Although Duffield is dubious about American intervention overseas, he does endorse American hegemony as a route to changing oil-related attitudes and policies worldwide."

"Duffield's outstanding book lays out the comprehensive costs of U.S. oil dependence. He shows very effectively that these costs are far higher than we believe. This should be 'must reading' for academics, students, and policymakers concerned about America's future."

"John Duffield is at once an excellent political scientist, experienced observer of American foreign affairs, clear and crisp writer, and pragmatic policy analyst. His study on the costs of our foreign oil addiction is an excellent guide to those wishing to understand this critical challenge for our planet's environmental sustainability and our nation's economy and security."

"Now here is a well-timed book! And a very rewarding one. John Duffield's analysis of American dependence on foreign oil arrives amidst steep global oil prices and staggering American oil imports, conditions likely to persist and to provoke rising controversy...It will be of great benefit to specialists on international politics, students, and general readers." 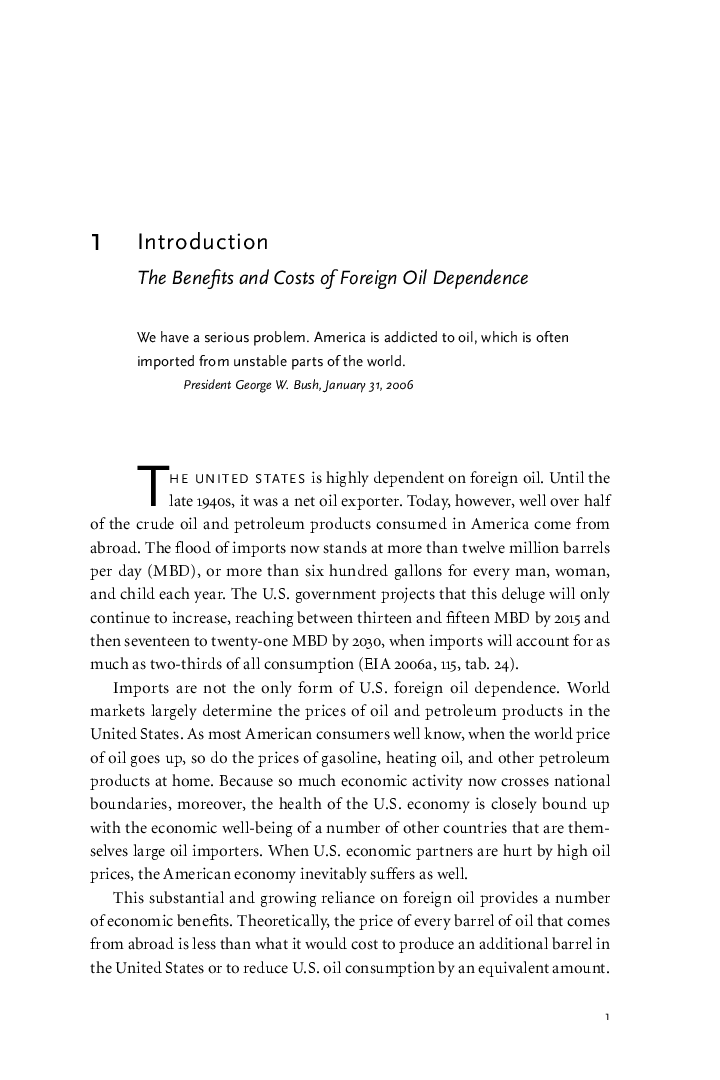 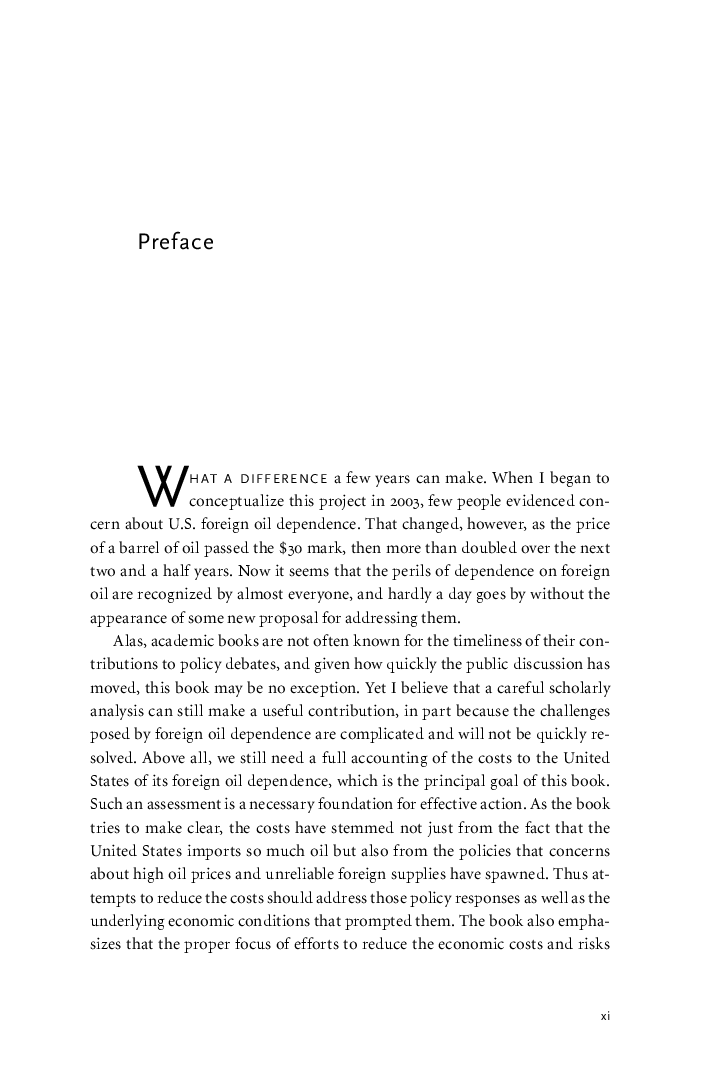 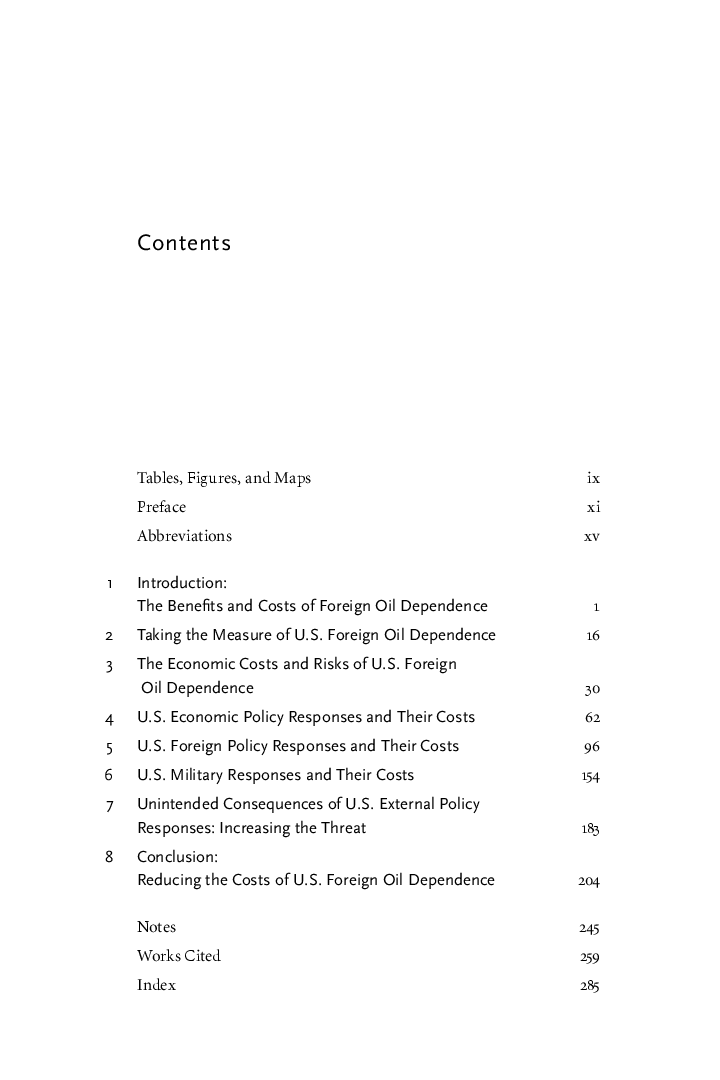