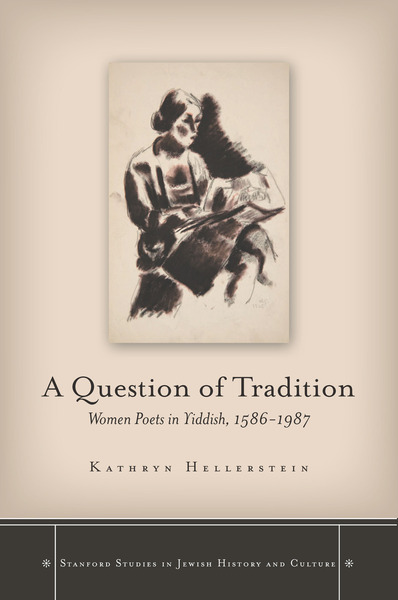 Winner of the 2015 Fenia and Yaakov Leviant Memorial Prize, sponsored by the Modern Language Association (MLA).

In A Question of Tradition, Kathryn Hellerstein explores the roles that women poets played in forming a modern Yiddish literary tradition. Women who wrote in Yiddish go largely unrecognized outside a rapidly diminishing Yiddish readership. Even in the heyday of Yiddish literature, they were regarded as marginal. But for over four centuries, women wrote and published Yiddish poems that addressed the crises of Jewish history—from the plague to the Holocaust—as well as the challenges and pleasures of daily life: prayer, art, friendship, nature, family, and love. Through close readings and translations of poems of eighteen writers, Hellerstein argues for a new perspective on a tradition of women Yiddish poets. Framed by a consideration of Ezra Korman's 1928 anthology of women poets, Hellerstein develops a discussion of poetry that extends from the sixteenth century through the twentieth, from early modern Prague and Krakow to high modernist Warsaw, New York, and California. The poems range from early conventional devotions, such as a printer's preface and verse prayers, to experimental, transgressive lyrics that confront a modern ambivalence toward Judaism. In an integrated study of literary and cultural history, Hellerstein shows the immensely important contribution made by women poets to Jewish literary tradition.

Kathryn Hellerstein teaches Yiddish as associate professor in the department of Germanic Languages and Literatures at the University of Pennsylvania. Her books include Paper Bridges: Selected Poems of Kadya Molodowsky and Jewish American Literature: a Norton Anthology.

"This book is a hugely valuable resource for anyone interested in Yiddish poetry, literature, and women's writing. Readers unable to access the texts in Yiddish will be please that Hellerstein's English translations are presented alongside the poetic explications . . . Hellerstein's complex book brings new considerations to the study of tradition with regard to women poets writing in Yiddish. It also whets the appetite for the publication of more collections and critical appraisals to reveal the still large number of Yiddish women writers, including poets, who remain unknown and unrepresented."

"Hellerstein used the Korman anthology as the starting point for a twenty-five-year project. The result is A Question of Tradition: Women Poets in Yiddish, 1586-1987 — a book that is impressively wide-ranging and just as impressively deep . . . Her new book is a close look at eighteen poets, with special attention directed toward the many different ways these women wrote about the experience of being female. Training a gender-studies lens on poems that span four centuries, Hellerstein helps us achieve an intimate understanding of a wide variety of work."

"Aside from the alluring treasury of poems this book holds, it is also a magnum opus unto itself. Author Kathryn Hellerstein . . . worked on it for about 25 years. So it is not surprising that she writes with such powerful authority about poems that seem to be gushing with life . . . Hellerstein has provided a new perspective on the female poets who contributed to Jewish literary tradition, creating a trove of stunning poetry as they did."

"This is a serious book for serious students of Yiddish poetry . . . Each chapter champions a different aspect of the journey, from the devotional to the secular . . . This is an erudite contribution to the 'Stanford Studies in Jewish History and Culture' series . . . Summing Up: Recommended."

"Women's Yiddish poetry finally gets its scholarly due from Kathryn Hellerstein, long-time champion of the female Yiddish poetic voice, in her comprehensive and accessible account, A Question of Tradition: Women Poets in Yiddish, 1586–1987 . . . Hellerstein's book is comprehensive, supplying the biographical details of six important poets' lives in one volume for the first time. Letters she quotes are revealing. . . . [Hellerstein's] book provides an amplitude to the discussion of these women that was previously denied them. The translations, accurate in meaning and still with the effortlessness of poetic language, capture the urgency of their voices. And Hellerstein's book lays to rest any question of tradition; it is there: inflected by prayer as the book's framework suggests, but also colored by difficult lives and a confidence born of their survival."

"This is the untold story of women poets across generations and continents, who gave voice to their womanhood and sexuality, outrage and desire, amusements and commitments, even as they engaged a sometimes forgiving, sometimes indifferent and sometimes vengeful God. Kathryn Hellerstein guides us through this fascinating story with precision, patience, empathy and consummate grace."

"A Question of Tradition is an important book and an impressive contribution to the field of Yiddish studies. Kathryn Hellerstein writes beautifully. Her sensitive and illuminating readings of the poetry of a select group of Yiddish women poets makes a strong case for a tradition of women's poetry in Yiddish. Impressively researched and argued, Hellerstein's discussions range from the work of relatively obscure early poets like Toybe Pan to the well-known Kadya Molodovsky. In the process she delineates a female literary tradition in Yiddish literature that has long been obscured and neglected. This book will make an invaluable contribution, not only to the field of Yiddish Studies but to Women's Studies as well." 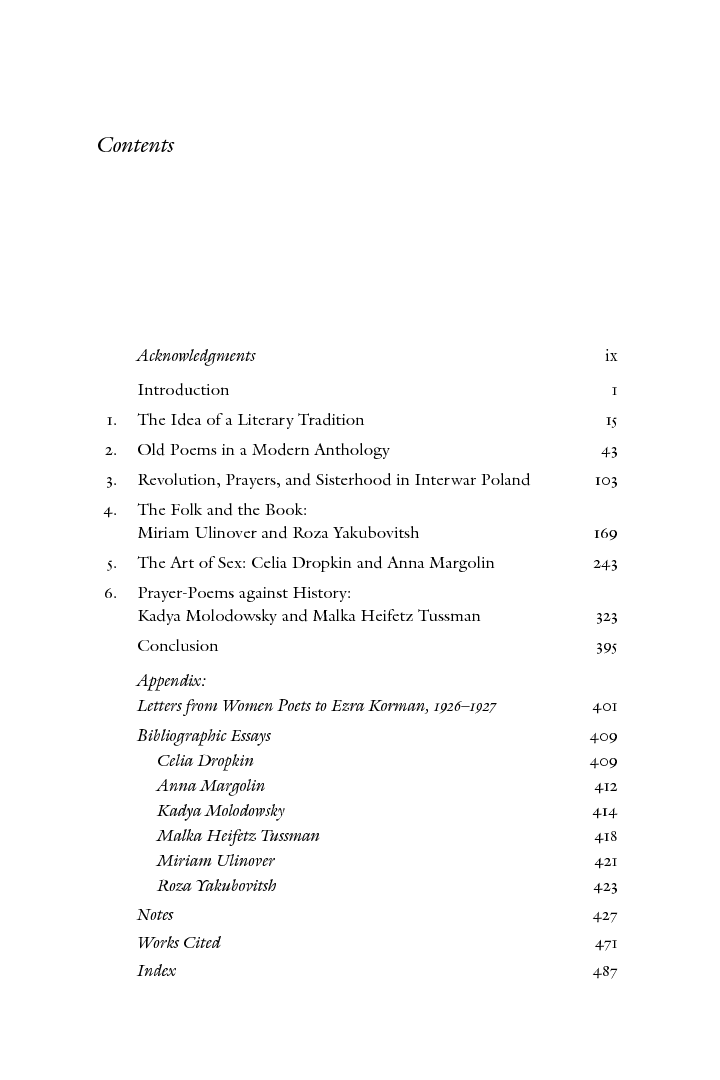 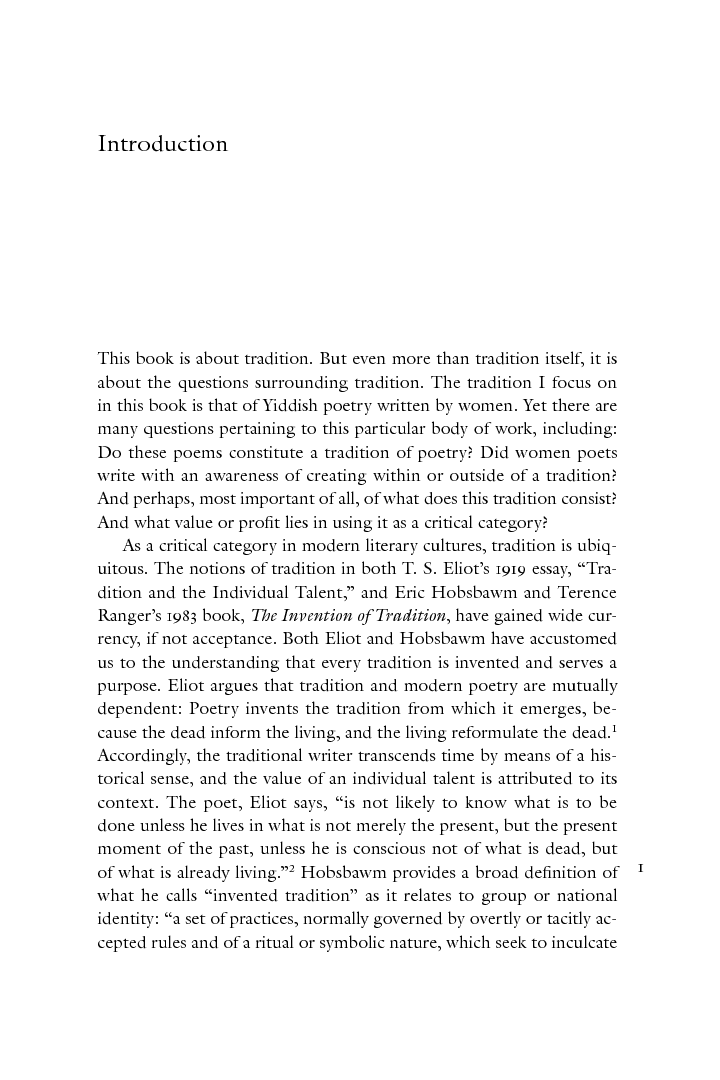