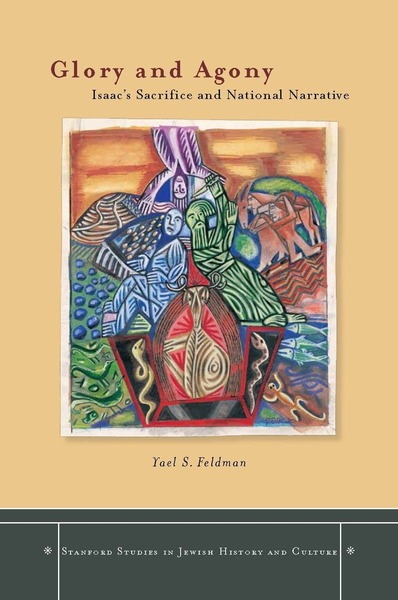 Glory and Agony is the first history of the shifting attitudes toward national sacrifice in Hebrew culture over the last century. Its point of departure is Zionism's obsessive preoccupation with its haunting "primal scene" of sacrifice, the near-sacrifice of Isaac, as evidenced in wide-ranging sources from the domains of literature, art, psychology, philosophy, and politics. By placing these sources in conversation with twentieth-century thinking on human sacrifice, violence, and martyrdom, this study draws a complex picture that provides multiple, sometimes contradictory insights into the genesis and gender of national sacrifice.

Extending back over two millennia, this study unearths retellings of biblical and classical narratives of sacrifice, both enacted and aborted, voluntary and violent, male and female—Isaac, Ishmael, Jephthah's daughter, Iphigenia, Jesus. Glory and Agony traces the birth of national sacrifice out of the ruins of religious martyrdom, exposing the sacred underside of Western secularism in Israel as elsewhere.

Yael S. Feldman is Abraham I. Katsh Professor of Hebrew Culture at New York University and the author of No Room of Their Own: Gender and Nation in Israeli Women's Fiction (1999), a National Jewish Book Awards Finalist; its Hebrew version won the Friedman Prize for Hebrew Literature.

"Despite the vast historiography [of Akedat Yitzhak], Yael Felman's contribution is significant. Glory and Agony presents and interprets Modern Hebrew literature of the trope of Akedat Yitzhak in the Palestine and the State of Israel of the twentieth century . . . Readers with access to Hebrew will derive the most from this thoroughly engaging text. Everyone will learn much from a careful reading."

"Yael Feldman's Glory and Agony: Isaac's Sacrifice and National Narrative is an enthralling engagement with one of humanity's most ancient and consequential tropes . . . Though there have been numerous studies of the ever-evolving and sometimes oppressive nature of this myth, none has come close to providing the kind of brave interdisciplinary acumen Feldman's scholarship delivers . . . Glory and Agony is a work of forceful originality yet always meticulously researched, containing illustrative, provocative epigraphs as well as nearly ninety pages of informative and lively notes that engage with extraordinarily eclectic sources."

"This book by Yael Feldman presents a detailed, complex and sometimes provocative study of the way writers, poets, dramatis, critics, some scholars, and a few visual artists in the State of Israel during the last century have dealt with this account. . . This brief summary only begins to suggest the variety and complexity of material covered in this book. Anyone who knows the Israeli literary scene will find this book an illuminating discussion of that scene and a significant contribution to it."

"Feldman's book is extremely important and a much needed contribution; a Hebrew version is a desideratum. I know of no other comprehensive study of the akedah, the Sacrifice of Isaac, that compares to this superb multidisciplinary investigation of the Hebrew sources, that demonstrates a rare erudition in both the Jewish tradition and contemporary literature, that suggests original links and connections, and that offers very productive comparative readings."

—Galili Shahar, Cathedra: Journal for the Study of Land-of-Israel [Translated from Hebrew]

"In one of the most comprehensive and impressive historiographies of Hebrew national culture, Feldman elegantly yet passionately presents a multi-dimensional narrative of the Israeli preoccupation with Genesis 22 . . . [N]ew and fresh . . . Feldman's book is an outstanding achievement that is likely to engage scholars and readers for many years to come."

"Feldman has undertaken an ambitious project [and] ranges over an abundance of literary material . . . [M]assively detailed and comprehensive . . . One of the book's strengths is that it helps demonstrate the significance of modern Hebrew culture to a wider audience."

"The achievements of this [book] are outstandingly intriguing . . . Glory and Agony is a highly condensed, analytic encyclopedia of the trope of sacrifice in Western culture."

"Feldman's study stands as a role model for continuing investigations of biblical tropes in modern literatures; indeed her book may even remain the crowning study of the binding of Isaac as a literary trope. But one thing is certain—its readers are unlikely to ever again encounter any kind of sacrificial narrative without harking back to Feldman's observations."

"This fascinating, multifaceted, and erudite book traces the use of the narrative(s) of the 'binding of Isaac' (Hebrew Akedah) or 'sacrifice of Isaac' (English) in twentieth-century secular Israeli literature. It discusses the various and changing ways in which the motif of a father's willingness to sacrifice his son to God has been turned into a secular metaphor for military self-sacrifice and heroic death in battle . . . Feldman's book is both very enjoyable and highly thought provoking, and I can recommend it whole-heartedly."

"Feldman's first-rate interdisciplinary study demonstrates not only how modern ideologies produce re-readings and rewritings of ancient myth but also how ancient myths weight and reshape these very ideologies. A must read for any reader interested in Hebrew culture and the psyche of modern Israel, and an insightful read for inquisitive readers at large."

"Glory and Agony is an excellent intellectual study that probes into the heart of contemporary Israeli identity while situating and arguing its construction in two mutually inclusive contexts: Jewish tradition and Western thought and philosophy. Clearly an academic work of the highest standards, this important book presents an outstandingly well thought out argument for reconsidering the violent nature of our conduct: personally, collectively, nationally, and globally-universally."

"I find this book to be an outstanding work: it daringly broaches a topic of enormous scope and yet renders a review that is insightful, scholarly, and nevertheless accessible to the informed lay reader. Its presentation is unique, undertaken as an exploration, tracking the evolution of the discourse on sacrifice in order to arrive at the present moment. Feldman adeptly and convincingly shows how the archetypal myth of Isaac, interwoven throughout human history, has been absorbed into and projected by works of fine arts and belles lettres."

"Yael Feldman's Glory and Agony: Isaac's Sacrifice and National Narrative is a dazzling synthesis of political and religious history, particularly the history of the State of Israel and the tradition of Biblical interpretation that, to one's surprise, structures and determines it. This is a new way of writing history. Using the paradigmatic Biblical story of Isaac's binding as her template, Feldman shows that Israeli history, far from leaving the past behind, is actually a recapitulation of the history of Jewish theology, beginning with its invention of human sacrifice and the tradition of putting it to cultural use through centuries of interpretation. It is a true and audacious history, and one bound to draw both praise and fire." 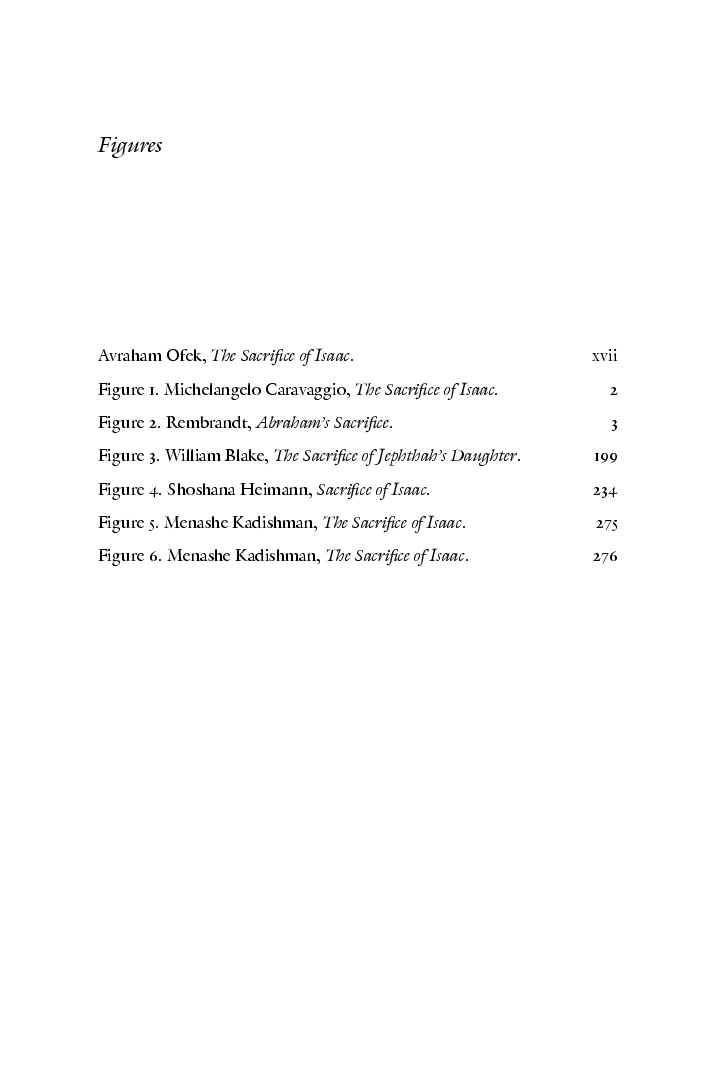 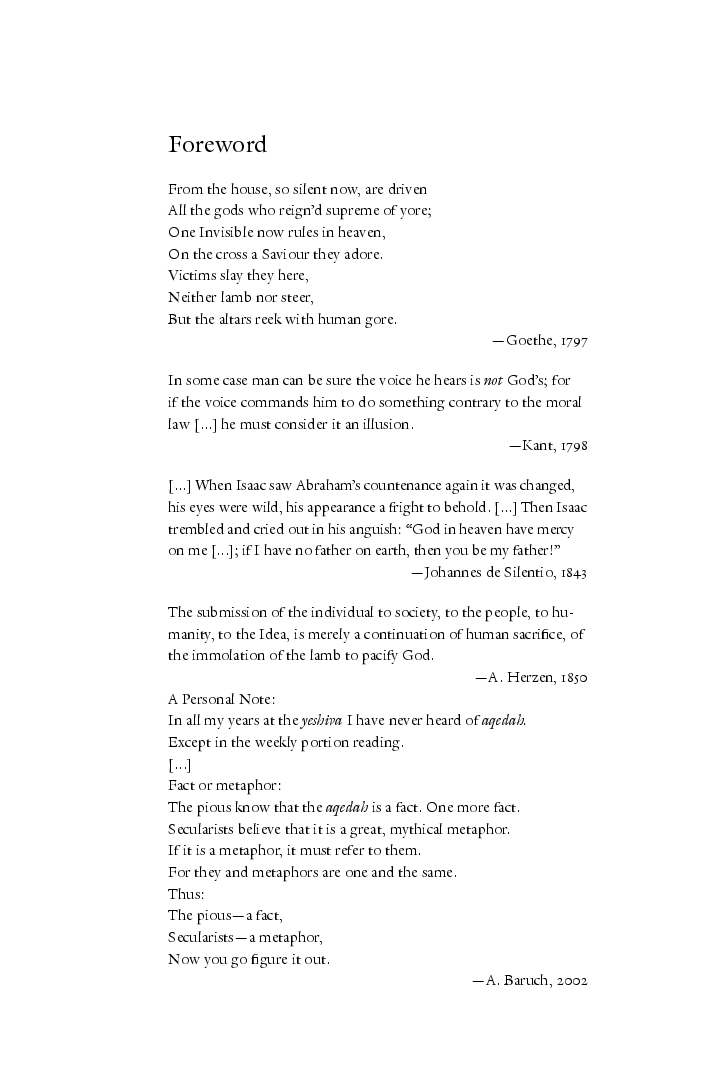 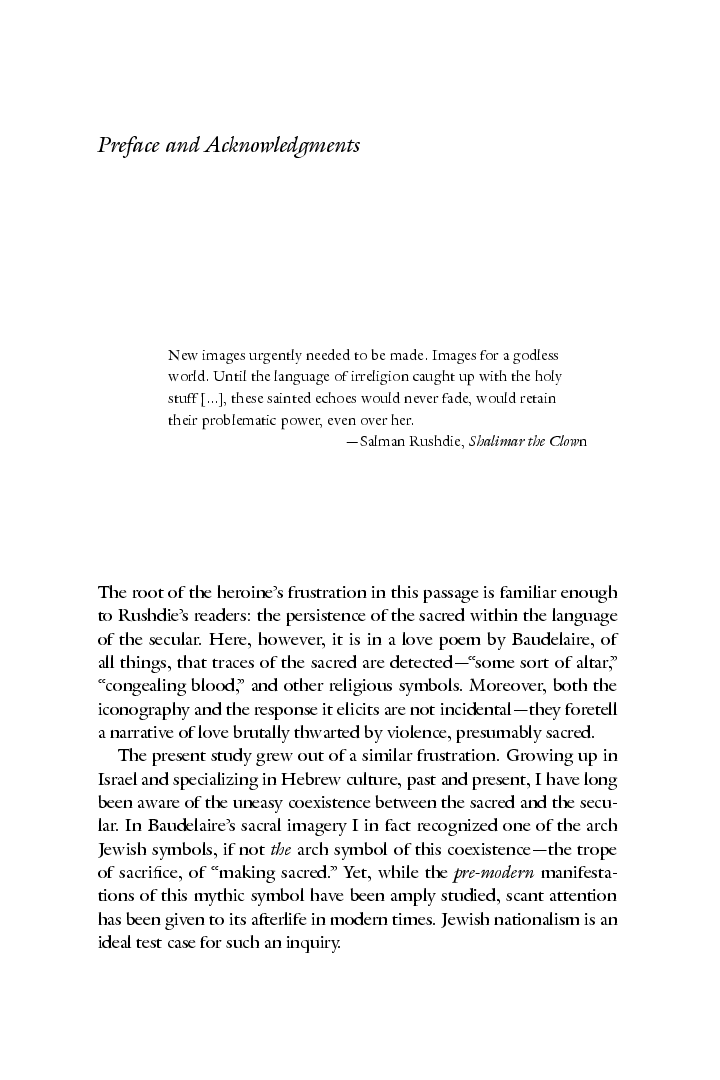 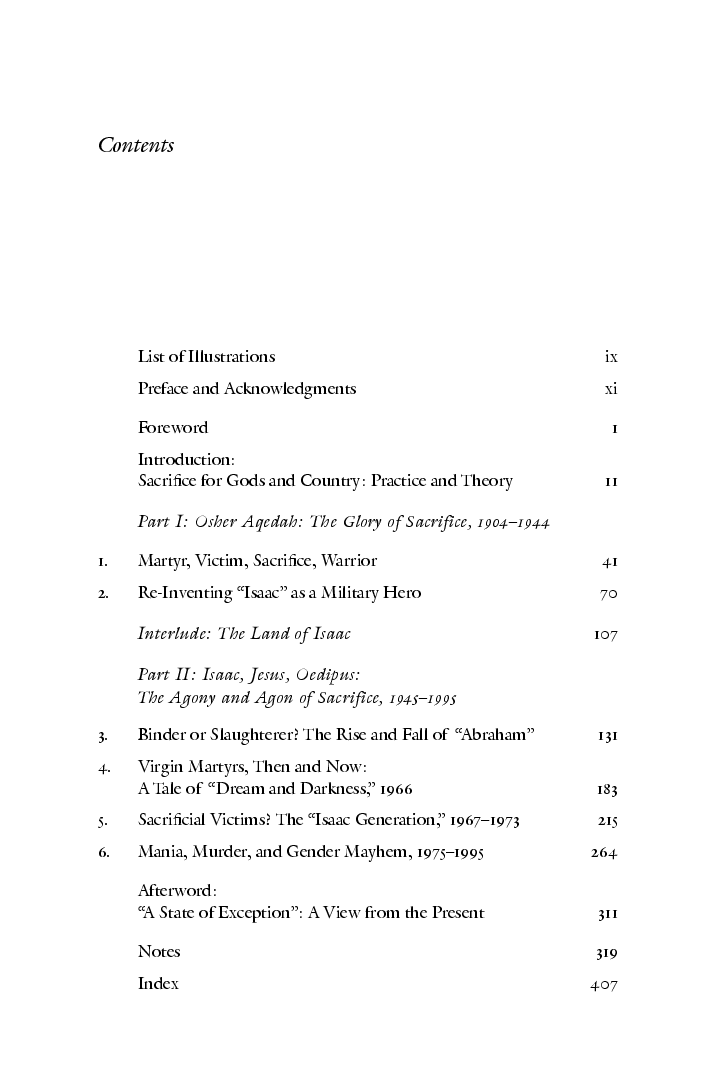