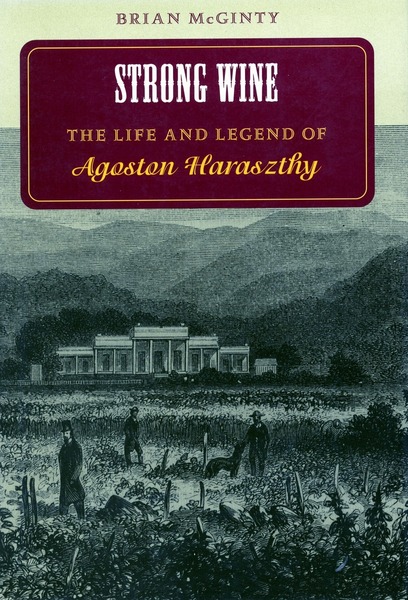 Bold, flamboyant, extravagant, devious, visionary, Agoston Haraszthy (1812-1869) is one of the most fascinating—and elusive—figures in the history of American agriculture. Apart from his pioneer efforts to establish a world-class wine industry in California, he holds other important distinctions: he was the first Hungarian to permanently settle in the United States, author of only the second Hungarian-language book about the United States, founder of one of the earliest towns in Wisconsin, and owner and operator of the first steamboat to engage in regularly scheduled traffic on the upper Mississippi River.

Lured by the discovery of gold to cross the plains to California in 1849, Haraszthy became the first sheriff of San Diego, a member of the California legislature, and the first assayer of the United States Mint in San Francisco. Long fascinated with the possibility of growing fine European grapes in America, he moved in 1856 to northern California’s Sonoma Valley, where he built the first stone wineries in California, introduced more than 300 varieties of European grapes, and planted (or helped his neighbors plant) more than a thousand acres of choice wine vineyards. He made a well-publicized wine tour of Europe in 1862, wrote the first notable book on California wine growing, and built his Sonoma estate into what was widely advertised as “the largest vineyard in the world.”

In this book, the first full-length biography of one of nineteenth-century America’s most interesting and influential immigrants, the author examines Haraszthy’s amazing life, dispels many of the myths that have gathered around him, and makes a careful assessment of his contributions to American immigration and agricultural history.

Brian McGinty is the great-great-grandson of Agoston Haraszthy. Attorney, historian, and writer, he is the author of Haraszthy at the Mint and The Palace Inns. For this book, he spent years researching original sources in Hungary, Wisconsin, California, and Nicaragua (where Haraszthy met a strange death in 1869).

"The definitive biography of 'the father of California viticulture,' an intriguing and compelling book, at once scholarly and entertaining. Haraszthy's checkered career (full of magnificent successes and allegations of scandalous misbehavior) intersects with topics central to an understanding of 19th-century California."

"This fine biography . . . is a balanced, well-written account of a truly remarkable if reckless entrepreneur."