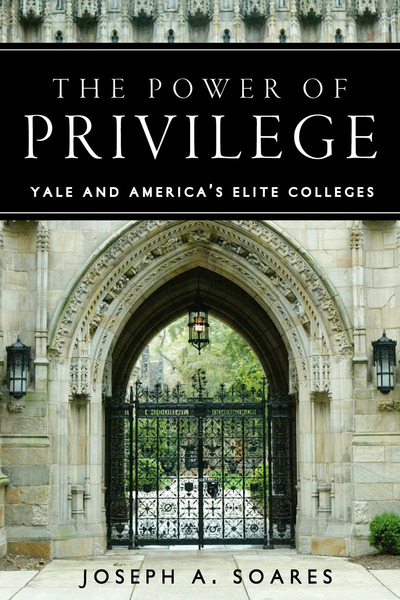 The Power of Privilege
Yale and America's Elite Colleges
Joseph A. Soares

It is widely assumed that admission to elite U.S. universities is based solely on academic merit—the best and brightest are admitted to Harvard, Yale, and their peer institutions as determined by test scores and GPA, and not by lineage or family income. But does reality support those expectations? Or are admissions governed by a logic that rewards socioeconomic status while disguising it as personal merit?

The Power of Privilege examines the nexus between social class and admissions at America's top colleges from the vantage point of Yale University, a key actor in the history of higher education. It is a documented history of the institutional gatekeepers, confident of the validity of socially biased measures of merit, seeking to select tomorrow's leadership class from among their economically privileged clientele. Acceptance in prestigious colleges still remains beyond the reach of most students except those from high-income professional families. Ultimately, the author suggests reforms that would move America's top schools toward becoming genuine academic meritocracies.

Joseph A. Soares is Associate Professor of Sociology at Wake Forest University. He is the author of The Decline of Privilege (Stanford, 1999), which received the prize for outstanding book from the Culture Section of the American Sociological Association.

"This close examination of admissions, always carefully contextualized in the broad historical trends in elite higher education of which they were a part (just a few of the connections that the book fruitfully explores are anti-Semitism, forays into eugenics, the rise of standardized tests, and the quantification of character), draws our focus to the hidden mechanisms by which reproduction is effected. This is important work and will likely be the book's most lasting contribution... This well-written and often fascinating book exhorts readers to look vigilantly behind the rhetoric of meritocracy and to pay closer attention to the real effects of admissions policies."

"[An] excellent 'sociological account' of a highly selective institutional gatekeeper: Yale University... Soares's history of Yale admissions is tragically amusing. He chronicles an embarrassing past that includes Yale's enthusiasm for the early SAT as a tool of eugenics and the college's participation, until 1968, in the Ivy League practice of taking nude pictures of freshmen men to study the relationship between body type and ability."

"Soares presents compelling evidence that the Scholastic Assessment Test (SAT, later renamed the Scholastic Achievement Test) not only opened ivy-covered doors to a more academically talented and diverse student body but also assured the continued selection of students from the highest economic stratum... He provides an interesting social history of admissions at one institution and a window into a world that, if Soares is correct, most readers likely were never intended or permitted to set foot."

"'Even Americans unfamiliar with the word embrace meritocracy as if it were a birthright,' writes Soares, who taught sociology at Yale and uses the university as a test case for a stinging indictment of how far Yale and similar colleges fall short of the meritocratic ideal. He also offers provocative suggestions for reform."

"Soares has become something of an expert on the social transformations of universities. His first book, also from Stanford, was The Decline of Privilege: The Modernization of Oxford University, which traced the way Oxford evolved from its Brideshead Revisited image to an institution that had meritocratic values. In an interview, Soares said he wanted to do an American companion and started off assuming he would find the same sort of evolution in the United States. But with a focus at Yale, that's not what he found. Given that Yale has described itself repeatedly as having gone through such an evolution, this was surprising to Soares, and he argues that the differences between myth and reality point to important steps for a number of colleges to consider today."

"The Power of Privilege is a provocative critique of theories of meritocracy in admission decisions at elite American universities. Distinguishing between factors that influence who applies to elite schools and those that increase the odds of admission, Soares draws nuanced inferences about class reproduction. This is must reading for anyone interested in understanding admission policies and practices in elite universities."

"The Power of Privilege clarifies the dynamics of elite reproduction, shows how privilege and social inequality are deeply embedded in institutions, and demonstrates the important role that meritocratic schools plays in society. This book is masterful. Joseph Soares has established himself as one of the most promising social critics."

—Judith Blau, author of Justice in the United States, Professor of Sociology, University of North Carolina

"The Power of Privilege is a welcome addition to the literature on elite colleges, educational stratification, and the meritocratic myth in college admissions. This is a story not just of SAT scores, but also of admissions processes that favor legacies, athletes, and nebulous qualities of leadership and character in which the interests of the wealthy and professional classes in securing advantages for their children indeed are well served! Fundamental change may be unlikely anytime soon, but Soares nevertheless advances some interesting proposals for opening the gates a bit wider."

"[The Power of Privilege] shows to anyone without experience in college admissions the ambiguity of constructing admissions policies and converting how someone is presented 'on paper' into a judgment of that individual's potential for future success. One of the book's strengths is Soares' engaging writing style, which captures the complexity of the issue but is nonetheless highly readable. This broadens its appeal beyond experts in the field to an audience perhaps less familiar with the scholarly body of work pertaining to questions of meritocracy and social reproduction.... The Power of Privilege provides an engaging counterargument to claims by Lemann (1999) and others that pure academic merit prevails over socioeconomic privilege in current college admissions." 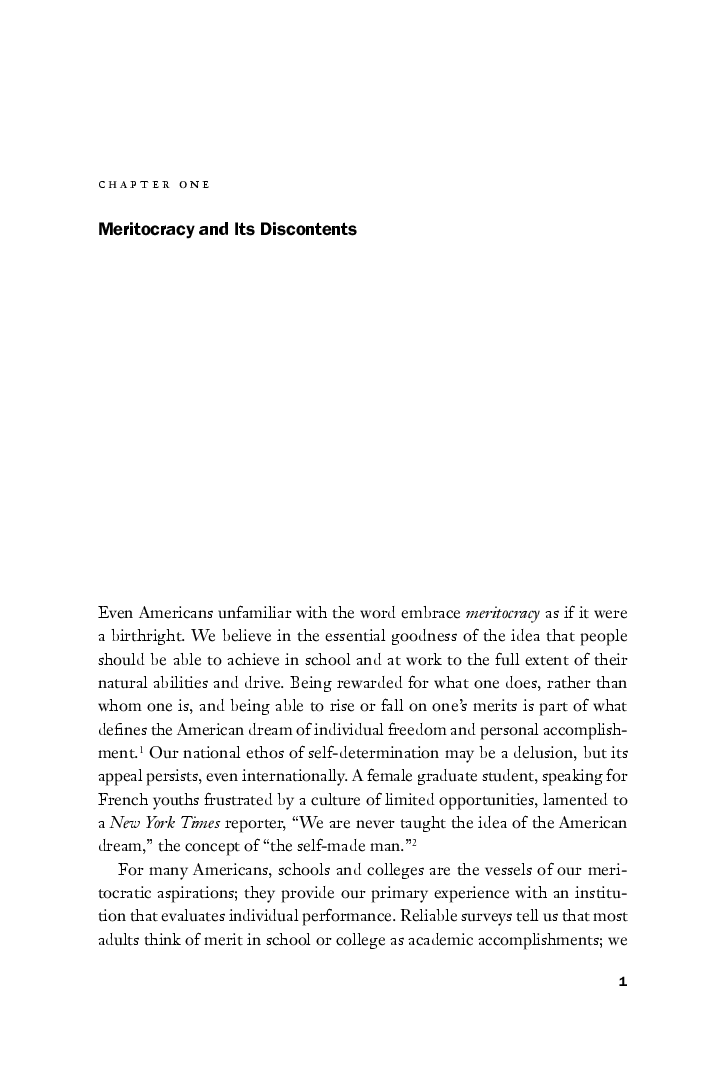 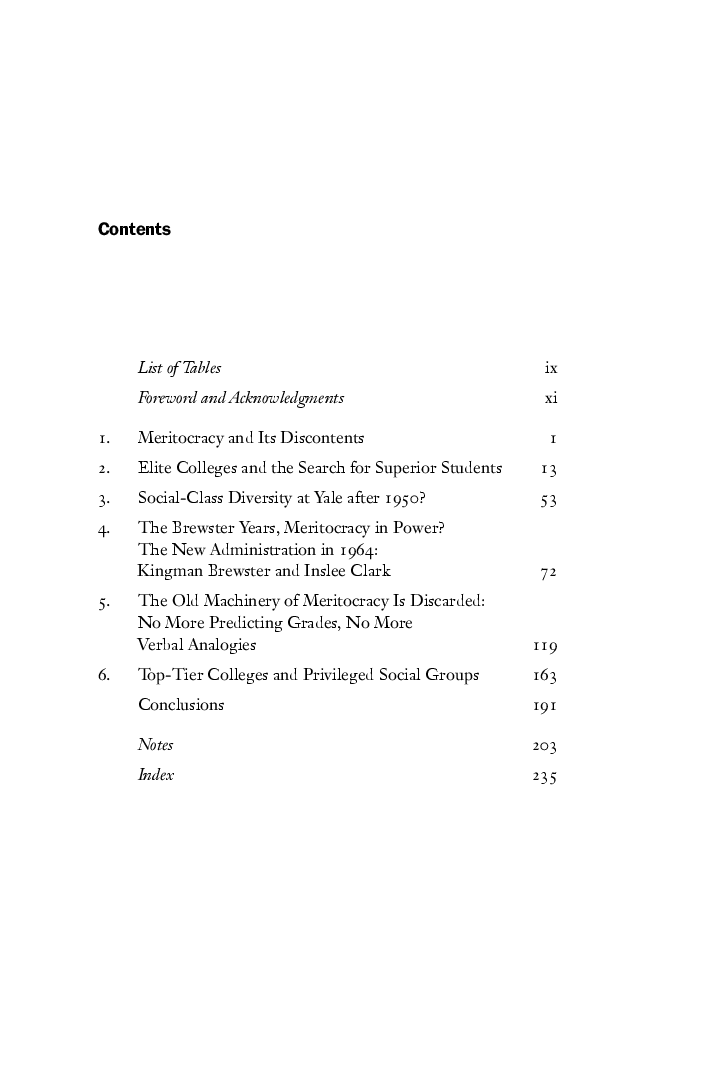