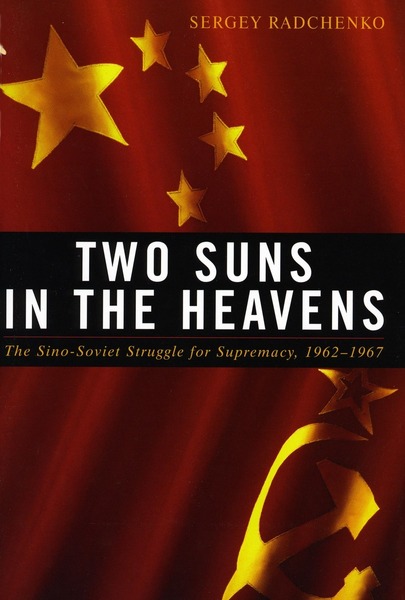 Using newly available archival sources, Two Suns in the Heavens examines the dramatic deterioration of relations between the USSR and China in the 1960s, whereby once powerful allies became estranged, competitive, and increasingly hostile neighbors.

Sergey Radchenko's authoritative account of these years shows how the intrinsic inequality of the Sino-Soviet alliance—seen as entirely natural by the Russians but bitterly resented by the Chinese—resulted in its ultimate collapse. Through a careful and comprehensive investigation of policymaking in both Moscow and Beijing, Radchenko creates a new framework for understanding the role of power struggle, ideology, personalities, and culture in Sino-Soviet relations.

Sergey Radchenko is a Fellow in International History at the London School of Economics and Political Science.

"A short summary cannot do justice to this book's richness. Radchenko's mastery of Soviet archives is outstanding . . . [A] very fine monograph."

"Reading this interesting and well-balanced history of five crucial years in Sino-Soviet diplomacy is like watching a slow-motion train wreck, as the reader becomes an eyewitness to relations declining from bad to worse between the two socialists superpowers."

—Bruce A. Elleman, The Russian Review.

"I this richly, eloquently written book, Radchenko provides an in-depth, incisive assessment of the turbulent relationship between Beijing and Moscow against a broad international backdrop from 1962 to 1976...His study in large measures transcends conventional interpretations and enriches the current scholarship on Sino-Soviet relations."

"[Two Suns in the Heavens] succeeds in using a broad range of new materials to produce an unusually nuanced and insightful analysis of Soviet management of the dispute, as well as a provocative new of Mao's approach to it."

"This book is an excellent addition to the burgeoning literature on the international relations of the communist bloc during the Cold War."

"... the book is a real contribution to our understanding of the period and its main actors."

"Making excellent use of new archival materials, Sergey Radchenko illuminates a topic that we have known only in general outlines. Two Suns in the Heavens gives us a very fine understanding of the texture of the Sino-Soviet relationship, and of its twists and turns."

"Two Suns in the Heavens represents a major contribution to the study of Sino-Soviet relations as well as the study of Cold War international history."