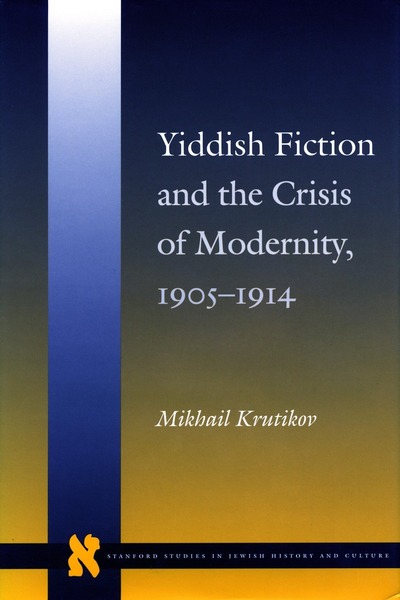 This book examines representations of modernity in Yiddish literature between the Russian revolution of 1905 and the beginning of the First World War. Within Jewish society, and particularly Eastern European Jewish society, modernity was often experienced as a series of incursions and threats to traditional Jewish life. Writers explored these perceived crises in their work, in the process reconsidering the role and function of Yiddish literature itself.

The orientation of nineteenth-century Yiddish fiction toward the shtetl came into conflict with the sense of reality of young writers, who felt themselves part of a rapidly changing modern urban environment. This opposition between the generations was reflected in their principles of plot construction. The conservatives employed cyclical patterns, producing mythological schemes for incorporating the new experience into the traditional order. Modernists emphasized the uniqueness of the new, and therefore preferred a linear organization of plot with emphasis on the transformation of individual character.

The texts under discussion (primarily novels and novellas) are analyzed with respect to the way they represent different aspects of the modern world: economic change, revolutionary politics, emigration, and the emancipation of women. The author’s methodology draws upon a variety of semiotic, structuralist, and psychoanalytic approaches, informed by insights derived from the Soviet Marxist tradition.

Mikhail Krutikov is Associate Professor of Slavic and Judaic Studies at the University of Michigan, Ann Arbor, and the author of Yiddish Fiction and the Crisis of Modernity, 1905-1914 (Stanford University Press, 2001).

"Krutikov's work is a welcome addition to the growing field of Yiddish literary studies."

"In this remarkably readable book, Krutikov constructs, with elegance and rigor, sturdy bridges built out of the disparate offerings of Yiddish litterateurs spanning the turbulent, shifting historical terrain between the Russian revolution in 1905 and the onset of World War I in 1914 . . . .This book is requisite for scholars and students of history, literary theory and criticism, and twentieth-century Yiddish literature. It will undoubtedly be captivating for the general reader as well."

"His sophisticated deployment of Marxist theory and modern critical methodologies, coupled with his wide reading in several languages, has ensured that his study is not only stimulating in itself, but will create a seedbed for new approaches to Yiddish fiction."