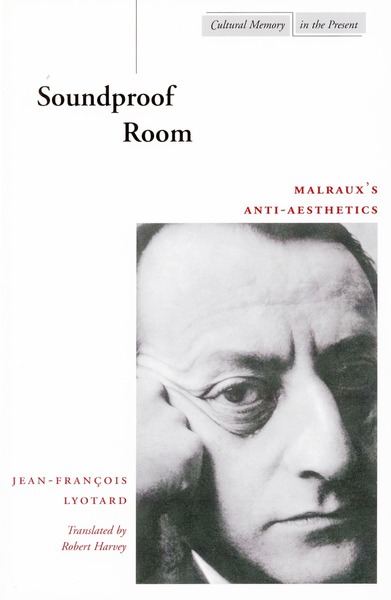 In this, one of the last published books planned by one of the major cultural philosophers of our time, Lyotard addresses, in his powerful and allusive critical voice, Malraux's reflections on art and literature. The result, more than a sequel to Lyotard's acclaimed biography Signé Malraux, tells us as much about Lyotard and his critical concerns as it does about Malraux. It gives us Lyotard's final thoughts on his long study of the critical, disruptive possibilities of art and of the relation between aesthetics and politics. At first glance, Lyotard's sympathetic and generous analysis of Malraux might be surprising to some, for Malraux's metaphysics of art seems far removed from, if not diametrically opposed to, Lyotard's postmodern, experimental approach. But this is perhaps the book's greatest achievement, for Lyotard succeeds both in giving a compelling critical reading of Malraux (and through him of an entire era of art criticism) and in presenting, complicating, and developing his own position on art and aesthetics.

In order to present Lyotard's exquisitely compact style in the best possible way, the original French text appears on facing pages with the English translation.

The late Jean-François Lyotard was Emeritus Professor of Philosophy at the University of Paris-VIII and Professor of Humanities at Emory University. Of his many books to appear in English, Stanford has published The Confession of Augustine (2000), Lessons on the Analytic of the Sublime (1994), and The Inhuman: Reflections on Time (1991).