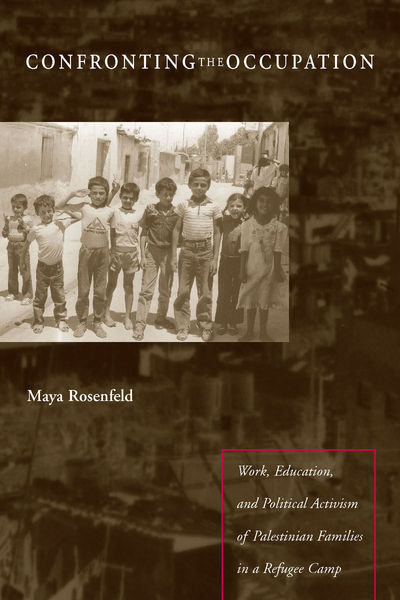 Confronting the Occupation is a study of work, education, political-national resistance, family, and community relations in a Palestinian refugee camp under conditions of Israeli military occupation. It is based on extended field research carried out by an Israeli sociologist-anthropologist in Dheisheh camp, south of Bethlehem, between 1992 and 1996. Emphasis is placed on how men and women, families, and the local refugee community confront the occupation regime as they seek livelihoods, invest in the education of younger generations, and mount a political and often militant struggle. In the process, men lose their jobs in the Israeli labor market, women, old and young, enter the workforce, university graduates are compelled to migrate to the Gulf, and political cadres challenge harsh prison circumstances by establishing their own comprehensive counterorder. While directed against the occupation, patterns of coping and resistance adopted by Dheishehians introduced tensions and conflicts into family life, furthering the transformation of gender and generational relationships.

"...Due to its empirical richness and wealth of details, it provides much food for thought."

"Confronting the Occupation is important for its keen and thorough examination of a complex subject. Anthropologists of work will value its detailed depiction of a world of work in the process of inventing itself within an environment of extreme obstacles. The book is also, for similar reasons, of special value to anthropologists of politics, economics, and sociocultural change."

"Maya Rosenfeld has written a critically important work--one of the finest pieces of research on Palestinian-Israeli relations to date. Her ethnography is as substantive as her analysis and the result is powerful, giving the reader a form of access and insight into the lives of Palestinians under Israeli military occupation that is authentic and palpable."