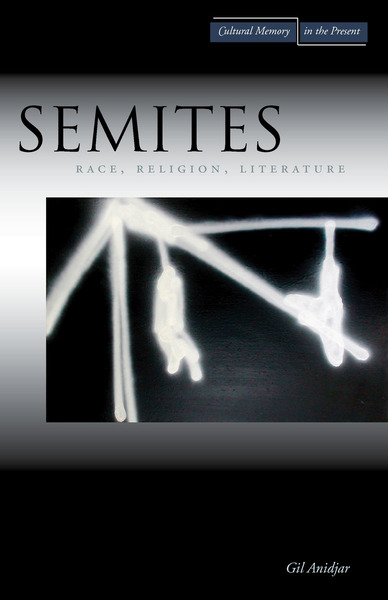 This collection of essays explores the now mostly extinct notion of "Semites." Invented in the nineteenth century and essential to the making of modern conceptions of religion and race, the strange unity of Jew and Arab under one term, "Semite" (the opposing term was "Aryan"), and the circumstances that brought about its disappearance constitute the subject of this volume. With a focus on the history of disciplines (including religious studies and Jewish studies), as well as on lingering political, theological, and cultural effects (secularism, anti-Semitism, Israel/Palestine), Semites: Race, Religion, and Literature turns to the literary imagination as the site of a fragile and tenuous alternative, the promise of something like a "Semitic perspective."

Gil Anidjar is Associate Professor in the Department of Middle East and Asian Languages and Cultures at Columbia University. He is the author of "Our Place in Al-Andalus": Kabbalah, Philosophy, Literature in Arab Jewish Letters (Stanford, 2002) and the editor of Jacques Derrida's Acts of Religion (2002).

“Anidjar argues persuasively that it was precisely at the moment when Christian Europe appeared to vanish, in the wake of the Enlightenment, political revolution, and universalism, that Christendom retained its identity and power through its construction of the Semites­the two enemies, Arab and Jew. The purported separation of religion and politics, a separation that has formed the core of Western historical thinking over the last two centuries, in fact did not occur. In less than two hundred pages, Anidjar succeeds in shifting our understanding of Christianity’s relationship to modernity, to power, to Jews and Arabs, and to Judaism and Islam.” —Mitchell B. Hart, University of Florida

“In this fascinating collection of essays, Gil Anidjar traces the Western conception of the outsider, the enemy, through the once-familiar notion of the Semite. He invites his readers to ponder the remarkable fact that although the category of ‘Semite’ is now scarcely used in its original sense (Arabs and Jews as Europe’s joint Other), its negative, ‘anti-Semite’ (meaning anti-Jews), is very much alive in religious and political discourses in Euro-America. Anidjar is a master of Derridean deconstruction, a provocative analyst of the role of Western Christianity in the formation of contemporary hostilities. This elegant book will upset many complacencies.” —Talal Asad, The CUNY Graduate Center