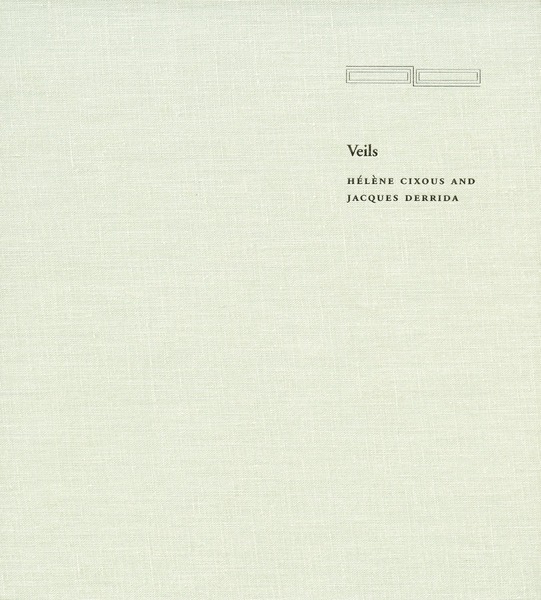 Something of a historical event, this book combines loosely "autobiographical" texts by two of the most influential French intellectuals of our time. "Savoir," by Hélène Cixous, is a brief but densely layered account of her experience of recovered sight after a lifetime of severe myopia, an experience that ends with the unexpected turn of grieving for what is lost. Her literary inventiveness mines the coincidence in French between the two verbs savoir (to know) and voir (to see). Jacques Derrida's "A Silkworm of One's Own" complexly muses on a host of autobiographical, philosophical, and religious motifs—including his varied responses to "Savoir." The two texts are accompanied by six beautiful and evocative drawings that play on the theme of drapery over portions of the body.

Veils suspends sexual difference between two homonyms: la voile (sail) and le voile (veil). A whole history of sexual difference is enveloped, sometimes dissimulated here—in the folds of sails and veils and in the turns, journeys, and returns of their metaphors and metonymies.

However foreign to each other they may appear, however autonomous they may be, the two texts participate in a common genre: autobiography, confession, memoirs. The future also enters in: by opening to each other, the two discourses confide what is about to happen, the imminence of an event lacking any common measure with them or with anything else, an operation that restores sight and plunges into mourning the knowledge of the previous night, a "verdict" whose threatening secret remains out of reach by our knowledge.

Hélène Cixous is Professor of Literature and Director of the Centre d'Etudes Feminines, Paris VIII. Jacques Derrida is Director of Studies at the Ecole des Hautes Etudes en Sciences Sociales, Paris, and Professor of Humanities at the University of California, Irvine. Stanford has published nine of his books, most recently Of Hospitality, which also includes a text by Anne Dufourmantelle (Stanford, 20

“This book is a significant event in contemporary French letters. Although Cixous and Derrida have often signaled publicly their solidarity with each other, this book conjoins their writing at an altogether new level of intensity. It is a stunningly original and moving work.”—Peggy Kamuf, University of Southern California

“...a pleasure to read, showcasing the creative friendship of two of the world’s most influential writers and thinkers.”—Philosophy in Review