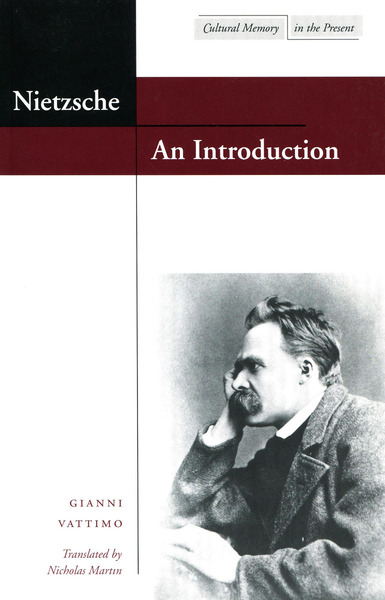 This book is both a concise and lucid introduction to Nietzsche and an original contribution to critical debates concerning Nietzsche interpretation and reception. This overview takes issue with the prevailing tendency to focus on Nietzsche's later work, which reaches its extreme with Heidegger's almost exclusive focus on the group of late notes posthumously collected as The Will to Power. Vattimo aims to mediate between two prominent hermeneutic readings of Nietzsche: Wilhelm Dilthey's view that Nietzsche's work fits into the nineteenth-century tradition of the philosophy of life and Heidegger's belief that Nietzsche is best understood as the author of a pair of ontological doctrines, the will to power and the eternal return of the same.

Vattimo aims to show that Nietzsche's early interest in cultural and historical criticism can be found throughout his corpus and that it informs, and helps to explain, Nietzsche's later doctrines and writings. This allows us to understand these later doctrines in a deeper way, to see their connections with his wider concerns, and thus to make greater sense of Nietzsche's philosophy as a whole.

This working hypothesis guides Vattimo through his elegant exposition of the basic views of the early and late Nietzsche, from the philological beginnings and the musings on Dionysus through the so-called positivist phase of the middle period up to the philosophy of Zarathustra and the fragmented insights that bespeak the will to power. Throughout, Vattimo's intellectual agenda is to present the philosophical relevance of a cultural criticism that does not let itself be reduced to a merely literary presentation of the psychology of decadence and nihilism, or to the grand ontological-metaphysical finale that Heidegger had in mind in his monumental Nietzsche studies.

As an appendix, Vattimo provides a history of Nietzsche reception in Europe that counters the narrow Anglo-American bias of much English-language Nietzsche scholarship.

Gianni Vattimo is Professor of Philosophy at the University of Turin. Among his books translated into English is Religion (edited with Jacques Derrida) (Stanford, 1998) and Beyond Interpretation: The Meaning of Hermeneutics for Philosophy (Stanford, 1997).

“This is the best short work on Nietzsche I have come across. It provides a rich understanding and convincing interpretation of Nietzsche's work from his first published book through the notes of his last productive years. Vattimo also demonstrates an encyclopedic knowledge of more than a century of European Nietzsche scholarship.”—Christopher Cox, Hampshire College