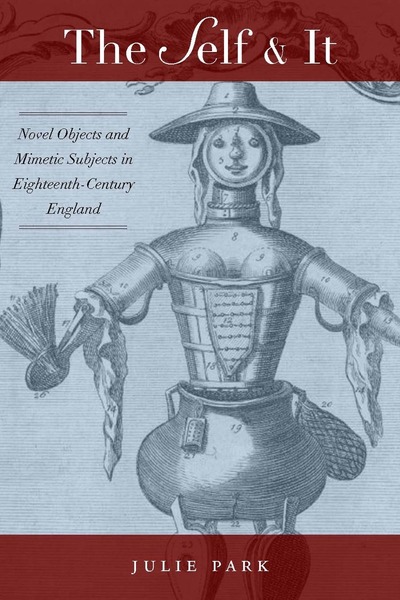 Objects we traditionally regard as "mere" imitations of the human—dolls, automata, puppets—proliferated in eighteenth-century England's rapidly expanding market culture. During the same period, there arose a literary genre called "the novel" that turned the experience of life into a narrated object of psychological plausibility. Park makes a bold intervention in histories of the rise of the novel by arguing that the material objects abounding in eighteenth-century England's consumer markets worked in conjunction with the novel, itself a commodity fetish, as vital tools for fashioning the modern self. As it constructs a history for the psychology of objects, The Self and It revises a story that others have viewed as originating later: in an age of Enlightenment, things have the power to move, affect people's lives, and most of all, enable a fictional genre of selfhood. The book demonstrates just how much the modern psyche—and its thrilling projections of "artificial life"—derive from the formation of the early novel, and the reciprocal activity between made things and invented identities that underlie it.

Julie Park is Assistant Professor of English at Vassar College. She was formerly an editor of Eighteenth-Century Fiction.

"Park imbues her eighteenth-century materials and the field of conversation around them with much needed savvy and imagination."

"Moving fluidly from literary texts to material culture, to Freudian theory, and back again, Park offers a lively and refreshing challenge to more hidebound brands of historicist scholarship . . . [The Self and It offers] a battery of clever readings, provocative conjectures, surprising juxtapositions, and unexpected aperçus that will galvanize scholars and students for some time to come."

"The Self and It is a dense, complex and ingenious book . . . Park's book represents a significant contribution to our understanding of the eighteenth century and the novel."

—Nicholas Hudson, Studies in the Novel

"[A] clever and exuberant study...Park's book is a brilliant excavation of eighteenth-century consumer culture in all its exoticism and excess, and she evokes the extravagance of fashion and leisure in the period with infectious relish."

"Many of us have been longing for a book like The Self and It. With wit and style, and drawing on inventive archival research, Julie Park here finds a novel and fascinating way of telling the story of modern gendered subjectivity. She shows how often this story has overlapped with the history of our negotiations with the object world of consumer capitalism, with its proliferating novelties and its counterfeits of the life-like. Here we have a shiny new account of the eighteenth-century fiction's novel ways of giving life to imaginary beings: an account that shows how often the novel in the course of its mimetic project collaborated with material culture."

"Park's book makes a stunningly original contribution to the study of eighteenth-century British literary and material culture. It is intellectually daring, provocative, and full of unexpected insights and suggestive juxtapositions at every turn. Its vivid reconstructions of commonplace eighteenth-century objects are fascinating, and frankly a lot of fun."

"Park demonstrates convincingly how artifacts of the eighteenth century's new commodity culture—such as automata, fashion dolls, puppets, and novels—helped create another commodity, the 'self.' Her subtle analyses, her intriguing collection of objects, and her lucid prose make this a book that will interest not only scholars in object studies or the eighteenth century but also any intelligent, curious reader."

"For Park, the rest of the world inescapably defines what it means to have an interior. Eighteenth-century writers discovered in a variety of ways that to be a subject was to see oneself reflected in a great variety of external objects. That discovery both helped to fuel the development of the novel as a new literary genre and created some interesting sources of anxiety and stress. One strength of Park's study is to present this intricate movement together and to do so—what we do, after all!—through careful and exciting attention to the forms of narration and description." 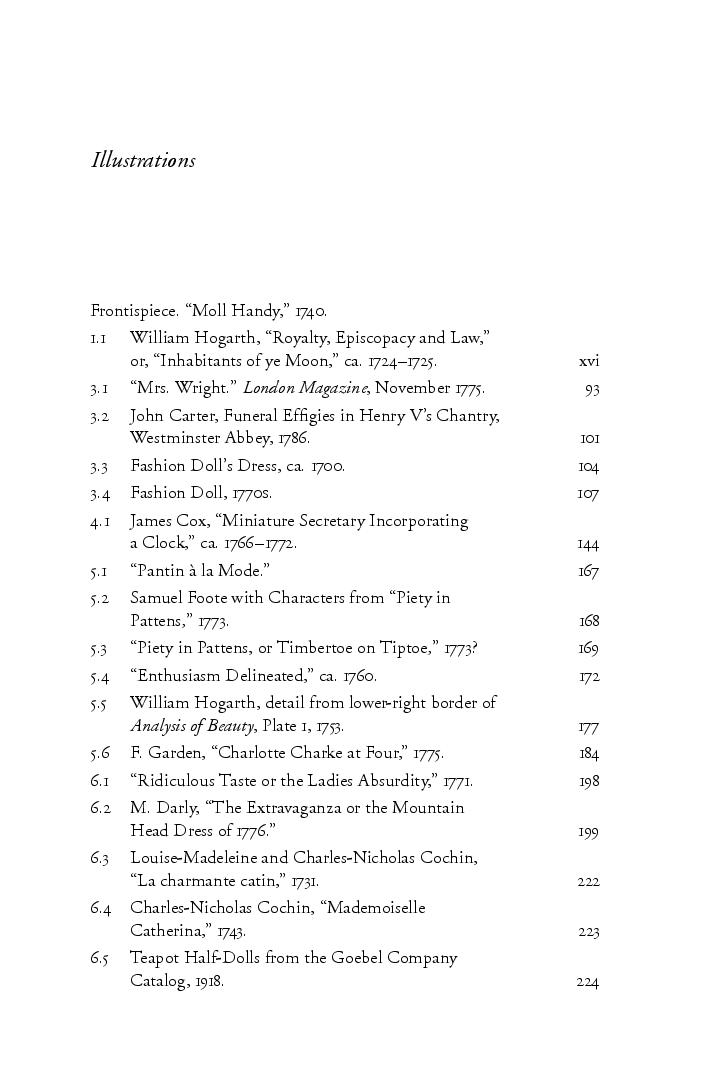 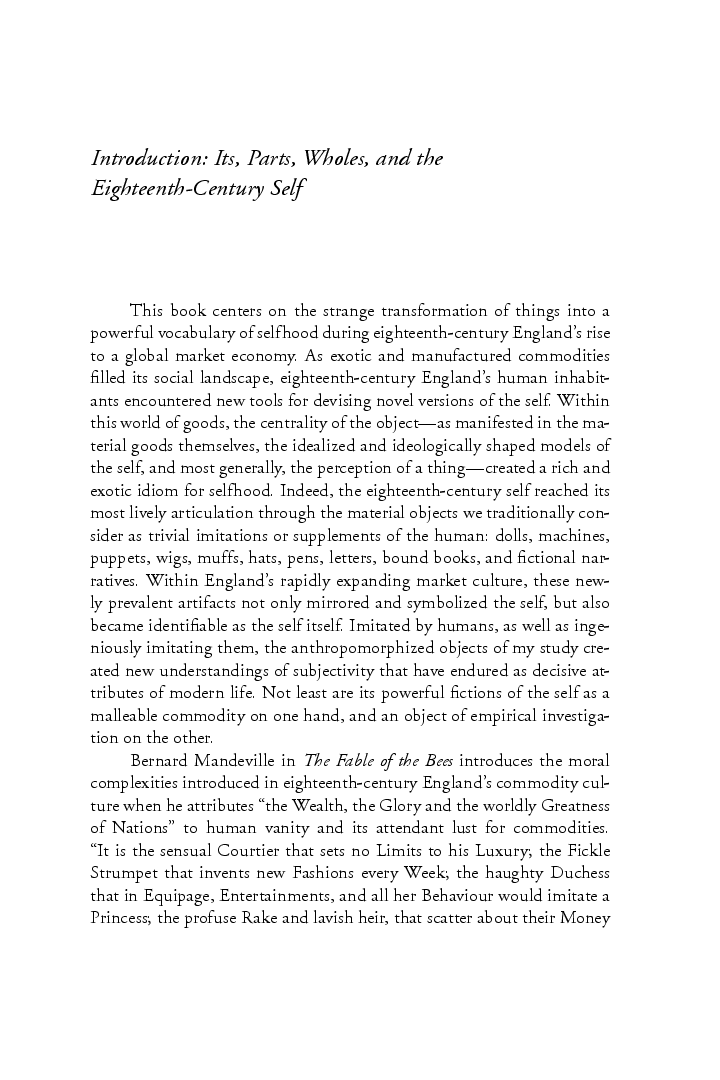 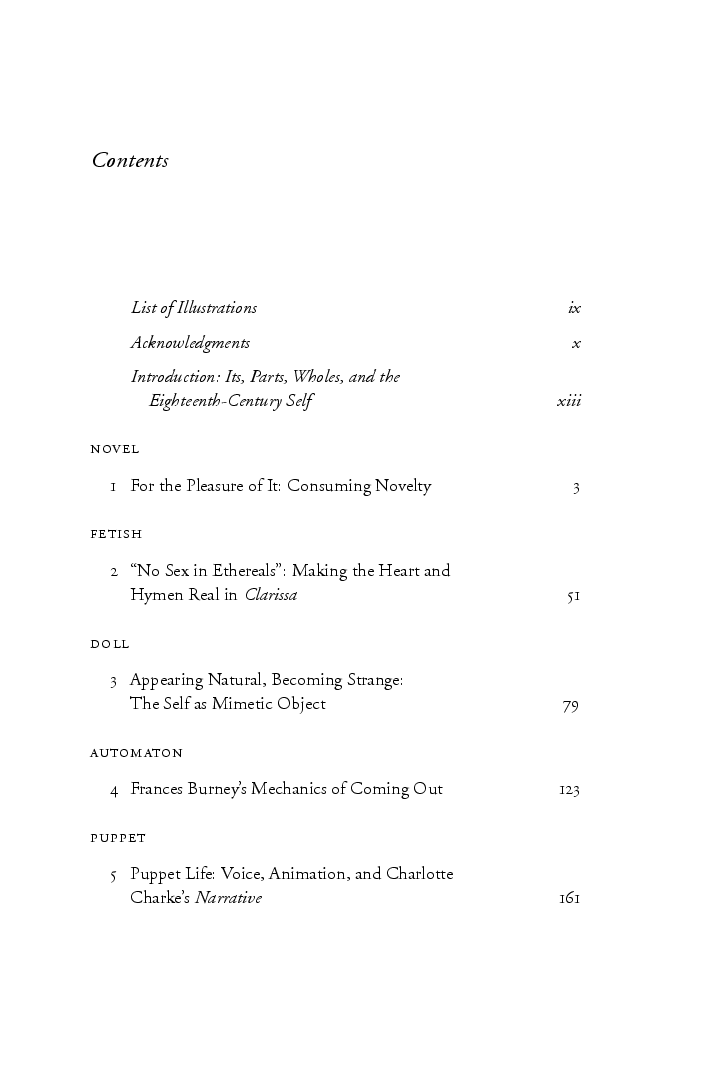