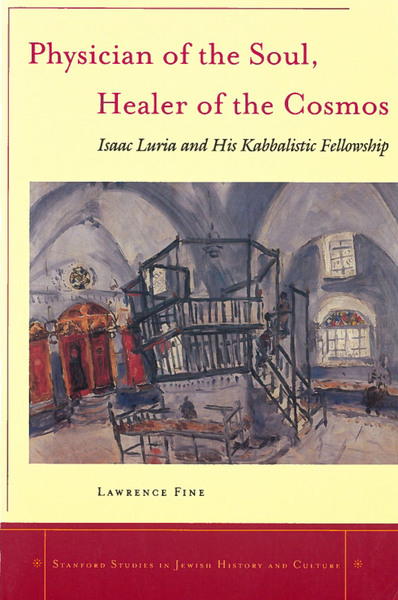 Physician of the Soul, Healer of the Cosmos
Isaac Luria and his Kabbalistic Fellowship
Lawrence Fine
SERIES: Stanford Studies in Jewish History and Culture

Finalist in the 2004 Koret Jewish Book Award, sponsored by The Koret Foundation.

Isaac Luria (1534-1572) is one of the most extraordinary and influential mystical figures in the history of Judaism, a visionary teacher who helped shape the course of nearly all subsequent Jewish mysticism. Given his importance, it is remarkable that this is the first scholarly work on him in English.

Most studies of Lurianic Kabbalah focus on Luria’s mythic and speculative ideas or on the ritual and contemplative practices he taught. The central premise of this book is that Lurianic Kabbalah was first and foremost a lived and living phenomenon in an actual social world. Thus the book focuses on Luria the person and on his relationship to his disciples. What attracted Luria’s students to him? How did they react to his inspired and charismatic behavior? And what roles did Luria and his students see themselves playing in their collective quest for repair of the cosmos and messianic redemption?

Lawrence Fine is Irene Kaplan Leiwant Professor of Jewish Studies and Professor of Religion at Mount Holyoke College. His most recent book is Judaism in Practice: From the Middle Ages Through the Early Modern Period (ed).

"...among the finest works of recent Judaic scholarship."

"We come away from this book awed by Fine's scholarship, and with a better understanding of how Rabbi Isaac Luria, who wanted his writings to be concealed after his death, nevertheless produced ideas so powerful that they transformed the nature of Judaism for centuries."

"Through masterly synthesis and organization, the author has produced the first accessible account of Luria and his kabbalah in English—or any language—that is also richly detailed and historiographically up to date."

"[Physician of the Soul] is the worthy capstone of a distinguished career spent studying the kabbalistic ideas of the sixteenth century and their importance for social and intellectual history."

"Lawrence Fine has written extensively on Lurianic thought and practice and with this eminently readable and well-researched book has produced a welcome addition to the scholarship on Kabbalism in general and Luria in particular...This book is a necessary source for anyone who wants to know something about Kabbalah and its important representatives other than the travesty of this fascinating side of Judaism that is espoused by today's popular culture."