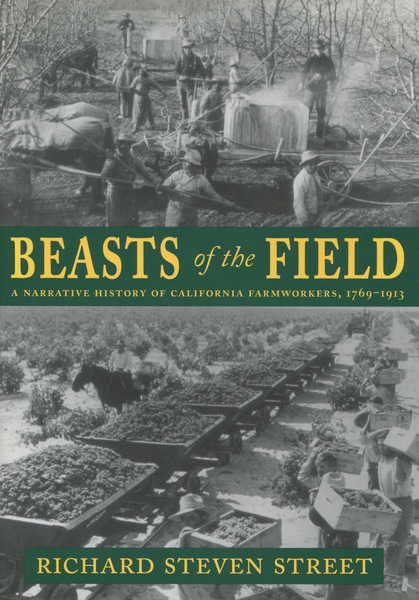 Beasts of the Field
A Narrative History of California Farmworkers, 1769-1913
Richard Steven Street

Winner, Nonfiction category of the the 2005 Spur Awards, sponsored by the Western Writers of America.

Winner of the 2004 Mark Lynton History Prize, sponsored by The Lukas Prize Project.

Silver Medal for Californiana in the 2005 California Book Awards, sponsored by The Commonwealth Club of California.

Written by one of America's preeminent labor historians, this book is the definitive account of one of the most spectacular, captivating, complex and strangely neglected stories in Western history—the emergence of migratory farmworkers and the development of California agriculture.

Street has systematically worked his way through a mountain of archival materials—more than 500 manuscript collections, scattered in 22 states, including Spain and Mexico—to follow the farmworker story from its beginnings on Spanish missions into the second decade of the twentieth century. The result is a comprehensive tour de force. Scene by scene, the epic narrative clarifies and breathes new life into a controversial and instructive saga long surrounded by myth, conjecture, and scholarly neglect.

With its panoramic view spanning 144 years and moving from the US-Mexico border to Oregon, Beasts of the Field reveals diverse patterns of life and labor in the fields that varied among different crops, regions, time periods, and racial and ethic groups.

Enormous in scope, packed with surprising twists and turns, and devastating in impact, this compelling, revelatory work of American social history will inform generations to come of the history of California and the nation.

Richard Steven Street is an independent scholar and writer. He has held a Guggenheim Fellowship and has also been a fellow at the Stanford Humanities Center. He earned his doctorate in American labor history at the University of Wisconsin, and has been an award-winning photographer and journalist specializing in California agriculture and agricultural labor. He is the author of Organizing for Our Lives: New Voices from Rural Communities (1992). He is currently finishing a multivolume history of California farmworkers.

". . . [Street] has produced a work of monumental scholarship."

"[Street's] meticulous research comes alive with his passionate prose as he documents the march of history from the "bottom up" in the tradition of E.P. Thompson's The History of the English Working Class.—California History

"In Beasts of the Field, [Street] synthesizes thirty years of research into a compelling and highly readable account written with insight and empathy."

"Richard Street's two books offer a new benchmark in the history of agricultural labor, with a perceptive, fascinating Californian focus. Only 1,283 pages? I wanted to look and read further."