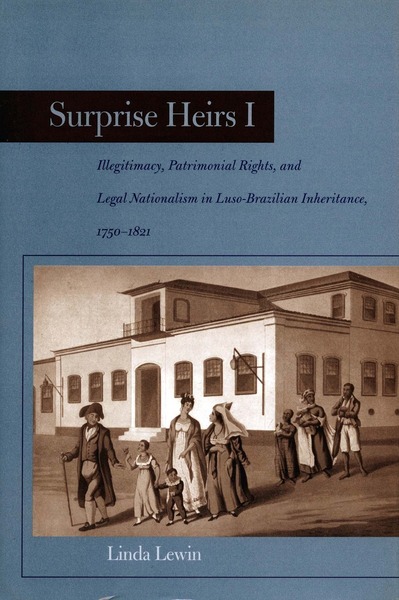 Winner of the 2003 Hubert Herring Award, sponsored by the Pacific Coast Council on Latin American Studies.

Honorable Mention in the 2004 Bolton-Johnson Prize, sponsored by the Conference on Latin American History.

Honorable Mention in the 2005 Warren Dean Memorial Prize, sponsored by the Conference on Latin American History.

This book situates the changing patrimonial rights of illegitimate offspring in Brazil within a system of Luso-Brazilian heirship that operated during the final half century of Portuguese colonial rule. Besides offering the first detailed explanation of how the rules of inheritance applied to people born outside wedlock, the book’s focus on illegitimacy and patrimony provides a new perspective for assessing how family formation figured broadly in late colonial Brazil’s social evolution.

Innovatively integrating legal history with recent research on the post-1750 history of the family in Brazil, the book reveals the significance of customary marriage and consensual cohabitation, clerical concubinage, concealed paternity, and foundling wheels for Latin American social organization. By reformulating the private law of family and inheritance, Portuguese legal nationalism transformed the juridical meaning of bastardy and anticipated the emergence of the “surprise heir,” who figured so prominently in imperial Brazil’s courtroom dramas and novels.

Linda Lewin is Professor of History at the University of California, Berkeley. She is the author of Politics and Parentela in Paraíba: A Case Study of Family-Based Oligarchy in Brazil.

"Long after most of our books have been consigned to remote storage facilities or (worse yet) weeded, historians will continue to consult Lewin's invaluable Surprise Heirs volumes."

"Linda Lewin has provided an invaluable contribution to historians of colonial and imperial Brazil. Few historians would be willing to brave the dense thicket of legal codes and commentaries that compromise the source base of this book."

"[Surprise Heirs I and II] represent a substantial and significant advance in scholarship on the legal history of marriage, illegitimacy and inheritance in Brazil."

"These two volumes [Surprise Heirs I and Surprise Heirs II] represent a major contribution to our understanding of how law relates to social realities, political agendas, and religious values. Moreover, Lewin's meticulously researched study is a sterling addition to a small but growing list of works that seriously address the social and economic effects of law in either the private or the public spheres."