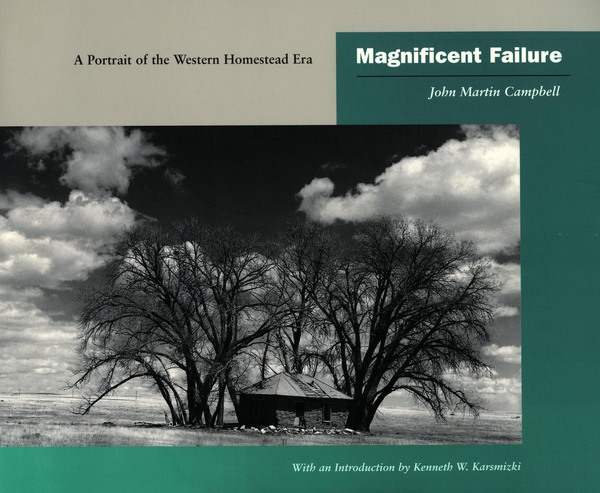 In words that are as clean and precise as his haunting, starkly beautiful photographs, the author vividly recreates the life and times of the Western Homestead Era, that period beginning around 1885 when the prairie lands lying westward from the longitude of the western Dakotas became available to pioneering farmers. Some 70 black-and-white duotone photographs, with detailed captions, record the bleak landscapes and the abandoned farms, outbuildings, farm implements, and hand tools that are mute testimonies to the failed hopes of several million families who settled on these arid and semi-arid lands.

The author explains how their failure resulted from a deadly combination of natural and economic causes. Neither the federal government nor the homesteaders themselves were aware that some of the western homestead land was so dry that artificial irrigation often was required. But irrigation was unavailable to most of these farms, and many thousands of them failed within a few years. On most of the homestead lands, however, dry farming—by which crops are watered by falling rain and snow—permitted the newcomers to plant and reap a variety of crops. For several decades, these regions produced flourishing farms, towns, railroad lines, and dirt and gravel roads.

Meanwhile, and again unanticipated by both government and the prospering farmers, the climate of these productive regions was becoming increasingly dry. This was the natural phenomenon that culminated in the Dust Bowl of the 1930s, which was coincidentally accompanied by the Great Depression. Crops went begging for lack of water, banks closed, railroads were abandoned, and the formerly prosperous homesteaders went broke by the several millions.

Historians of the Western United States have largely ignored the homesteaders. There is little romance in farming, especially when compared with that attached to cowboys, Indians, explorers, and fur traders. Still, the homesteaders were heroes in their own right. Theirs was the last great endeavor in the opening of the West, and this book, with its moving text, historical introduction, and stunning photographs, tells their story.

John Martin Campbell is Professor Emeritus of Anthropology, and Research Professor and Research Curator of the Maxwell Museum of Anthropology, at the University of New Mexico. In addition to his academic writing, he is the author of two other photographic works, Few and Far Between: Moments in the North American Desert and The Prairie Schoolhouse.

"The photos of homestead landscapes on these pages—structures, implements, fields, haystacks—speak of the work, hopes, and drought-battered lives of thousands of families."

"Campbell gives us glimpses into real western history that is just beyond the fence line north of the highway or just three miles down a dusty back road, and he brings it to life so that we may all participate."

—The Chronicles of Oklahoma

"A trained archaeologist and a gifted photographer, Campbell masterfully observes the materials the homesteaders left behind."

"The book is a 'two thumbs up' and should have a place on your American history reference shelf."