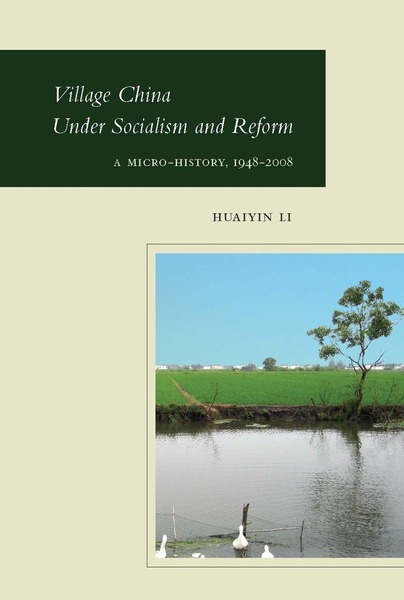 Village China Under Socialism and Reform
A Micro-History, 1948-2008
Huaiyin Li

Winner of the 2009 Cecil B. Currey Book Award, sponsored by the Association of Third World Studies.

Winner of the 2009 Academic Excellence Award, sponsored by the Chinese Historians in the United States.

Village China Under Socialism and Reform offers a comprehensive account of rural life after the communist revolution, detailing villager involvement in political campaigns since the 1950s, agricultural production under the collective system, family farming and non-agricultural economy in the reform, and everyday life in the family and community. Li's rich examination draws on original documents from local agricultural collectives, newly accessible government archives, and his own fieldwork in Qin village of Jiangsu province to highlight the continuities in rural transformation. Firmly disagreeing with those who claim that recent developments in rural China represent a radical break with pre-reform sociopolitical practices and patterns of production, Li instead draws a clear history connecting the current situation to ecological, social, and institutional changes that have persisted from the collective era.

Huaiyin Li teaches modern Chinese history at the University of Texas at Austin. He is also the author of Village Governance in North China, 1875-1936 (Stanford, 2005)

"Various scholarly projects have attempted to give an orderly account of the rural political-economy of post-1949 China, yet this book is one of the most systematic so far. . . The book builds up on a clear structure that offers a comprehensive scope of intellectual inquiry and a systematic analysis of empirical data. Attested by successive awards (e.g., the 2009 Cecil B. Currey Book Award, and the 2010 Robert W. Hamilton Award), the book is a must-read for students of modern Chinese politics!"

"Based on a wonderfully detailed and documented case study of Qin village located within Dongtai County of Jiangsu province (now Dongtai Municipality), Huaiyin Li opens a genuinely new window on the trials, travails, and successes of many local places in rural China and joins these to an equally effective analysis of some of the greater forces under which rural places in China pragmatically operated from the revolution to 2008."

"The book is a sequel to the author's well-received 2005 monograph, Village Governance in North China, 1875-1936 (Stanford University Press). Together, these two extraordinarily detailed works have done a great deal to illuminate the interior dynamics of Chinese rural political economy in the late 19th and 20th centuries."

"There is a burgeoning literature tracing change and continuity in post-revolutionary China. This book is among the best of that field. Using a rare, comprehensive collection of village accounts, records, and cadres' diaries, a series of interviews conducted during lengthy visits over a period of 14 years, and a level of access and familiarity afforded him as a native-born villager, Huaiyin Li has reconstructed the political economic history of Qin village, in central Jiangsu, between the Maoist and post-Mao periods . . . Well-written, strongly argued, and based on impressive analysis of fine-grained empirical evidence, this undoubtedly is one of the best case-studies of China's rural political economy in the latter part of the 20th century. It makes a major contribution to our understanding of political-economic trends throughout this turbulent period of history, and will serve as an important source of information for scholars and students alike."

"The book is the product of impeccable scholarship, a combination of rigorous archival research and extensive fieldwork. Huaiyin Li's firsthand knowledge and personal connections have enabled him to probe a village community's 'informal and often invisible structures', and he has persuasively demonstrated the critical role that those 'subinstitutions' have played in determining the direction of Party-peasant relations in Qin village, a microcosm of village China, during the PRC's first 60 years."

"Huaiyin Li provides a comprehensive and systematic study of rural life after the founding of PRC . . . [T]he book is refreshing in its theoretical perspective, compelling in its arguments and meticulous in the extensive details it presents of peasants' lives and production in rural China."

"Based upon extensive use of rare local documentation as well as the author's intimate familiarity with his own local community, this well-crafted analysis of rural evolutionary transformation in east-central China deserves a wide reading."

"Drawing on intensive fieldwork in his native village, Huaiyin Li's book is the first to reconstruct and analyze the grassroots political economy of a Chinese village in the Maoist and post-Mao periods. Well written and insightful, it illuminates what Chinese farmers have faced in their daily lives."

"Throughout the book, Li skillfully interweaves contextual information and quantitative data recovered from documents rarely explored by students of contemporary China . . . [T]his is a well designed and admirably executed work that sets a new standard for the study of the political economy of rural China. Readers will find it informative and inspiring." 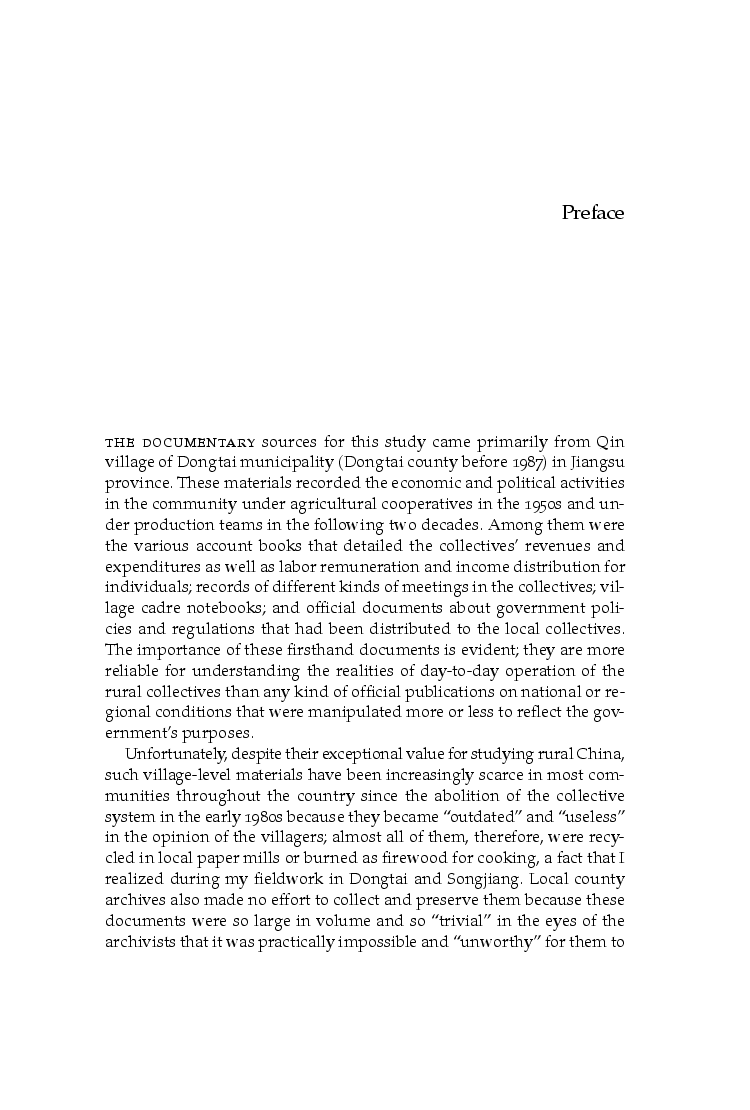 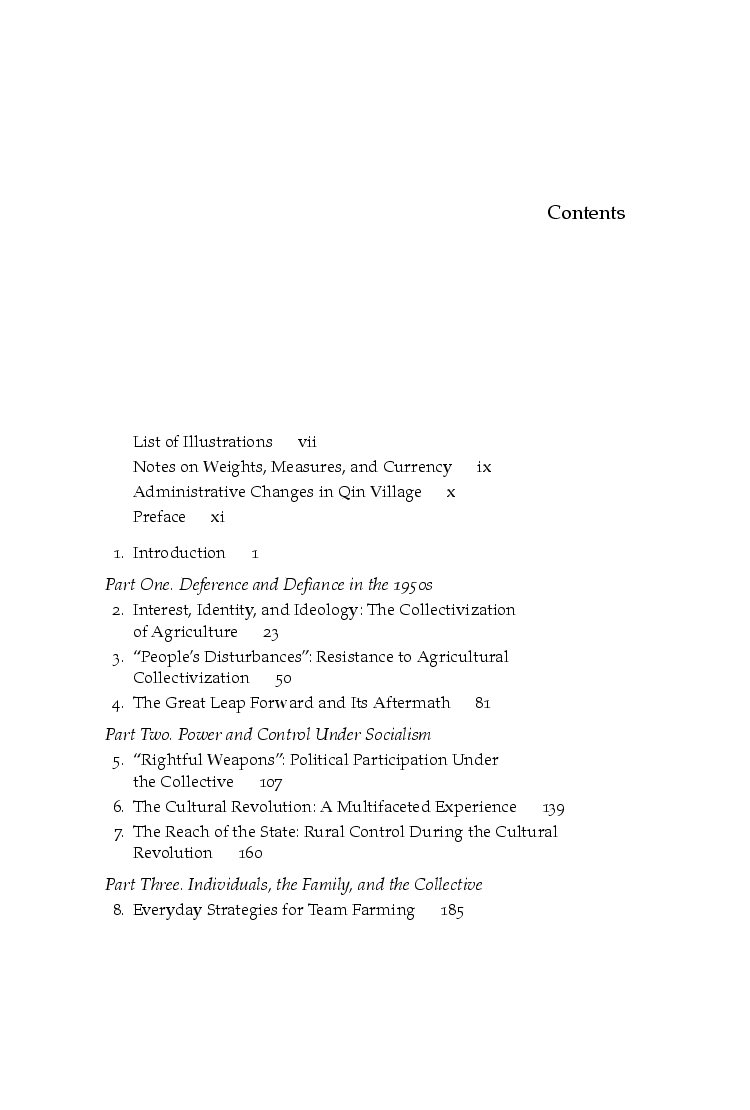