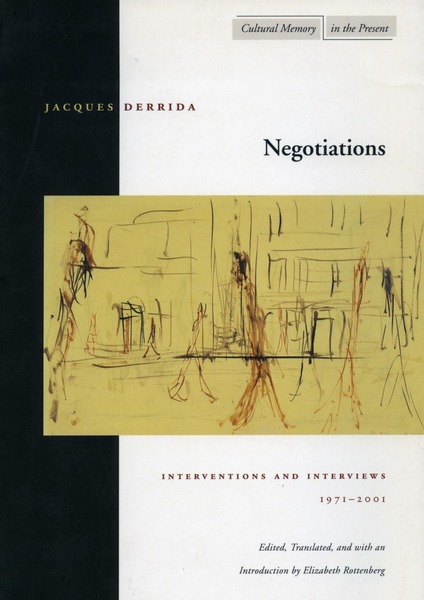 Negotiations
Interventions and Interviews, 1971-2001
Jacques Derrida Edited, Translated, and with an Introduction by Elizabeth G. Rottenberg
SERIES: Cultural Memory in the Present

This collection of essays and interviews, some previously unpublished and almost all of which appear in English for the first time, encompasses the political and ethical thinking of Jacques Derrida over thirty years. Passionate, rigorous, beautifully argued, wide-ranging, the texts shed an entirely new light on his work and will be welcomed by scholars in many disciplines—politics, philosophy, history, cultural studies, literature, and a range of interdisciplinary programs.

Derrida's arguments vary in their responsiveness to given political questions—sometimes they are vivid polemics on behalf of a position or figure, sometimes they are reflective analyses of a philosophical problem. They are united by the recurrent question of political decision or responsibility and the insistence that the apparent simplicity or programmatic character of political decision is in fact a profound avoidance of the political. This volume testifies to the possibility and the necessity of a philosophical politics.

Negotiations assembles some of the most telling examples of the intrinsic relationship, so often affirmed by Derrida in more abstract philosophical terms, between deconstructive reading practices and what is called the "political"—more precisely, politics in an almost down-to-earth, pragmatic, and commonsense use of the word. Among the many subjects covered in the book are: the death penalty in the United States, the civil war in Algeria, globalization and cosmopolitanism, the American Declaration of Independence, Jean-Paul Sartre, the value of objectivity, politics and friendship, and the relationship between deconstruction and actuality.

Jacques Derrida was Director of Studies at the Ecole des Hautes Etudes en Sciences Sociales, Paris, and Professor of Humanities at the University of California, Irvine. Stanford has published twelve of his books, most recently Without Alibi (2002) and Who's Afraid of Philosophy?: Right to Philosophy 1 (2002).

"Edited and translated by Elizabeth Rottenberg, this collection is particularly valuable in two respects: first, nearly all of the interviews and essays included in this collection have never been published in English, and they offer insight into Derrida's work that those of us whose French is mediocre have not had the chance to appreciate; second, and perhaps more importantly, there is also an interesting conceptual integrity to this book that revolves around the problem of negotiation as it comes to bear on both ethics and politics (and on the process of writing itself).—Irene E. Harvey, Penn State University

"This is truly a long-awaited volume."

"Naas' performance is to be greatly admired and his patient close-reading is both instructive and inspirational."