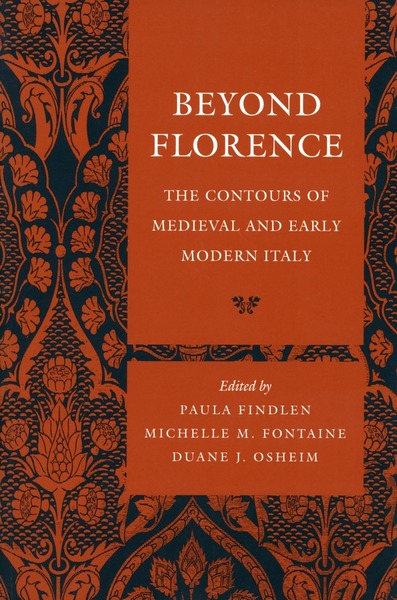 For many years English-language scholarship on late medieval and early modern Italy was largely dominated by work on Florence—as a city, culture, and economic and political entity. During the past few decades, however, scholarship has moved well beyond the “Florentine model” to explore the diversity of Italian urban and provincial life—the “many Italies” that stretched from the Apennines to the Mediterranean. This volume brings together a group of sixteen urban, social, religious, and economic historians of late medieval and early modern Italy whose work reflects this shift, and illustrates some of the significant new research directions of the field.

At the volume’s core are questions important to all historians of late medieval and early modern Europe: What does the new work on Italy beyond Florence have to say about the traditional definition of the Renaissance, a definition that made Florence its paradigmatic expression? What new questions about the period in general have emerged as a result of decentering the Renaissance? How has the effort to view Florence in a wider set of Italian and Mediterranean political and economic networks shed new light on the history of city states? And how has this work led to a reexamination of the continuities connecting the late medieval world to the early modern period?

In exploring the contours of Italy from the eleventh through the seventeenth centuries, the volume creates a landscape against which to evaluate the current state of Florentine studies, the resurgence of Venetian studies, the renewed interest in Italy under Spanish rule, and the development of many other regional and local histories that are increasingly used by scholars to facilitate a broader understanding of Italy as a whole.

“The quality of the individual essays is extraordinarily high, representative of the very best work being done in this field. The volume provides a model for the comparative study of Italian culture.”—James Hankins, Harvard University